View renderings of the new entrance and concourse layout, as well as the new player entrance and The Vault, a premium club experience, as Bank of America Stadium prepares to host Charlotte Football Club from next spring.

Bank of America Stadium’s hosting another professional sports team soon. That requires some changes to the 26-year-old building, from the ground up.

Construction has started on soccer-specific renovations that will transform Charlotte FC’s home into an elite venue for Major League Soccer (MLS).

David Tepper has invested millions in ensuring the Panthers have best-in-class facilities, and he’s doing exactly the same for Charlotte FC.

The stadium enhancements are designed to provide the ideal environment for soccer. We looked at Premier League venues and many other stadiums around the world to ensure this is a truly great experience for our players and fans.

The Lowe’s East Gate, which is the most-used entrance at Bank of America Stadium, will be upgraded to improve traffic flow, and will feature a striking 210ft-wide single LED screen.

We felt compelled to create a very special, larger-than-life entrance gate and it will be one of the most iconic gate entries in Major League Soccer. This central gate will act as a focal point for fans in their journey to the stadium, and for us, it helps to represent the unity of the crowd. Crucially, it will also serve as the main entrance for our most loyal fans in the supporters’ section.

The two ‘Indomitable Spirit’ Panthers statues that currently flank the Lowe’s East Gate will remain, but move further apart to improve traffic flow in and out of the stadium. The new entrance will lead directly into the improved main concourse, which will house two brand-new taprooms and state-of-the-art food and beverage stations. Multiple points of sale and touchless kiosks will create a seamless experience for fans on the way to their seats. The improved concourse will lead directly to the supporters’ section behind the east goal, where Charlotte FC’s most fervent fans will be cheering the team on.

A brand-new MLS-mandated central player entrance tunnel will be located on the north touchline, in a space currently occupied by a workshop and storage facilities. Surrounding the tunnel will be The Vault, a new premium club area. The tunnel will lead directly to the new ultramodern home locker room, ensuring Charlotte FC’s players will enjoy a short journey to the field.

The new player tunnel bisects The Vault, which will offer a unique tunnel club experience for around 250 fans and include field seating for around 125-150 fans.

The Vault is our take on a concept that has had success in Major League Soccer, as well as stadiums throughout the world. In addition to field-level seating along the north sideline, fans will be at the heart of the action when the biggest stars in MLS make their way out of the locker room and onto the pitch. It’s going to be an incredible experience for both the fans and players.

The locker room is the traditional sanctuary of a soccer team—and Charlotte FC’s inaugural roster will enjoy world-class facilities before, during and after matches. While the visiting locker rooms will be situated further from the tunnel (away teams will walk past The Gallery field suites behind the west goal to reach the tunnel), the home locker room will be located just a few feet from the entrance to the field.

The new locker room facilities put Bank of America Stadium among the world’s elite. This will bring extra motivation to our team, and in turn, offer a competitive advantage.

The renovations began in March 2021 and will be completed in time for Charlotte FC’s first kick in 2022. Additional upgrades include the transition to full colour-changeable LED stadium lights, and the construction of additional camera positions to enhance the television viewing experience. 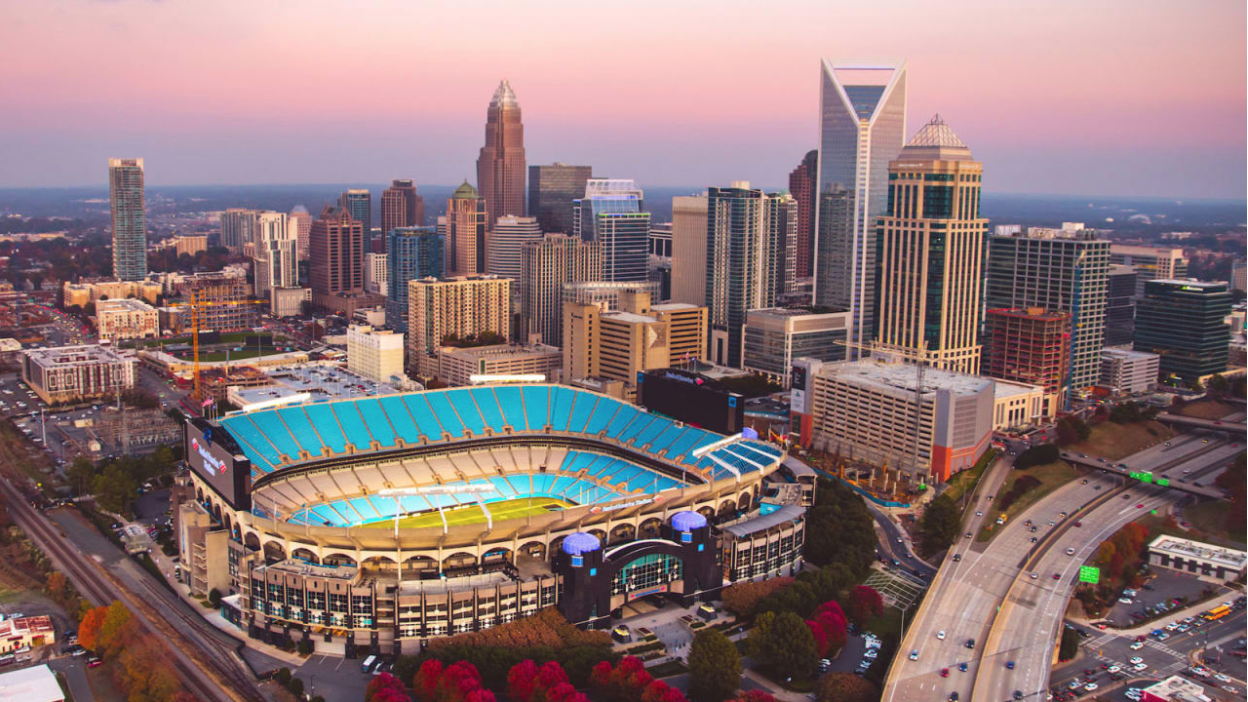 With the addition of Charlotte FC, there could be up to 30 professional games a year played in the Bank of America Stadium. Based on that increased activity, Hart acknowledged that the organisation is making the switch to FieldTurf in order to provide a consistent playing surface.

In addition to a full slate of NFL and MLS games next year, there are more college football games (Appalachian State-ECU on Sept. 2 and Clemson-Georgia on Sept. 4, as well as the ACC Championship and Duke’s Mayo Bowl) on the docket, along with the potential for high school football games, Charlotte FC Academy matches and plans for many more events. There are already holds for concert dates into 2022, when the music industry expects to be back in full swing after being shut down during the COVID-19 pandemic. There are discussions about many other events (sports and otherwise) in the future as well, and the stadium has already been used for early voting, mass vaccination events and festivals.

[David Tepper’s] vision is for the building to be a community asset. With two major professional sports franchises using Bank of America Stadium, and more events upcoming, having a natural grass surface is going to be a heavy lift. We believe a synthetic surface provides the best solution.

While some might not think it’s an ideal decision, it’s a practical one, giving them the ability to flip the facility for a high school game on Friday, a college game on Saturday, an NFL game on Sunday and a midweek soccer match. There have been calls for years for the stadium to be more accessible beyond NFL contests and a few college football games each year. There’s also an aesthetic element, as an artificial surface eliminates the problems of painted lines on the field for different sports, meaning Charlotte FC won’t have to play on top of faded Panthers logos or hashmarks in the middle of the field, and vice versa.

FieldTurf products are already used in five other NFL stadiums (Atlanta, Detroit, New England, Seattle and New York Giants/Jets) and 11 other NFL practice facilities (those six teams plus Green Bay, Philadelphia, Pittsburgh, Tampa Bay and Washington). Installing a FieldTurf product will also be consistent with what the Panthers practice on in the Atrium Health Dome behind the stadium.

In MLS, Charlotte FC joins five other teams playing on artificial surfaces (Atlanta, New England, Portland, Seattle and Vancouver). The surface at Bank of America Stadium is FIFA Quality Pro certified, and four other MLS teams already play on FieldTurf, including Seattle, Atlanta and New England, where the football and soccer teams share playing fields. There are also 13 practice facilities in MLS that feature FieldTurf.

By making the decision now, work will likely begin within days, and is expected to be completed by the summer. While the lifespan of the FieldTurf surface could be up to 10 years, Hart said the plan is to replace the top layer every two or three years.

The next edition of ALSD International is being hosted by Liverpool Football Club September 6-7, 2021, and will feature a high-level conference, exhibition and networking events, as well as technical tours of Anfield, Everton’s Goodison Park and M&S Bank Arena Liverpool on the ACCL campus.