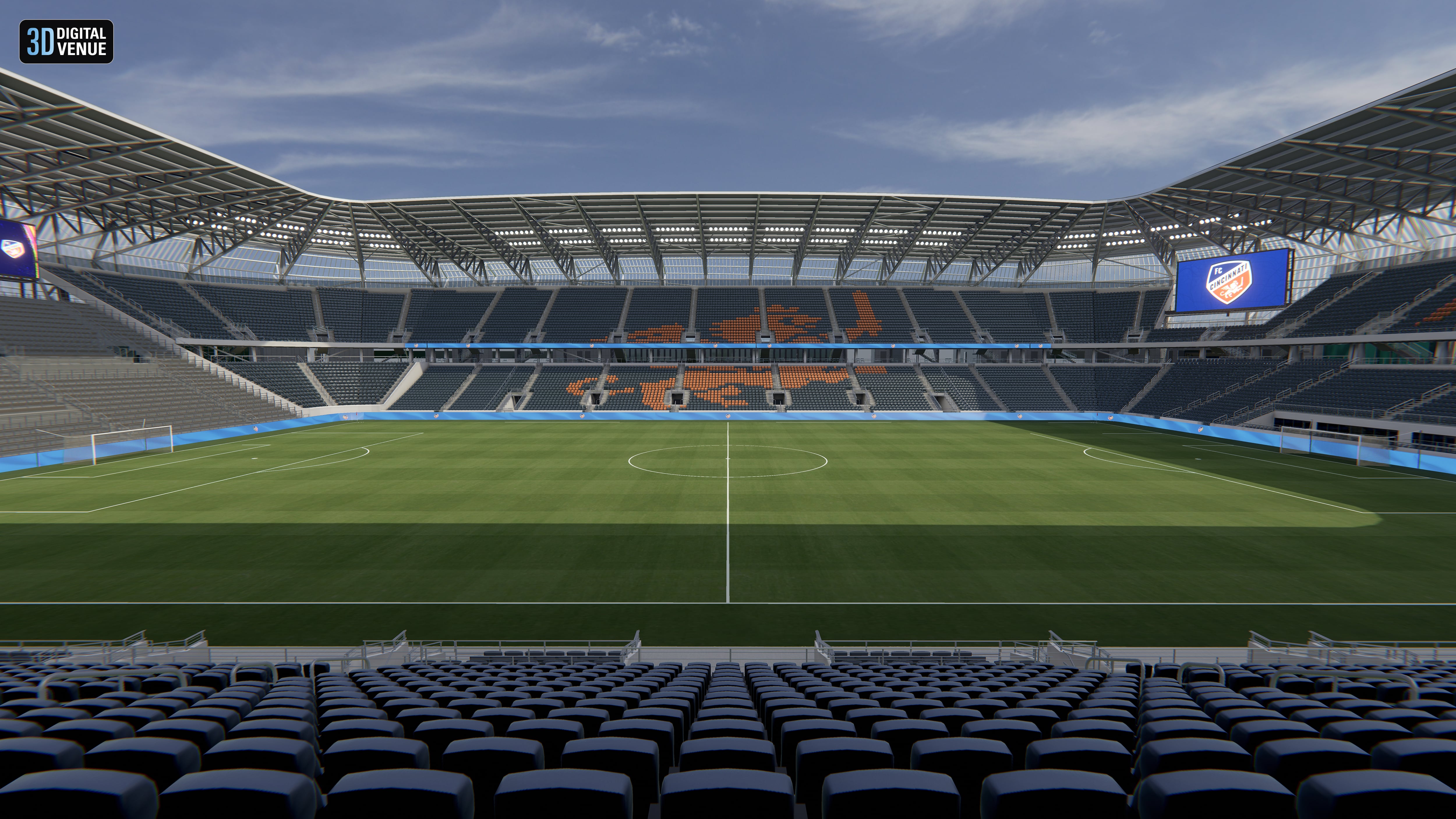 Although not opening its doors until 2021, fans and VIP buyers can now take a virtual look around the latest entrant to the MLS, FC Cincinnati’s 25,500-capacity West End Stadium, and the team can start organising the technical aspects of the transition to the new venue, thanks to technology from 3D Digital Venue.

Major League Soccer (MLS) is in the midst of an unstoppable expansion, gathering more and more American supporters and attracting the attention of international spectators. One of the latest franchises to enter the hallowed halls is FC Cincinnati, which succeeded in being one of the new teams selected to enter MLS.

With the approval of the team’s incorporation, ambitious plans were drawn up for the construction of a top MLS stadium. West End Stadium will become the new home of FC Cincinnati, with a capacity of over 25,500 fans and a modern and welcoming design.

Although the opening is scheduled for 2021, it is already possible to see what the final look of the stadium will be like thanks to its 3D representation.

The 3D Digital Venue (3DDV) team has been responsible for the virtualisation of West End Stadium, with the goal of providing fans with an accurate view of their new home, as well as to start organising the technical aspects of the transition to the new venue. This is possible thanks to the technology provided by 3DDV, which allows for an accurate interpretation of all aspects of the venue, such as seat positions, colours, textures and materials.

The result is a 3D model in the form of a widget that is integrated into the teams ticketing platform, SeatGeek, making the season ticket buying process both visually appealing and simple for all FC Cincinnati fans in their first season at the new stadium.

In addition, all the VIP spaces have been virtualised to offer future guests a true representation of the premium area amenities. Customers interested in this type of product will be able to see the exact suite or club they are interested in, as well as its decoration and view perspective of the pitch. 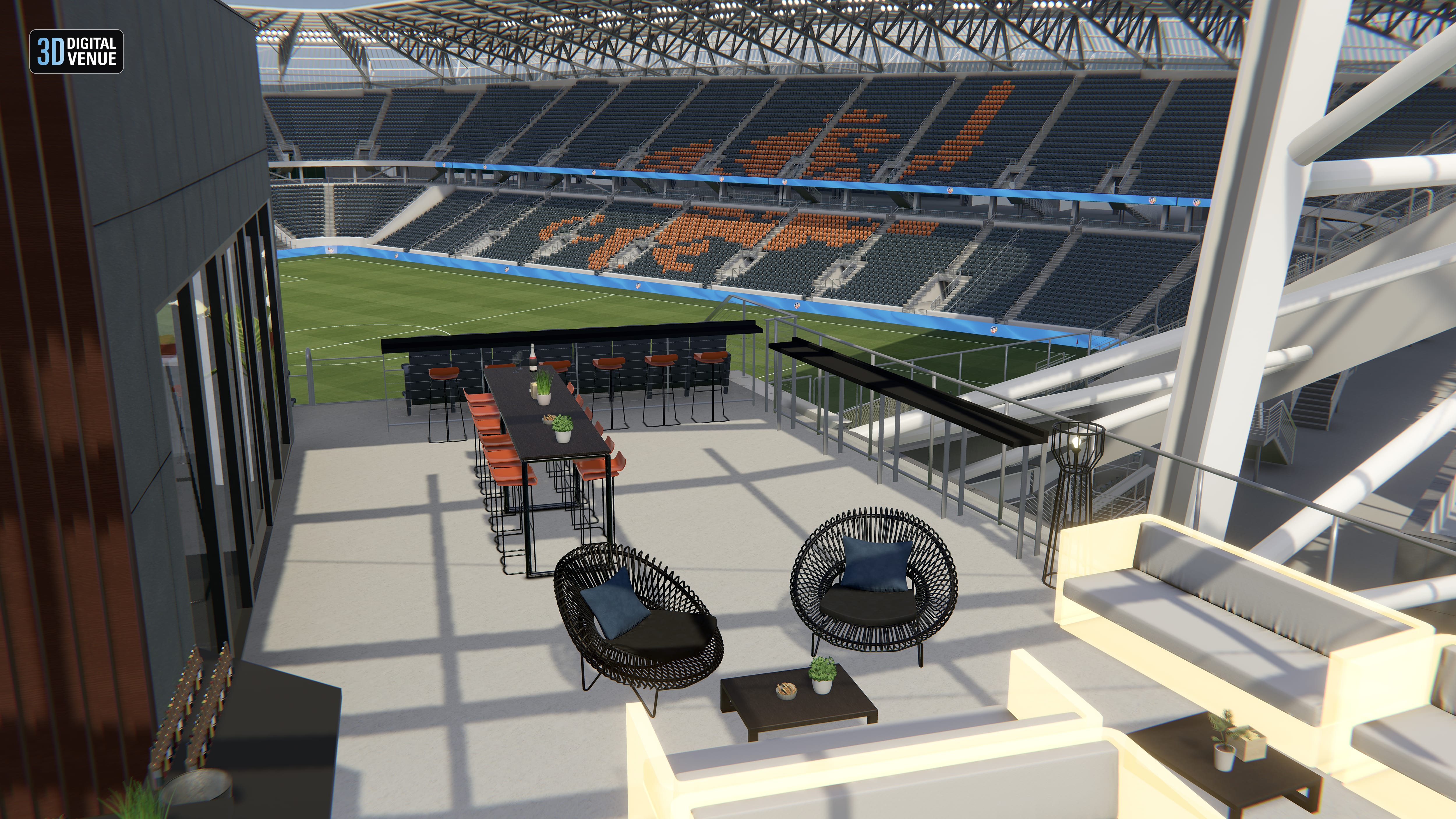 All of the VIP spaces at West End Stadium have been virtualised to offer future guests a true representation of the premium area amenities. Customers interested in this type of product will be able to see the exact suite or club they are interested in, as well as its decoration and view perspective of the pitch

The US$250m, privately funded stadium will have a 25,500-capacity, with the closest seats within 15ft of the field. The design includes 53 traditional suites and 4,500 premium seats throughout four premium club spaces. Additionally, the team’s famous supporters’ section, The Bailey, will grow to be more than 3,100 strong and loom over opponents at a 34-degree angle at the stadium’s north end.

3D Digital Venue (3DDV) is a technology solutions company that creates 2D and 3D images of stadiums, arenas and other types of live event spaces, offering ticket buyers the opportunity to view the venue, and their view of the performance area, during and after the ticket buying process.

Founded in 2012 and headquartered in Barcelona, Spain, the company technology currently integrates with over 35 different ticketing platforms in 20 countries, virtualising some of the most iconic venues in the world, including STAPLES Center in LA, Wembley Stadium in London and Stadio Olimpico in Rome.

We’re proud to introduce 3D Digital Venue (3DDV) as the latest VIP Sponsor to join Sports Venue Business (SVB). For further information on their industry-leading solutions, clicking on the banner above…