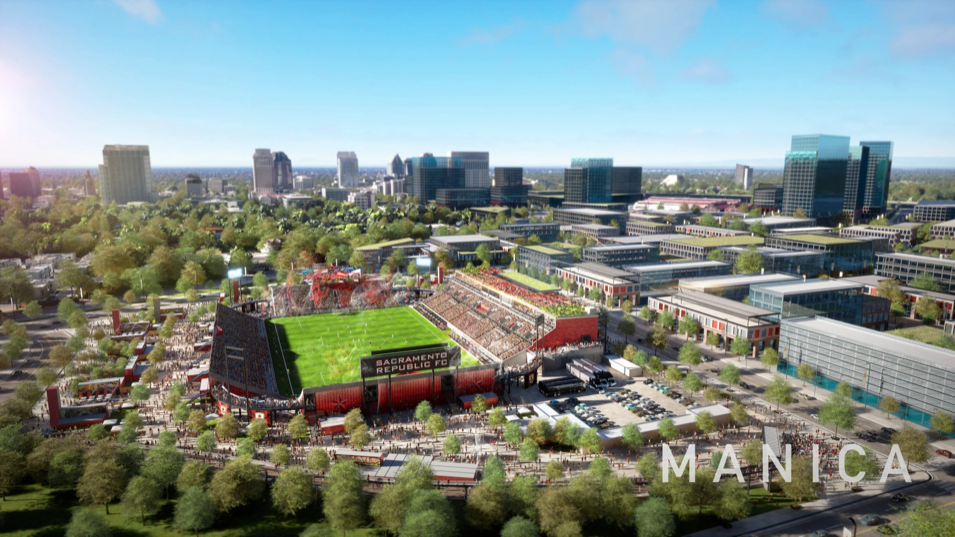 Republic FC Owner and Chairman Kevin Nagle has announced a new vision for a Railyards Stadium to create a community asset that will help Sacramento accelerate its recovery from the pandemic and provide a new downtown home for sports and entertainment. As part of the announcement, the club released a preliminary rendering of the new stadium concept.

We want to build a world-class soccer stadium in The Railyards, and to begin the next decade of Republic FC. We’re ready with a new vision that allows us to take our destiny into our own hands, and to create a community asset that will grow with the team and city.

During 2021, as the club continued to pursue investors for an MLS expansion club, Kevin Nagle recognised the region’s need to help jumpstart a recovery from the effects of the pandemic with a new community asset – and began exploring ways to build upon the agreements made for an MLS expansion club and bring a soccer-specific stadium to life in Downtown Sacramento.

The new vision for a world-class facility will:

The club has engaged industry leaders MANICA Architecture and Machete Group, who have designed and managed showcase projects – including Allegiant Stadium, Chase Center and TQL Stadium – to craft an initial concept that can meet the goals of the club and city.

I’m grateful to Kevin Nagle for his partnership and his commitment to Sacramento. As a city, we are open to pursuing dual tracks. We continue to identify and work with potential Major League Soccer investors, and at the same time we’re ready to work together on an adaptable stadium in the railyards. It’s not one or the other.

Railyards Stadium will anchor an investment nearing $1 billion dollars that will accelerate development throughout The Railyards – invigorating the 242-acre district which has sat dormant for over 50 years. Beyond the stadium, the team will lead mixed-use, housing and retail development projects – all of which will help double the size of Downtown and create a hub of activity for the region.

Sacramento is an incredible market for soccer, and we’re excited to see how Republic FC can continue to impact the community with a world-class stadium. The USL is in an exciting phase of strategic growth, and visionary development projects like the one Republic FC and the city of Sacramento are undertaking will elevate the game for fans and players in the United States for years to come.

With a new facility, Republic FC can continue to be a vanguard club in the USL as the organisation accelerates its growth in the lead-up to the 2026 FIFA World Cup being hosted in the United States, Canada, and Mexico. The USL is the fastest-growing soccer league property in the world. The USL Championship will expand to 36 clubs by 2026.

Eleven USL venues have been constructed since 2013, with plans to develop more than 30 more in the next four years. The USL is also playing a leading role in the growth of women’s soccer in the United States by launching the USL W League, an elite pre-professional league with 44 clubs, this year, and launching the USL Super League, a new fully professional league, in 2023.

As the club’s plan to build Railyards Stadium progress, the team will unveil new elements of the venue, host fans and community members for town halls to help create an unmatched fan experience, and share more on how it will develop the district around the facility.

Sacramento Republic FC is one of the premier clubs in USL Championship. Over the course of eight seasons, Republic FC has reflected the Indomitable nature of California’s Capitol City, breaking league records year over year, winning the 2014 Championship in its inaugural season, and sparking a regional passion for soccer.

As the organisation enters its ninth season, the club led by Kevin Nagle will continue to invest in Sacramento, with plans to build a soccer-specific stadium that will redefine entertainment in Sacramento, and rise to the topflight of American soccer, as well as support various community investment programs to serve the city, create innovative partnerships, operate the region’s premier youth soccer development academy, and support the development of youth soccer players throughout Northern California.