Club Atlético Osasuna will invest more than was planned to build a new roof for the entire El Sadar ground and also create additional commercial space making it possible to use the stadium more days of the year.

Several LaLiga clubs have been working to redevelop or build new stadiums over recent years, creating modern venues that offer the latest in hospitality, commerce and match experience.

Club Atlético Osasuna (CA Osasuna), located in the Spanish city of Pamplona, is the latest club to embark on a redevelopment project, improving its El Sadar ground to bring it into line with the latest standards and following improvements recently made at venues such as Villarreal’s Estadio de la Cerámica, Real Sociedad’s Reale Arena or the brand new stadiums like Atlético Madrid’s Estadio Wanda Metropolitano, RCD Espanyol de Barcelona’s RCDE Stadium and Athletic Club’s San Mamés.

Given that CA Osasuna belongs to its members, it is a unique club that provides fans with an active and fundamental role in how it is run. They were asked to vote for their preferred stadium redevelopment plan and, from the five proposals available, opted for the plans titled ‘the Red Wall’. Following through with this plan, the club from the Navarra region of Spain has made a multi-million investment to increase the capacity and to make El Sadar even better for the club’s supporters. 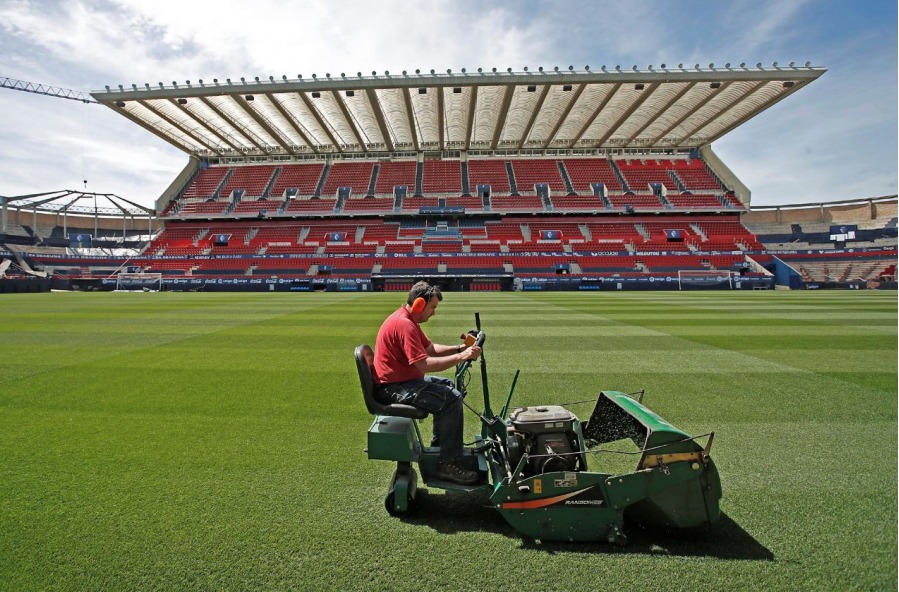 Improvements to the original plans

During these renovation works at the stadium, some unique opportunities have come up. Although it wasn’t in the original blueprints, the chance to build one complete roof that covered all the stands emerged.

Redeveloping an old stadium is more complicated than building a new one, so as the works progress it’s possible to come across issues that need to be solved.

Explaining the modification to the plans for the roof, Zuza said:

The plan was to change the roof on three of the four sides of the stadium and to leave the roof as it currently is on the other side. But when works began we found out that the state of that area was worse than we thought and that the works we had planned were not going to be enough. 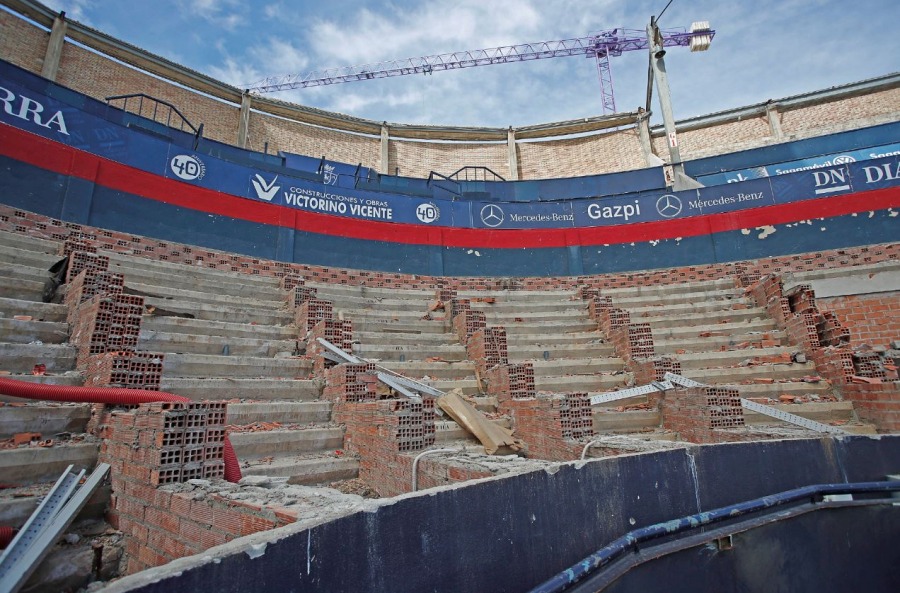 Various options were considered throughout the year and finally it was decided that if we did not carry out a complete change of the roof we were going to generate more problems. So instead of having one old part of roof and three new parts, which were not going to be connected, the board approved plans to build one roof for the whole stadium.

In addition to the new roof, the club will add a large amount of space on the ground floor for commercial opportunities, as Zuza confirmed:

The chosen stadium project has three levels, one at street level, another five metres up and another 12 metres up. The fans will enter by going up the stairs and in through one of the upper levels. As such, the entire lower floor will be available for commercial outlets that could previously only be located in two corners of the ground. Currently there are two restaurants here, which will also be expanded.

CA Osasuna previously had 1,400 square metres of commercial space, but has now created an additional 2,000 square metres. The plan is for these establishments to be used all week and not just on matchdays. To help attract customers, they’ll face out onto the street on three of the four sides of the ground.

Regarding the stores themselves, CA Osasuna’s plan is to focus on catering and sporting offerings. A gym could also be installed, while the official club store will be expanded. 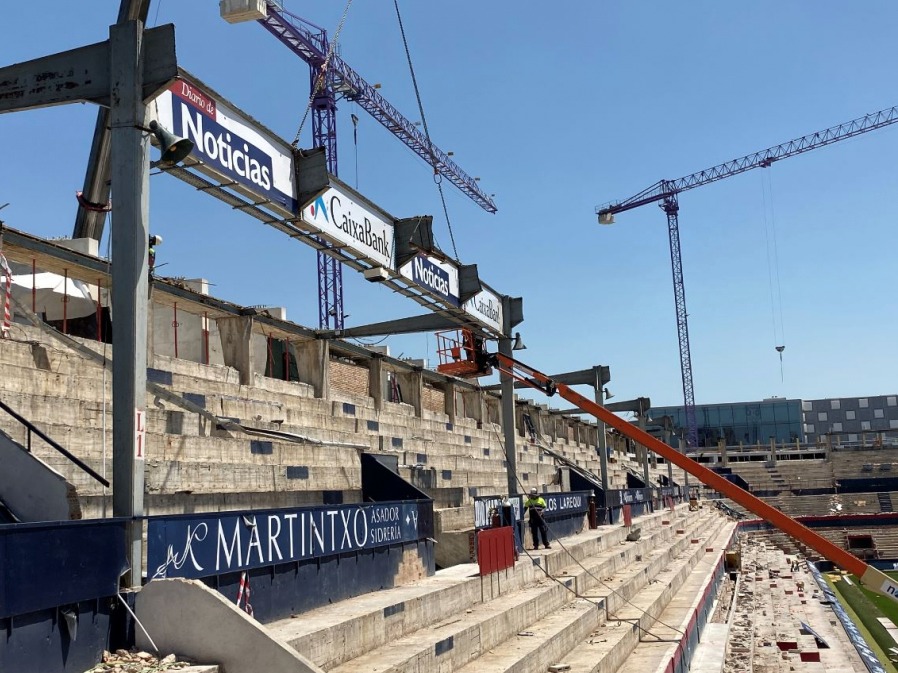 Given that the stadium is located near the Navarra Arena, the main venue for concerts in the city of Pamplona, this is expected to bring advantages to the club, as Zuza pointed out:

The commercial spaces could be interesting for the days of concerts or other events in the arena.

Inside El Sadar, new seats will be put in all around the stadium, representing a change to the original plans. The original thinking was to only install new seats in the part of the stadium where the capacity was being extended, but after achieving promotion to LaLiga Santander at the end of the 2018/19 season, the club decided to expand this.

The Board of Directors felt that all season ticket holders should notice the improvement of the facilities and not just the 6,000 spectators that will be sitting in the new areas. It will involve an outlay of approximately €1M to replace some 17,000 seats.

In addition to this, around 1,300 UEFA-approved rail seats will be installed across twelve rows in the south stand to create a standing section that will add to the atmosphere, creating the ‘Red Wall’ that the stadium plans refer to.

The inclination of this stand was going to be a little different from the others. But now all sides will be the same, with twelve uninterrupted rows from the pitch level.

As for the old seats, CA Osasuna will be distributing these around the Navarre region to 120 clubs to which it is linked. These smaller clubs can benefit from these seats from El Sadar, especially as many of their facilities didn’t previously have seats at all. Around 1,800 of these seats will also be installed in the club’s sports city in Tajonar.

The most cost-effective reforms in Europe

The first building work to take place was the reform of the changing rooms at the request of the club’s technical staff, as Zuza outlined:

This was not initially planned, but it was done in order to start the first match of the season with these works already completed. We have invested in the changing rooms, doubling the size of the home changing room and adding a second floor with an activation room. We have also reformed the media room, the anti-doping room, the referee’s changing rooms and the presidential suite, while we will add new offices for marketing and communication, as well as a multipurpose meeting room.

Throughout this whole process, those in charge of the project have paid close attention to the cost, which will be between €16m and €19m, depending on final analysis of the current season. This works out at around €800 per seat, which the club claims to be lower than any similar project across Europe. The closest equivalent is said to be at Udinese Calcio’s Dacia Arena, where it worked out at around €900 per seat. 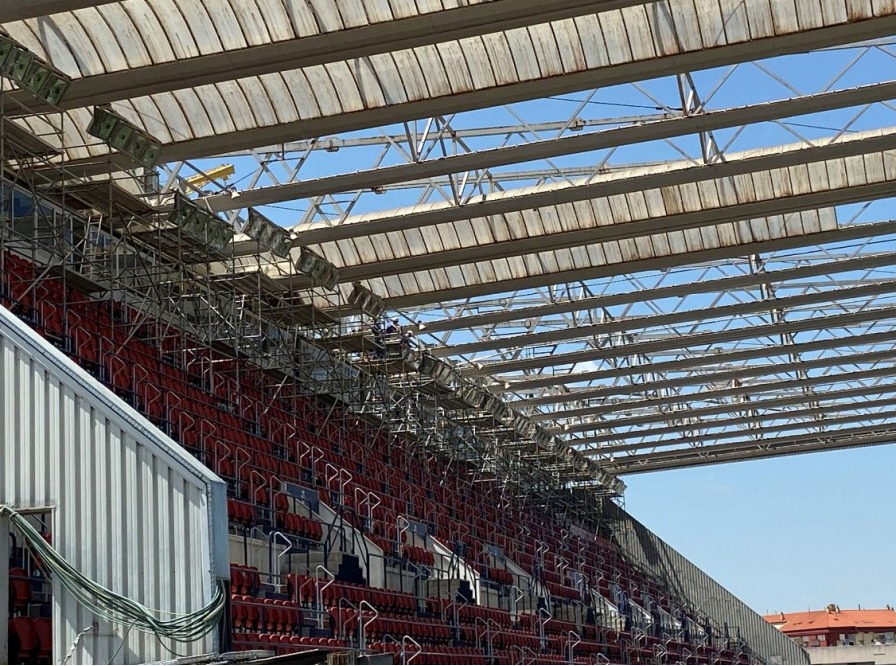 The capacity at El Sadar is increasing as part of this work, reaching a total capacity between 23,500 and 23,600. This represents a reduction of 800 to 900 seats based on the original plans, because of modifications requested by the local Navarre government, the creation of a larger press area and the expansion of some boxes and sections for fans with reduced mobility. Fans with disabilities will find supporting their team a lot easier as the new-look stadium will have an elevator at each corner of the ground.

In all areas, the remodelling and expansion work at El Sadar is progressing at a good pace and the club continues to plan for the whole stadium to be operational by October.

In June, the stadium will grow in height, up to 29 metres, while the new stands will be installed. Shortly before mid-July, the trusses that hold the roof will begin to arrive and the idea is that they be installed during July and August.

The roof itself will be installed between August and September, followed by the lighting and the PA system. Meanwhile, all the interior rooms will be completed. By the end of September or beginning of October the bulk of the work will be finished.

LaLiga’s staged approach to resume training was approved by sports and health authorities to provide consistency and safety for all clubs. Players are now involved in training sessions with their full squads, with the competition due to restart June 11.

LaLiga will be running a panel session at the next edition of ALSD International – Europe’s leading event for the Premium Seat & Sports Hospitality sector – taking place at Liverpool FC’s Anfield Stadium this October, 12-13. The conference will examine how to increase revenue through new builds, renovations, service expansions & the latest technology.