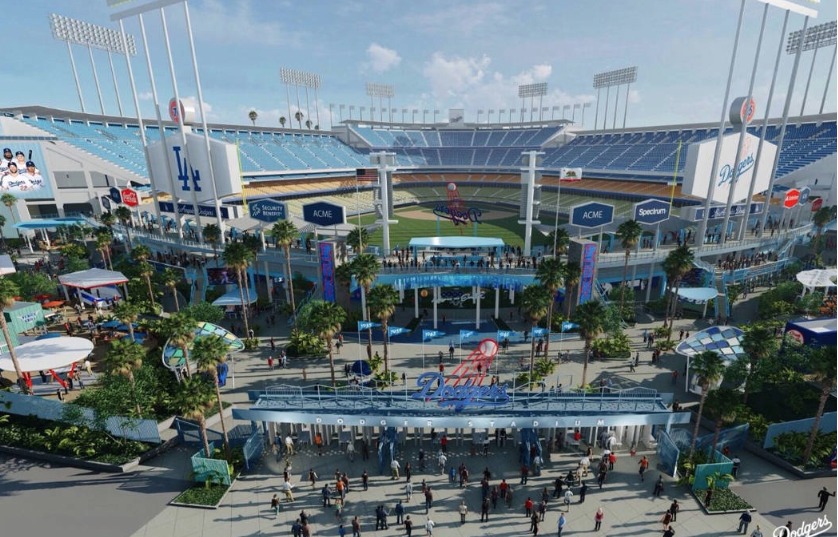 The Los Angeles Dodgers have unveiled plans for a US$100m upgrade to their 56-year-old Dodger Stadium, which will include a new main entry gate and an almost two-acre landscaped fan plaza that will bring the game to this new entry via video and LED boards, plus a new sound system.

The Dodgers unveiled the host of renovations and stadium improvements for 2020 during a recent press conference.

We want to stay traditional with regard to baseball, but we also want to have up-to-date renovations for the next generation of fans.

While most of the works will be completed by opening day, the new statue of Koufax will be formally dedicated at some point during the season.

Kasten said of the renovations, which will commence in November:

We’re going to take every minute we need to get it done, but it’s going to be done by opening day.

These developments follow hot on the heels on a series of renovations, service expansions and stadium improvements completed at Dodger Stadium in recent years, as outlined below:

The Top of the Park store at Dodger Stadium has been remodelled for a modern shopping experience for Dodger fans. Also at the Top of the Park, fans will notice two new additions to the Bank of America Retired Numbers plaza, five-foot microphones for Vin Scully and Jaime Jarrín.

The Dodgers have also increased the number of Self Service Concession Kiosks throughout the ballpark to expedite ordering at concessions stands.

In addition, four Ashley HomeStore chairs have been installed to create ‘Home Sweet Home Seats’ on the Loge Level at Dodger Stadium, where fans can enjoy the game from after entering to win at participating Ashley HomeStore locations.

Fans will also notice signage and activations from new Dodger partners, such as UCLA Health, Q CELLS and Blue Shield of California.

All beverages at Dodger Stadium will come with recyclable drinkable lids, and the Dodgers and Levy have moved to using paper straws, which will be available only upon request from guests.

Esquite: Corn in a cup topped with mayo, cheese and topped with spicy aioli. Available near sections Field 22 and 23, and Top Deck 6.

Fans entering on the LF Club Level will now pass a new reception lobby area, as well as a new display case with rotating current team memorabilia. They will also find a new ticketed option in the Field Level Drinkrail seats. These stools provide a unique view and experience on the Field level.

Levy and the Los Angeles Dodgers introduced the new On Deck Circle on Field, Loge and Reserve levels. The On Deck Circle offers a constantly rotating menu of unique food and beverage designed around the food culture of both Los Angeles and visiting team’s city.

Bud & Burgers, fresh off its opening along the third base line on the Field Level, has also opened a concession stand at the RF Reserve Plaza. 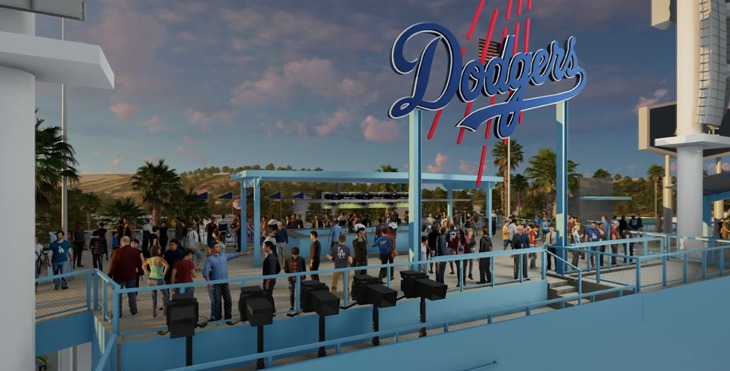 The reconfiguring of the ring road in centerfield has been enlarged in order to improve circulation and create a new premium lot “H” between the Historic 76 Station and the centerfield transit road.

New premium seating was installed outside of the Dugout Club and Baseline Clubs. USB power was also installed in each seat. These seats, located in original foul territory at Dodger Stadium, are now blue in colour to match the field wall from 1962.

In an effort to continually improve access to Dodger Stadium and improve ridership on the METRO bus lines service, the pedestrian loading area in centerfield has been reconfigured to provide a dedicated area with uniform pedestrian lighting.

As part of Dodger Stadium’s continued commitment to greening the surrounding park, additional landscaped islands of olive trees, palm trees and the native succulent plants of the region have been planted at either end of the transit street.

Levy and the Los Angeles Dodgers created an exciting new menu that truly celebrated the Pride of Baseball. New Executive Chef Ryan Evans plans to take the game day experience to a new level for all Dodger fans with new fan favorites and authentic local flavors.

The Dodgers welcomed the new Budweiser-branded concession stand located down the third base line. This Bud & Burgers stand serves the newest culinary creation inspired by fans: the Dodger Burger. With the world famous Dodger Dog grilled to perfection on top of a delicious patty, this is a can’t-miss item for the 2017 season! In addition, Budweiser has created a simulated batting experience by the left field Bud bar that encourages fans to swing for the fences at every home game.

Dodger fans can also enjoy the new King’s Hawaiian Grill, opened in the Left Field Plaza, where they can enjoy a special menu featuring a pulled pork Dodger Dog, pulled pork sliders, lava wings, smoked pork nachos and much more. The popular Think Blue BBQ has come to the Reserve Level in right field, adjacent to the kid’s area.

Dodger fans will see a number of new memorabilia displays including a gallery adjacent to the Vin Scully Press Box including Vin Scully’s headset and other objects from his broadcast booth during his final season with the Dodgers. The club level is also home to a new display case at the left field entry that features game worn jerseys from Dodger greats including Jackie Robinson, Sandy Koufax and others. Fans with tickets on field, loge and club and anyone with a season ticket can access these areas.

The right field baseline club, also known as the Ketel One Club, is home to a display featuring game used bats from nearly every All-Star that has worn the uniform of the Los Angeles Dodgers. This display is open to anyone in the right field concourse and faces the bullpen overlook in right field. You do not need a ticket to the baseline club to view this display.

Groups will find new areas to enjoy Dodger baseball. A new mini-suite has been constructed inside the Stadium Club on the right field club level to host groups of 15. The loge level party boxes, which can host groups of 12 to 16, have been given a new look and improved surroundings. Areas on the field level concourse near each foul pole have been created for groups of 15 to 60. The areas have standing room, bar stools and high top tables.

All of the suites on the club level have also been renovated, as has the Lexus Dugout Club dining area. Members of the Dugout Club will find new food items dotting the menu throughout the season.

For further information on the latest developments, as well as the recently completed renovations at Dodger Stadium, go to: https://www.mlb.com/dodgers/ballpark/stadium-upgrades