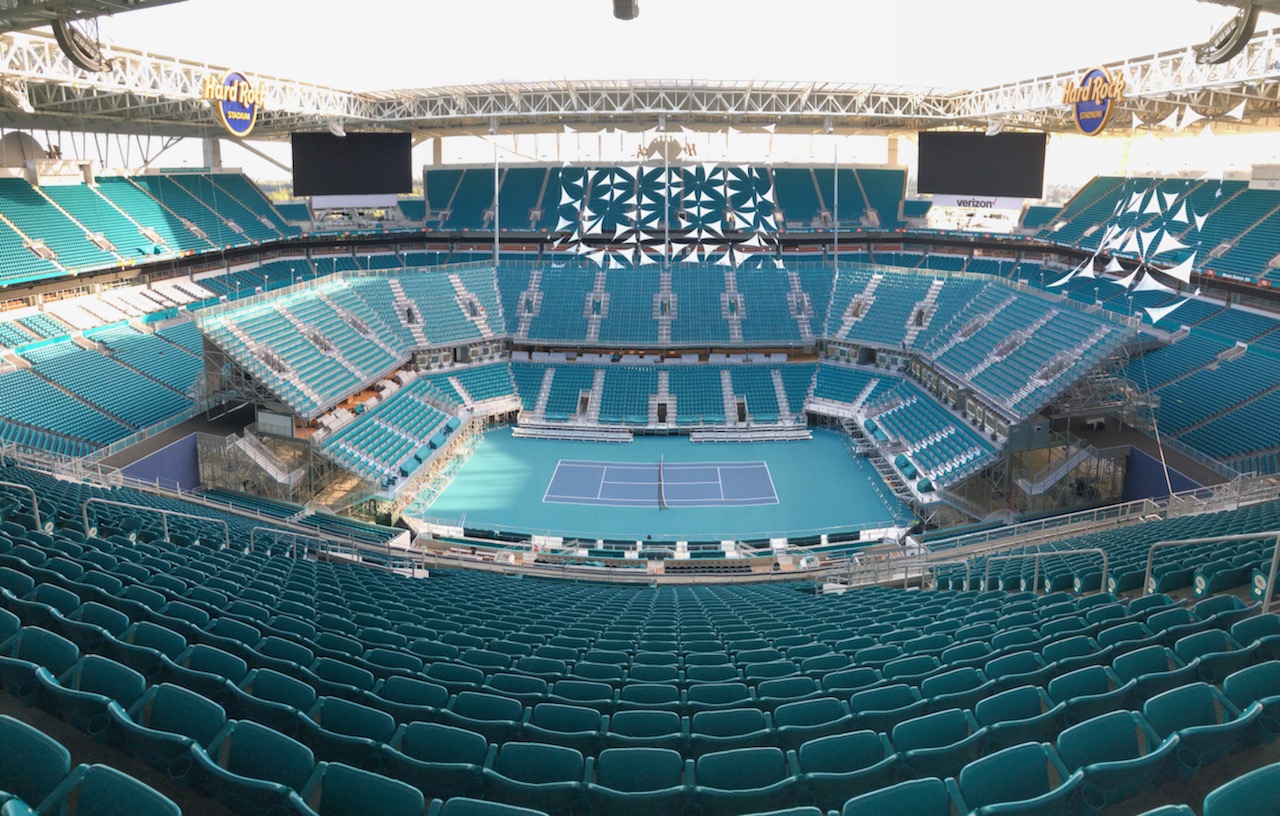 Long before the kick-off, the touchdowns, the half-time show or the full-time celebrations, an incredible amount of work goes into getting a venue ‘Super Bowl ready’. But for Miami, and Hard Rock Stadium, that work didn’t take days, weeks, or even months, it took years, as Tom Roche of The Parker Company’s Sports and Event Division explains.

The renovations of Hard Rock Stadium in 2017 paved the way for the venue to successfully bid for and host Super Bowl LIV, as well as winning the race to become the new host of the ATP Miami Open (as pictured above) and the likely future host of a new Formula 1® Miami Grand Prix.

Supporting that renovation work (as well as being part of the team to later convert Hard Rock into a temporary ATP tennis venue) were the procurement services of local firm The Parker Company. In fact, such is their sizeable presence in the world of sports and event procurement, they were also part of the team that delivered Mercedes-Benz Stadium in Atlanta, host to Super Bowl LIII last year, and are currently working towards completing ‘SoFi Stadium’ in Los Angeles, the chosen venue for Super Bowl LVI in 2022.

With an impressive CV that includes over 40 other sports and events projects to date, The Parker Company has grown from humble beginnings to become the industry leader in procurement agency services. Started in 1969 by Leonard Parker, the company initially served local hotel projects, and the hospitality industry is still its largest client, albeit with a global presence that now covers over 140 projects every year, on every continent, served by offices in Miami, London, Zurich and Dubai.

Parker is as busy today as it has ever been, in part because of the success of its Sports & Events Division. 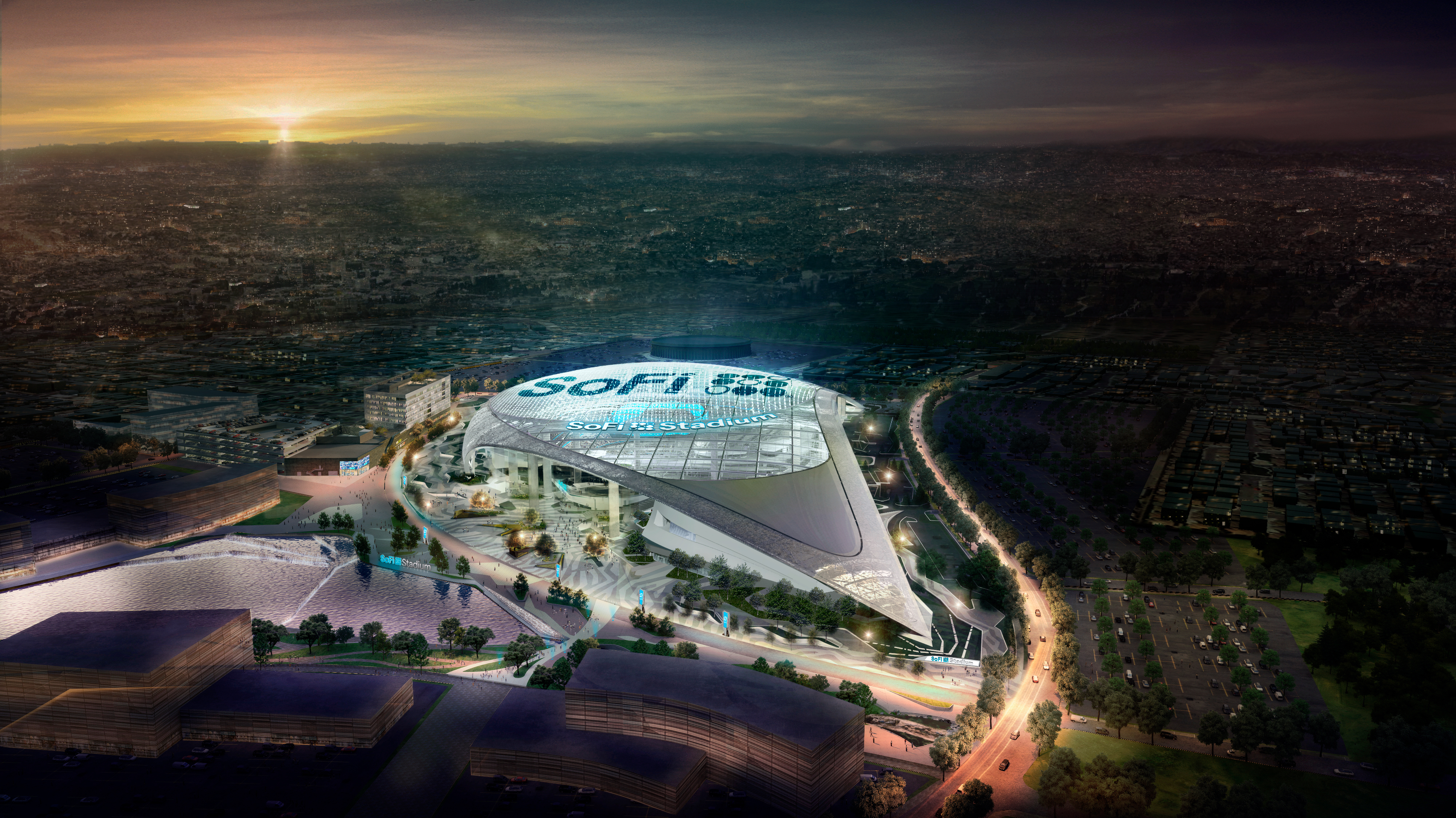 Launched in earnest in 2013, under the direction of industry veteran Don Lockerbie, the team are currently managing the multi-million budget, procurement and install at SoFi Stadium, the soon-to-be new home of the NFL’s Los Angeles Rams and Chargers, Allegiant Stadium, which be the new home of the Las Vegas Raiders, Lockhart Stadium, Inter Miami CF’s new stadium, Rocket Mortgage FieldHouse (formerly Quicken Loans Arena/The Q), home to the Cleveland Cavaliers, Cleveland Monsters and Cleveland State Vikings, as well as master planning the national sports infrastructure program for the Government of Saint Lucia.

Still family run and fully independent, the Parker model has become the benchmark for procurement services around the world. Using a bespoke software system to bid over £500m of annual project requirements to a local and global database of over 10,000 suppliers and manufacturers, Parker prides itself in working for the client to deliver every project on time and under budget. And with its roots deep in the hospitality industry, it now sits at the forefront of a design trend that is turning sports stadiums and arenas into five-star hotels and Michelin-starred restaurants.

Parker’s Don Lockerbie is currently busy putting the finishing touches to the new stadium for David Beckham’s MLS franchise, Inter Miami CF; a demanding project for a premier client, as he explains:

From the die-hard fan right up to the premium guest and sponsor, every visitor to a modern sports venue expects an increasingly sophisticated array of space, facilities and service. Our experience of delivering four and five-star hotels, resorts and arenas from Miami to Melbourne has given us the supplier base and knowledge to guide our clients through the very complex job of turning concrete and steel into atmospheric, functioning and profitable venues.

Don goes on to point out that 90% of the procurement that Parker manages for its clients is common across every market:

From tables and sofas to coffee machines and fridges, kitchens and televisions to artwork and security equipment, every hotel, office, stadium and arena we work on is demanding a level of fit-out that matches growing ambitions and user demand, no matter the sector.

In 2019, we sourced nearly 13,000 television sets and over 170,000 stadium seats, and so not only are we continually planning and buying common items across every project type, but the scale at which we are operating gives every one of our clients the benefit of our buying power, network and expertise. 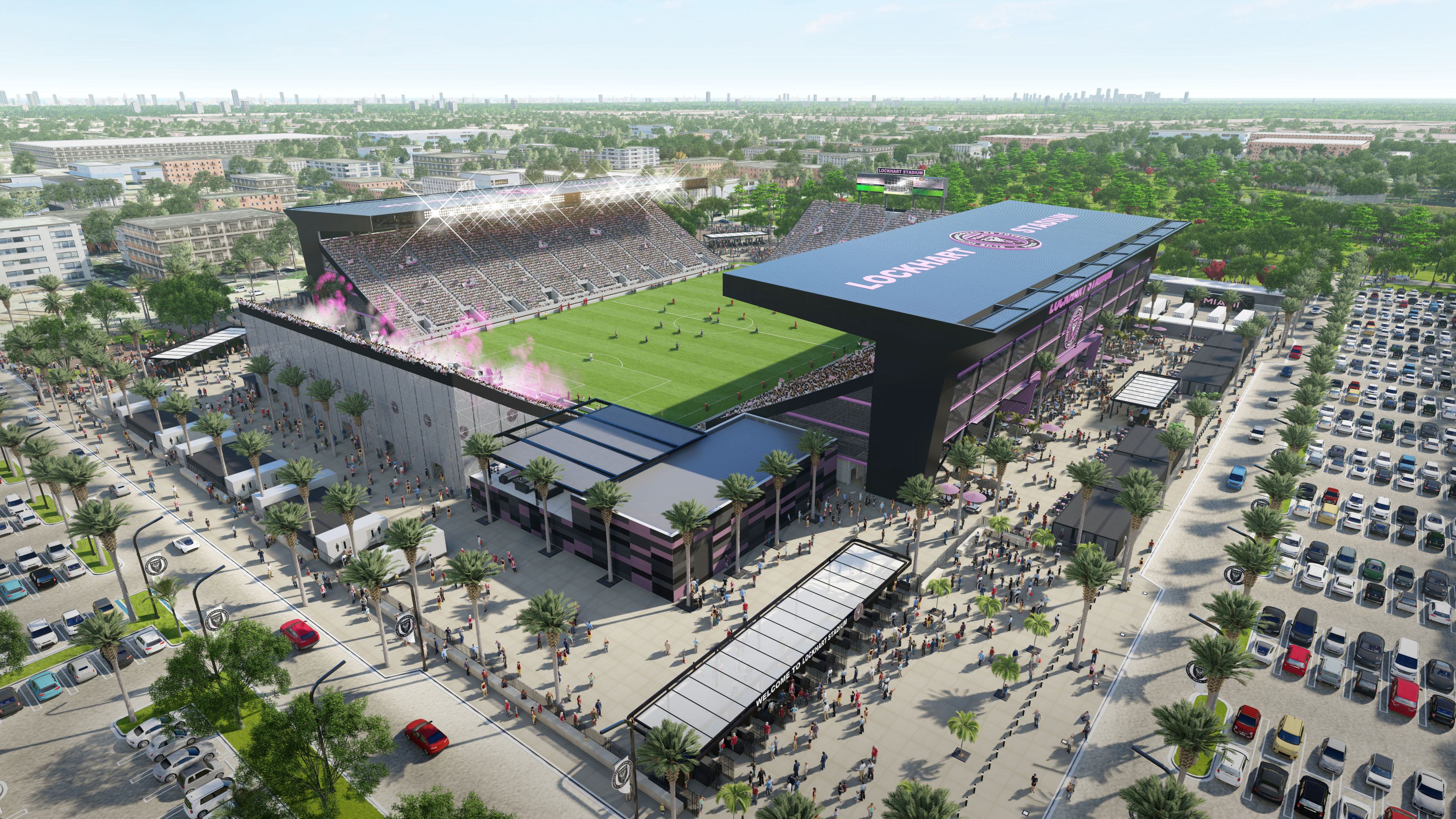 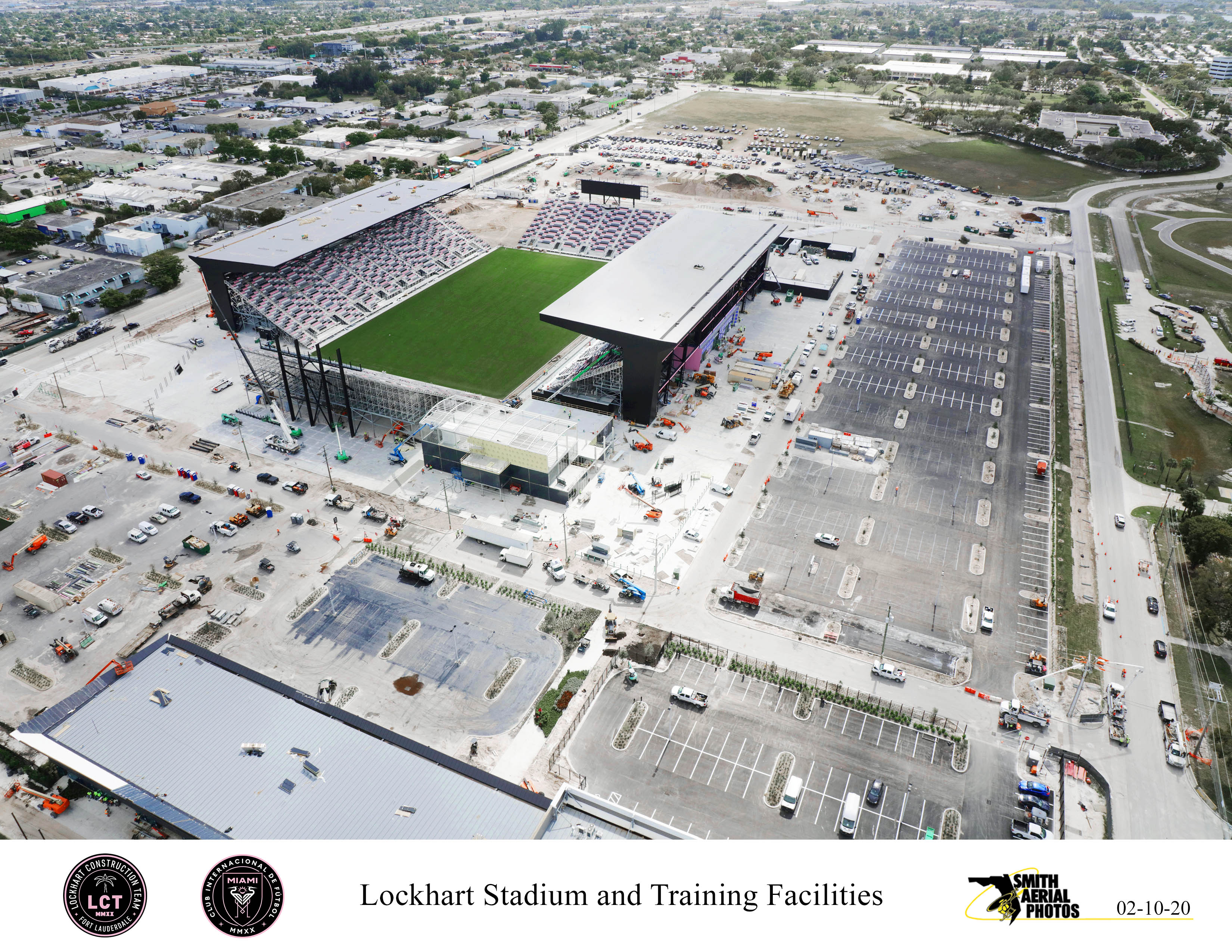 Doug Parker, CEO of The Parker Company, points to a simple formula as the key to their success:

We capture everything a project will need, whether it’s a new build or renovation, we bid it to a local and global network, and then we work with the client to make the right choices. It’s not so much about finding the cheapest options, it’s about helping our clients make the most informed decision. By cutting out a lot of unnecessary costs and buying from the right source, we are saving our clients time, reducing their risk, and cutting their budgets by millions.

With Parker’s Sports and Event Division recently launching across EMEA, this depth of expertise will soon be helping even more sports projects, of all shapes and sizes, as Tom Roche, who is heading up the London office and sees the growing trend in sophisticated stadium and arena projects continuing, explains:

Half of Europe now has an envious eye on Tottenham’s new stadium, and current and future projects will be looking to raise the bar even further. The FF&E and fit-out cost was 4% or 5% of a project budget only a few years ago, but it’s now often 10% or more. That is a sizeable piece of a project to get right, and that’s where we come in. When there are savings of 15% and more to be made, not to mention the reduction in time and effort, greater experience and better systems, there isn’t a project we can’t benefit.

Parker’s Don Lockerbie has one final observation to share:

Modern stadiums and arenas, even some of the training facilities we have worked on, are all architectural marvels in their own right. But step inside them and suddenly every chair, stadium seat, knife, fork and spoon become integral to the customer journey and to attracting and retaining visitors and supporters. FF&E used to be the last thing on peoples minds and was often the last line in a budget. Increasingly, we are one of the first companies onto a project and that demonstrates the importance clients and client teams are putting on getting these projects right from the very start. 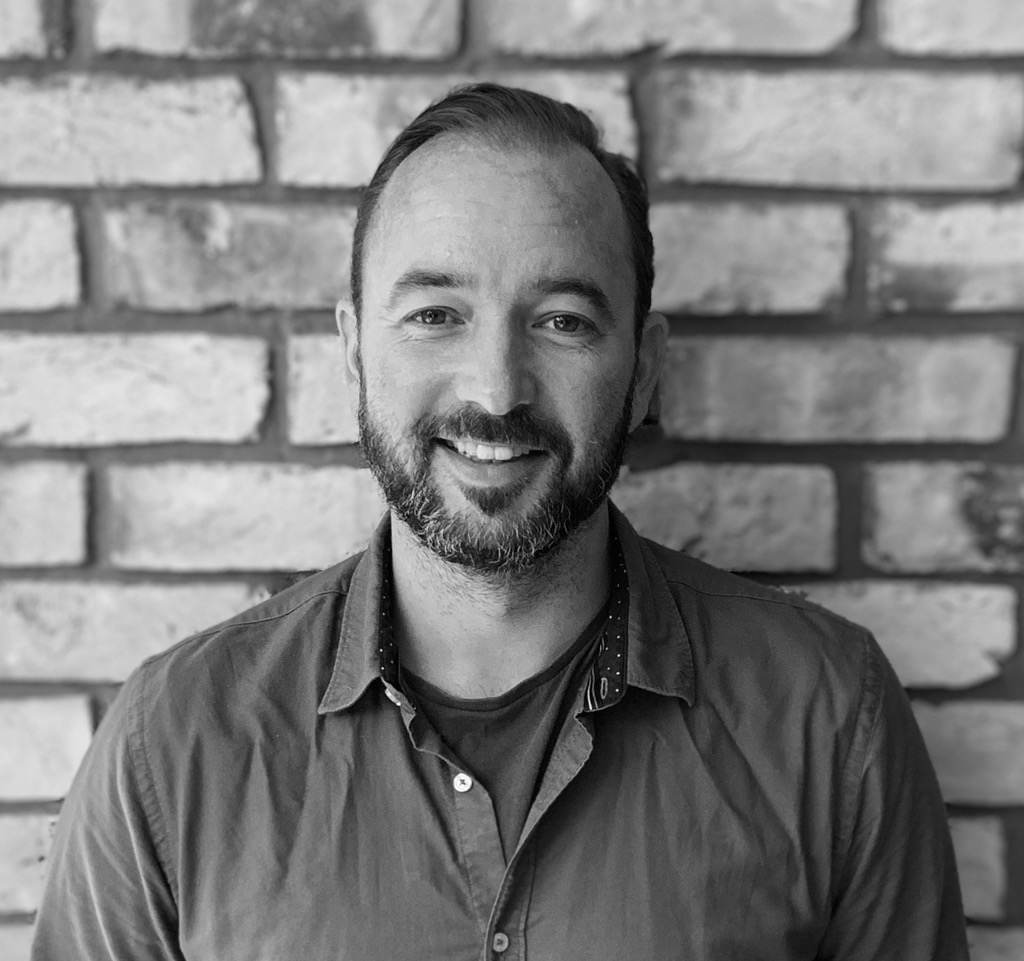 Tom Roche trained in Architecture before joining Skanska UK Construction as a Designer and Project/Planning Manager. In 2003, he took up his first role in sport, joining the Rugby World Cup in Australia as Ticketing Manager.

Tom has since held a number of positions across commercial sales and operations, event and venue planning, contract management and delivery, working on three Rugby World Cups (2003, 2007 and 2015), two Olympic and Paralympic Games (2012 and 2015), two ICC Cricket World Cups/T20 tournaments (2007 and 2010) and the 2008 Rugby League World Cup. He has lived and worked in Australia, France, the Caribbean and Azerbaijan.

In 2018, Tom joined The Parker Company, the worlds largest sports, event and hospitality procurement agent. With over £500m of annual buying power across 100+ projects per year, Parker use global reach and 50 years of expertise to help their clients reduce the cost, time and risk associated with project procurement.

ALSD International, Europe’s leading event for the Premium Seat & Hospitality sector, will take place at Liverpool FC’s iconic Anfield Stadium this October 12-13. It will include a conference examining how to increase revenue through new builds, renovations and service expansions, and how to recoup lost revenue due to COVID-19, as well as featuring an exhibition hall showcasing the latest products, services and solutions, behind-the-scenes tours of Anfield, Everton’s Goodison Park and M&S Bank Arena, plus numerous networking events.