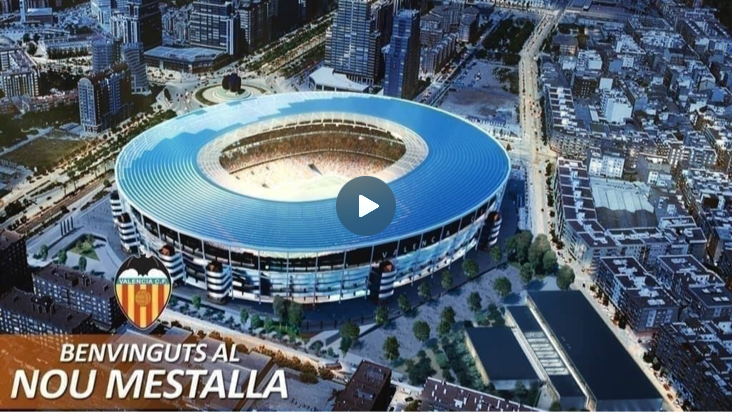 Spanish LaLiga side Valencia CF has this week presented the project for the club’s new stadium, in a ceremony held at the facilities on Avenida de las Cortes Valencianas in the city.

The club’s Director-General, Sean Bai, Director of Operations, Christian Schneider, Financial Director, Inmaculada Ibáñez, and the architect responsible for the project, Mark Fenwick, detailed the key features of a ground that will replace Mestalla.

The new Valencia CF stadium will be groundbreaking in terms of sustainability, thanks to its photovoltaic solar panelled roof, will have balconies inspired by Mestalla and boast an eventual capacity of 70,000 spectators.

In addition, the Nou Mestalla will offer a significant improvement in the fan experience, with optimal views and comfort, as well as a large restaurant and an entertainment area located in the second ring.

This is a very important day. I’m going to explain the new stadium project. The ‘bowl’ is finished. The stands are designed to have the best level of visibility and permit a capacity of 70,000 spectators. The stands, when full of fans, will provide a lot of pressure for opposition teams on the pitch. We have separated the seats to give users a little more comfort. 70,000 is a capacity befitting a Champions League final and meets UEFA and FIFA criteria. The stadium could host a [FIFA] World Cup final.

What we have improved with respect to the initial project is the different options for fans. We have balconies stands with recreational offers. Three years ago, we were in the United States to look at different models of spectators. There are many stadiums with this capacity such as that of Juventus, the AVIVA in Dublin, Schalke’s ground… It is a magnificent size.

One of the main mistakes designers make is to build a stadium with too big a capacity. There is nothing worse than a half empty stadium. The solution is to start with 49,000 spectators, but with the ability to expand to 70,000. The initial idea is that of grouping fans together, and that is better for the team.

The roof has been designed by our engineers. It is supported on the outside of the stadium. It is light, with a compression ring. On this, we are going to create a solar cover. This roof is a ‘sound mirror,’ so that it bounces back all over the field. It is also a sustainable roof. The idea is that it will be the largest solar panelled roof in Europe. We have also worked to create a bat visible above the Grada Oeste stand. It will be seen from the outside, but also from the inside.

Stadiums are the new cathedrals, and this is a stadium that even produces energy. It is a new icon for the city and it is a stadium that is going to be a benchmark in Europe. One of the things we like about stadiums is to give the idea of being able to walk around the stands and seeing the pitch before getting to your seat. You can see the pitch and the city from the same place.

The 2022 edition of ALSD International is being hosted at Tottenham Hotspur Stadium this September 19-20, with the main focus of optimising revenue through New Builds, Renovations & Service Expansions, with Architecture & Design, Fan Experience, Hospitality & Interiors, Premium Seating, Rebuilding & Recovery, Sales & Service, Sustainability and Technology some of the key pillars. Franco Segarra, Innovation Director at Valencia CF, is one of the 38 high-level executives sitting on the ALSD International Advisory Board.

The license that was obtained initially allowed for 74,000 spectators. Adjusting to 70,000 is to improve capacity. We do not want this stadium to be unused, but rather to be used every day of the week, and it will remain open to the public. In the middle ring, courts will be created with restaurants and leisure facilities.
We have requested the license for 70,000, but we have initially opted for 49,000. The change is the third tier. There are two reasons for us to begin with a 49,000 capacity: The first reason is that the current average attendance would make the stadium half empty, and that would hinder us at a sporting level. It could be gradually expanded. If we host the 2030 World Cup we could expand.

The roof is made of plates that can be replaced by photovoltaic panels. The pandemic has taught us a lot about open and closed venues. We have opted for a more open and ventilated façade. It will have balconies where hopefully we can celebrate a trophy win. From the outside you can see the curvilinear shape of the façade.