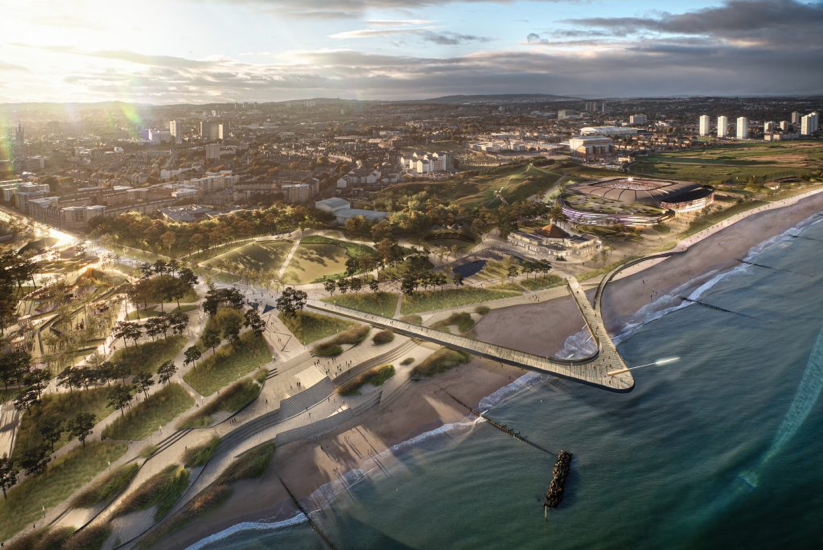 Following a recent survey, an overwhelming majority of Aberdeen Football Club fans have come out in support of a new stadium as part of ambitious plans to revitalise the beachfront.

Aberdeen City Council’s refreshed City Centre Masterplan now extends to the regeneration of the beachfront with aims to improve connections between the city centre and the boulevard. A new home for Aberdeen FC is being proposed as a focal point for the redevelopment of facilities to deliver a world-class community sports complex, revitalising the whole beach area.

Over 6,500 fans responded to a recent survey by Aberdeen FC, with 92% of them in support of the beach location for a new stadium to replace Pittodrie.

The main reasons given for the support were keeping the stadium in the city, close to its original home and heritage and where it can benefit city centre businesses. Of those fans who provided reasons why they preferred the beach location, the majority said a football ground should be in the city it serves and at the heart of its community.

Indeed, being at the heart of the community came out top when fans were asked to consider their priorities for the stadium’s location, design, and build. This was followed by atmosphere and affordability as top priorities with proximity to public transport, iconic design and environmental sustainability being factors but with less importance to supporters.

With momentum building for the new stadium at the beach and an outline business case due to go before Aberdeen City Council in June, the Club wanted to gauge the support for the proposed location.

The response to our survey has been fantastic and it’s clear that the vast majority of fans would prefer us to remain near our spiritual home and within the city.

Inevitably, the long and arduous process of finding a new home for the Club has again raised questions over why we can’t stay at Pittodrie and why we are now considering the beach after spending considerable time and money on Kingsford.

Mr Wicks explained that realising the value of the land at Pittodrie is critical to funding a new stadium and that the redevelopment of the current site would cost the Club financially, not to mention the challenge of finding a ground while any redevelopment was taking place:

At a new site that isn’t land-locked or otherwise constrained, we can create new, quality, modern and flexible spaces and facilities that will allow us to not only drive current revenues and generate new revenue streams, but also enable considerably more community-led activity.

As the only option open to us at the time, Kingsford presented a number of positives, including the benefits of having our training facilities co-located with the stadium and the ease of access for fans from outwith the city. It was our plan C when there was no plan D.

However, Mr Wicks further explained that the Council had approached the Club in 2020 with the beach proposals as part of plans for the regeneration of the whole beachfront:

Recognising the urgent need to retain footfall in a city centre devastated by the withdrawal of major retail brands, the Council asked us to explore the potential of remaining in the city. Since, then we’ve been working with them, our stadium architects and other specialist consultants on potential designs and an outline business case for a new stadium and community sports complex, incorporating an ice rink and leisure centre.

Aberdeen FC believes that, with stunning views out to sea, the new stadium at the beach would not only generate increased revenues and be a beacon of sporting excellence but could also become a tangible demonstration of the city’s net-zero ambitions by being highly sustainable, not only powered by clean, green energy, such as hydrogen, but capable of generating green energy to be used by the wider community.

The outline business case will go before the Council in June.

Aberdeen compete in the Scottish Premiership and are one of the biggest sides in the country, having won four league titles, six Scottish League Cups and seven Scottish Cups, including a record three in a row during the 1980’s. It is the only Scottish team to have won two European trophies, The European Cup Winners Cup and European Super Cup in 1983.

AFC are known as The Dons, The Dandies, The Reds or The Dandy Dons and play at Pittodrie Stadium.

Since its foundation, The Dons have developed a reputation, both nationally and internationally, as one of the UK’s best known clubs. The Club has and will continue to nurture talent and embrace opportunity and change in an innovative manner.

On the field, the Club has a long history of success, both within Scotland and Europe, with the 1980’s particularly being an era of unparalleled achievements. Off the field, AFC has consistently recognised the need to be at the forefront, as demonstrated by the fact that Pittodrie was the first all-seated stadium in Britain.