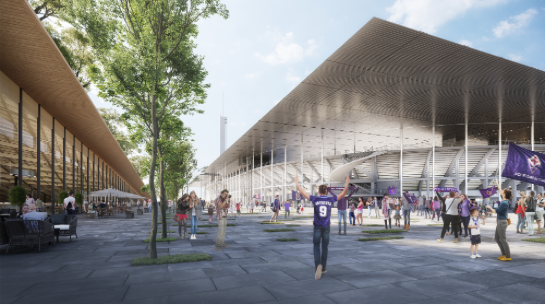 Responsible for the architectural and multi-disciplinary design of the stadium, home to ACF Fiorentina, Arup worked in partnership with Mario Cucinella Architects for the design of the Campo di Marte Masterplan and Cupelloni Architettura as building heritage consultant.

Following a six-month process and 31 design submissions, the announcement was made during an award ceremony held on March 7th in the presence of the Mayor of the city of Florence, Dario Nardella.

Arup’s vision for the stadium preserves the historic existing structure and integrates it with a new, elegant architectural design. In this unique design, the original stadium and the contemporary elements coexist organically, specialising in different and complementary functions that transforms the spectator experience.

The redevelopment is represented by a new roof that creates a bold new appearance in relation to the urban context and landscape: a thin rectangular metal blade that rises above the historic stands.

The shape and profile are designed to minimise the visual impact on the Florence skyline and celebrate the elegance and horizontality of Pier Luigi Nervi’s original design – suspending and opening up close to the original iconic elements such as the Torre di Maratona and the roof of the Tribuna d’Onore.

The spaces between the new stands and the curves of the current stadium represent the meeting point between the new and the existing, between the city and the stadium, points of interconnection and exchange between the public, spectator and citizens alike.

With many stadiums across Europe facing the need to adapt and modernise, the design showcases what is possible through renovation and preservation as opposed to demolishing and building new.

The masterplan has been developed with sustainability at the core, with the goal ofachieving net zero carbon through the implementation of energy and water management strategies aimed at enhancing the symbiotic relationship between the stadium, the park and the other masterplan buildings. The result is an innovative district energy system that promotes the recovery and sharing of energy between the various urban users.

The new stadium roof will allow the production of renewable energy through photovoltaic panels to serve both the stadium and the rest of the development and the masterplan buildings. The new roof will also allow the collection of large quantities of rainwater, which, stored in underground tanks, can be reused for irrigation and other non-drinking uses within the compound.

The masterplan provides spaces designed offer new perspectives on the city and the surrounding landscape, integrating lightly into the city skyline. The project will delivera new green space for the city of Florence thanks to its layout and the inclusion of new attractive functions, the area is conceived as an urban space active not only during football matches but all year round, attractive both to the residents of the neighbouring districts and to the many tourists visiting the historic city.

The project proposal also aims to enhance the bicycle and pedestrian mobility system in continuity with the existing network that crosses the historical centre of Florence.