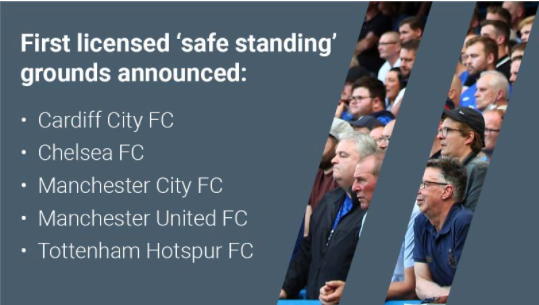 The five clubs will be the first in the top two tiers of football in England and Wales to allow standing in nearly 30 years. They will pioneer a new approach, which offers fans the opportunity to stand in certain areas.

The change builds on the success of the Government’s all-seater policy, brought in following the Lord Taylor report into the Hillsborough disaster. For many years, fans have campaigned for standing to be reintroduced. Independent research conducted recently has identified the safety risks related to persistent standing in seated areas. It has also evidenced the positive impact engineering solutions, such as seats incorporating barriers or independent barriers, can have.

Today’s historic announcement is a vital step towards fulfilling the Government’s manifesto commitment to introducing licensed safe standing areas at all-seater football grounds. The grounds have been selected following an application process, open to all grounds covered by the all-seater policy, led by the Sports Grounds Safety Authority (SGSA).

I’m pleased to approve these five clubs as early adopters of licensed safe standing areas for the second half of the season. The time is now right to properly trial safe standing in the Premier League and EFL Championship ahead of a decision on a widespread roll-out. Safety is absolutely paramount and the SGSA is working hand-in-glove with the clubs on this. Fans deserve different options on how they can enjoy a live match and I will be watching the progress of these trials with interest.

We are delighted that Manchester City’s application to become an early adopter of licensed standing has been approved. Our fans have consistently voiced their support for the introduction of safe standing, and we are pleased that we will be able to fully utilise our rail seating installation from January through to the end of the season. As always, safety is our main priority, and we look forward to working closely with the Sports Grounds Safety Authority over the course of the trial to demonstrate the long-term viability of safe standing at the Etihad Stadium.

The Club has led on lobbying the Government for safe standing at stadia and is delighted that this will now be possible. It delivers choice for fans attending the game – whether home or away supporters – and the vast majority of our fans are in favour of this scheme. We are extremely proud of our ‘safe seating’ design, which ensures both comfort and safety, whether standing or seated, while maintaining the same aesthetics as in all other areas of the stadium.

The focus of the SGSA is the safety of all fans at sports grounds. We know there is a safety risk arising from fans who persistently stand in seated areas, demonstrated in independent research. We also know many fans want the choice to stand. The advent of new engineering solutions and the findings from our research has shown this can be managed safely. Today’s announcement will enable us to properly test and evaluate licensed standing areas and advise the Government in its next steps. We are taking a careful, evidence-based approach to this historic change, again using independent researchers to evaluate any lessons to be learnt.

All grounds subject to the Government’s all-seater policy were invited to apply to become early adopters. Clubs had to meet a number of criteria in order to receive approval to have licensed standing areas, including:

Importantly, it is not a reintroduction of terraces in top flight grounds and other areas of the ground, without barriers, will remain subject to the Government’s all-seater policy.

The introduction of licensed standing areas follows research conducted during the 2019/20 season, prior to the onset of the pandemic, which found that seats with barriers/independent barriers helped reduce the safety risks related to standing in seated areas.

ALSD International delivers an annual conference & exhibition, as well as a 365 community, with a focus on increasing revenue through New Builds, Renovations & Service Expansions, via innovations in niches including Premium Seating & Hospitality, Architecture & Design, Fan Experience, Rebuilding & Recovery, and Technology.

The 2021 hybrid edition was hosted by Liverpool Football Club and featured a high-level conference, an exhibition hall that showcased industry-leading products, services & solutions, as well as networking events at Everton’s Goodison Park and M&S Bank Arena. The 2022 event will be announced in the coming weeks!