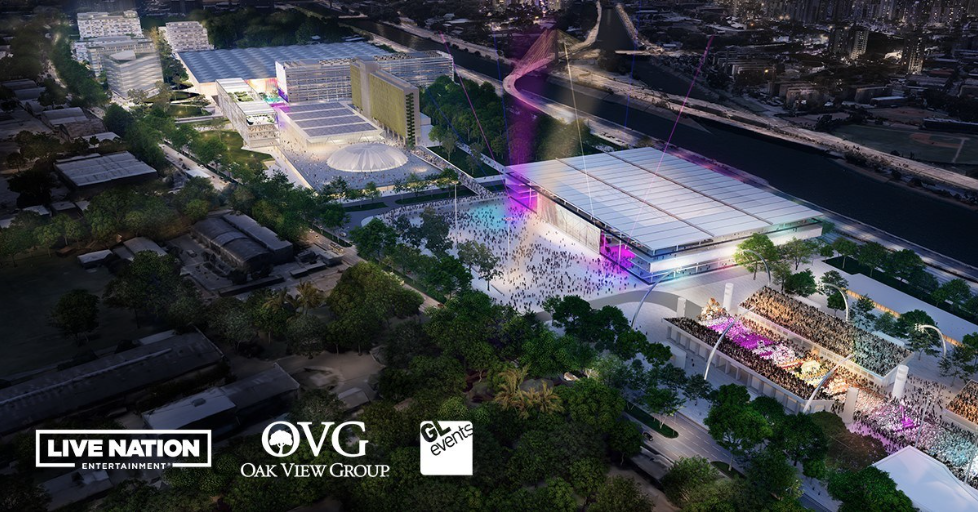 São Paulo Mayor Ricardo Nunes has announced that the city will be welcoming a new 20,000 capacity arena, developed through the partnership of Live Nation Entertainment, Oak View Group (OVG) and GL events, who was awarded a 30-year lease by the City of São Paulo for the Anhembi campus.

The state-of-the-art ARENA SÃO PAULO will host live events including concerts, sports games, family entertainment and more, and will be located within São Paulo’s premier entertainment destination, the ANHEMBI DISTRICT (a 4 million square foot campus), which is already well-known for hosting the Carnival parade, among other events.

As part of the development agreement, Anhembi will emerge as São Paulo’s newest district, revitalising the fabric of the surrounding community.

The ARENA SÃO PAULO announcement marks the beginning of the redevelopment of the whole ANHEMBI DISTRICT, which will include a large program of real estate investments. Anhembi will be transformed into a global benchmark for events, featuring the indoor arena, a cultural boulevard, an exhibition centre and São Paulo’s first next-generation international convention centre.

The agreement marks the most significant step towards the modernisation of the complex in its 50-year history. As a result of the redevelopment, the complex will generate cash flows of approximately 5 billion of Brazilian Reais of economic benefit for the city and local businesses and become one of the main engines to increase the São Paulo economy.

At the same time, this development creates a historic opportunity for São Paulo, the 4th largest city in the world and the wealthiest economy in Latin America, to continue maximising its prominence as one of the world’s top destinations for concerts, sports, e-sports, family events, exhibitions and conventions.

Today is a historic day for our city because we are starting the implementation of the Arena São Paulo, a project leaded by the three best companies in the world in their industry. We are going to build the best arena in Latin America. It will be a major achievement for the city of São Paulo and for the world.

In addition to developing the venue, Live Nation, the world’s leading live entertainment company, and Oak View Group, the global venue development, advisory and investment company for the sports and live entertainment industries, will be the operators of the facility and will oversee event bookings.

Live Nation is focused on featuring both international and domestic artists at the city’s future premier large entertainment venue, ARENA SÃO PAULO. Live Nation has an important presence in Brazil, hosting major festivals such as Lollapalooza and Rock in Rio, while also promoting local and international tours.

As the leader in live, we’re excited to be expanding our footprint in Latin America by creating a world-class arena in São Paulo. This new venue will add to our portfolio of 200+ venues worldwide and we are proud to contribute to the growth of São Paulo as a live music hub and international touring destination.

Olivier Ginon, Founder and Chairman of GL events; a world-class provider of integrated solutions and services for events, said:

GL events is a leading global player and Brazil’s largest operator in the events sector. We are excited to partner with OVG and Live Nation Entertainment, two global entertainment leaders to invest in ARENA SÃO PAULO. Entertainment is a major component of ANHEMBI DISTRICT. We look forward to capturing synergies between ARENA SÃO PAULO and our network of venues, including Rio de Janeiro’s Jeunesse Arena.