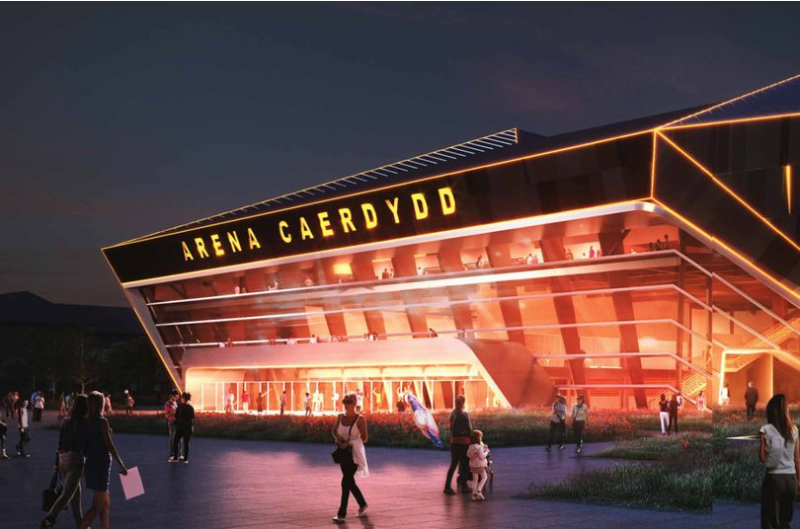 One of the world’s leading entertainment firms, Live Nation, has been named as the operator for a new £150m indoor arena for Cardiff. In a further project announcement, Robertson was named as the preferred bidder to deliver the venue.

According to BusinessLive, the US-owned firm, working with its fellow US development partner Oak View Group (OVG) will deliver a 12,500-seat (expected to accommodate 15,000 with standing) arena for Cardiff Council on the site of the authority’s existing car park at its County Hall HQ in Atlantic Wharf.

Subject to planning consent, work on the arena, is expected to start November 2021, with an opening date expected to be around February 2024.

Live Nation came through a competitive tendering process, from which around eight bids were received, before being whittled down to a short list of just two which saw it up against fellow US arena operator AEG.

The project, championed by Cardiff Council cabinet member for investment and development, Russell Goodway, is seen as the missing link in the city’s entertainment and leisure infrastructure. Mr Goodway confirmed preferred bidder status for Live Nation at a council meeting, following a cabinet meeting earlier.

A financial and legal agreement between Live Nation and the council will be finalised over the coming months.

Currently, the city’s concert and event offer goes from 70,000-plus spectators at the Principality Stadium to 7,500 at the Motorpoint Arena. The city will now be able to attract events in the lucrative 7,500-plus to nearly 20,000 spectator marketplace.

Live Nation already operates the Motorpoint Arena in the city centre. It is unclear at this stage what Live Nation’s plans for its current arena are.

The Motorpoint Arena’s current economic benefit to the city is put at around £30m, with the new arena expected to provide a four times greater impact at more than £100m per annum; similar to the contribution of Manchester’s indoor arena.

It is also expected to attract around one million spectators a year — helping to significantly increase the number of overnight visitors to the city and their average spend.

The council has ringfenced a £20m capital contribution towards the Live Nation-led project, which will also see it demolishing the existing Travelodge hotel, and construction of a new one, to help make way for the arena.

Live Nation will raise the capital to finance its project, via a pension fund, at a rate lower than the low interest the council could borrow at from the Treasury’s Public Works Loan Board. It is understood that Live Nation will enter into a long term RPI inflation linked lease.

The arena has an expected pricetag of £150m. Live Nation’s project will also see £20m for the Travelodge element with £10m of contingency depending on the cost of borrowing capital to finance the overall scheme. If money raised against the rental income of the arena is negotiated on more favourable terms, which will be looked at over the next few months, this could reduce the council’s contribution by up to £10m.

The council will provide an ultimate guarantee on the rental income on the arena, but that is only after a guarantee from the parent company of Live Nation, which last year generated global revenue of more than $11bn.

Live Nation and its development partner OVG see the European market as ripe for expansion, and will be looking for the Cardiff arena to be profitable and over the long-term. OVG is currently delivering seven new arenas in the US, as well as new indoor arenas for Manchester and Milan.

In the first year, the new Cardiff arena will host around 130 live events and over a number of years will rise to 140.

Also in the Live Nation-led consortium is construction firm Robertson, which has been named preferred bidder to build the new arena. Robertson completed the construction of the £333m Aberdeen Exhibition & Convention Centre (AECC) last year.