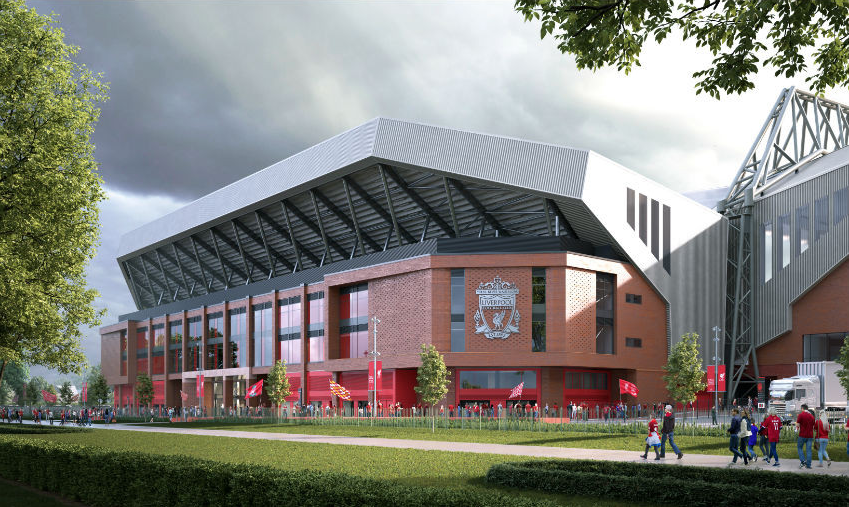 Liverpool Football Club will this week submit a planning application to Liverpool City Council for the proposed expansion of the Anfield Road stand.

The submission of the planning application was paused in spring this year due to the uncertainty surrounding the COVID-19 pandemic. The plans would see the capacity of the Anfield Road stand increase by around 7,000 seats, taking the stadium’s overall capacity to more than 61,000.

As part of the application, the club is also seeking permanent permission to hold concerts and major events at the stadium.

The plans for the Anfield Road stand have been the subject of two stages of public consultation with local residents, businesses, fans and stakeholders.

The first stage, launched 12 months ago, included the permanent closure of a small section of Anfield Road, in line with the original planning permission granted in 2014. After listening to feedback on this option, the club made changes to the plans.

A second stage of consultation was held in February 2020, during which the club presented new and updated plans. This included plans to keep Anfield Road open, with the road realigned around the footprint of the proposed expanded stand.

More than 700 responses were received to the consultation and the revised plans were well received, with the vast majority of respondents expressing support.

We have been clear from the start that the expansion would be based on three things: financial viability and sustainability, the successful navigation of the complex planning landscape and with the cooperation of local residents and the community.

We’d like to thank everyone who has offered a contribution to that consultation process. We feel that we now have a proposal that has been informed by our neighbours, will support the wider economy and provide an opportunity for more of our fans to come to Anfield to support our great team.

The last nine months without fans in our stadium has driven home our commitment to making Anfield accessible to more fans than ever before and while a high level of uncertainty remains around COVID-19, we would like to be in a position to move ahead with the proposed redevelopment as soon as the time is right, which is why we’ve decided to move forward with submitting the planning application.

The planning application will shortly be submitted to Liverpool City Council and is expected to be decided in spring 2021.

Liverpool FC will be hosting the next edition of ALSD International in the recently redeveloped Main Stand, designed by KSS, who will once again be an exhibiting sponsor and sharing insights at the event, as will LFC CEO, Billy Hogan

The Liverpool City Region has been placed in Tier 2 restrictions, so Anfield could be permitted to operate with a maximum of 2,000 supporters, in the interest of public health and safety.

The club has been working closely with its city partners, Liverpool City Council, Merseyside Police and Spirit of Shankly to create a robust plan, which is in line with government guidance and prioritises the safety of the local community, supporters, staff, players and emergency services. Those plans will need to be ratified by the council’s Ground Safety Advisory Group this week.

All city partners are encouraging those supporters who do attend this game to take a test either the day before or day of the game. Anfield’s Kop Bar will continue to be one of the city’s mass testing centres and will be open on matchdays.

A minimum of 75% of the 2,000 tickets available for the Wolves fixture will be used for general admission, which is aligned to the ratio used when the stadium is at full capacity. The remaining tickets will be allocated to hospitality supporters, players and to meet contractual obligations.

Only Anfield’s recently redeveloped Main Stand – which will be the host venue for the upcoming hybrid edition of ALSD International – will be in use for the Wolves fixture.

The club will also be rolling out NFC technology to manage access and understand who is in the stadium. The use of NFC technology will allow fans to gain access to the stadium using an electronic ticket on their smartphone to minimise physical contact.

KSS is a VIP Sponsor of Sports Venue Business (SVB). Click on their banner advert below to find out more about the specialists in the design of major sports venues and training facilities, including LFC’s recently opened AXA Training Centre…

The event will feature a high-level conference, exhibition and networking events, as well as tours of Anfield, Goodison Park and M&S Bank Arena. NB: The microsite is now ‘live’, providing registered attendees with the opportunity to start networking.