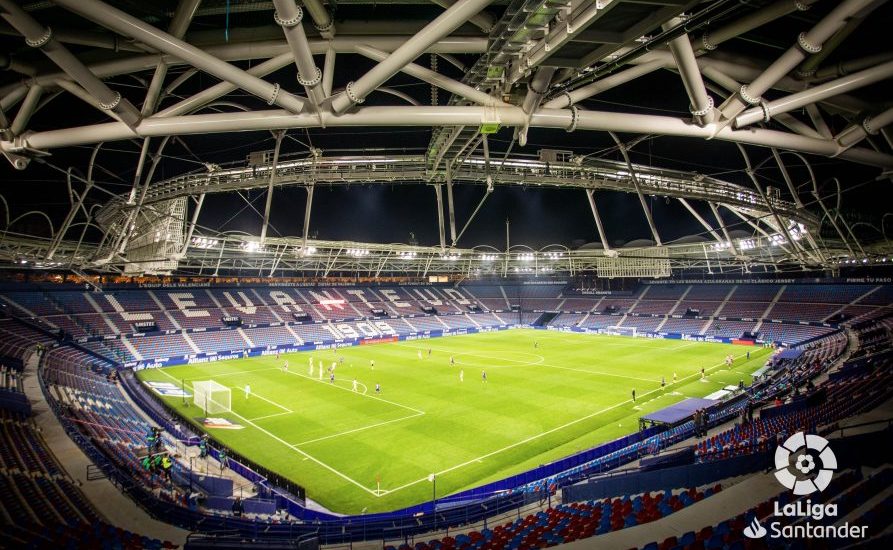 Installation of a new roof, new lighting and new video scoreboards have turned Estadi Ciutat into one of the leading stadiums in LaLiga and Europe. As part of this redevelopment project, new commercial opportunities will be available to the Valencia-based club.

After 8 months, football has returned to the Estadi Ciutat de València stadium. The current redevelopment works, centred around the installation of a state-of-the-art roof, are giving Levante UD’s home a modern and pioneering look, while demonstrating the continued growth of LaLiga clubs.

As the latest stadium project to take place in Spain in recent years, LaLiga clubs continue to show a willingness to invest in the creation of top-quality stadiums that provide the best spectacle for fans, players and TV audiences alike.

Designing for a city-centre location

Located in the Orriols neighbourhood of Valencia, the Estadi Ciutat de València was inaugurated on September 9th of 1969. Now, 51 years later, the growth of the club is reflected in a major redevelopment project that reaches the latest European football and broadcast standards.

The work has involved a comprehensive refurbishment of the existing stadium and required sophisticated design work, as space was limited due to its city centre location.

The new roof, for example, has been designed with the latest technology to be as light as possible, while covering the minimum amount of space so as not to affect the stands below.

There are two phases to the redevelopment plans at the stadium, which began in the summer of 2019.

Phase One consists of the building of the roof around the ground and the installation of new lighting, which will allow for 4K broadcasts. There will also be new signage, two new 21×7 metre TV scoreboards, a new sound system and new security systems. Work here is due to be completed this month.

In Phase Two, the club will reorganise all interior spaces to improve and modernise them, while creating new VIP zones and commercial spaces.

Greater comfort for fans and adaptation to broadcast guidelines

These reforms will allow the club to modernise the facilities in ways that will meet all UEFA and FIFA quality standards, allowing the club to host European matches.

A further benefit of the work is that the club can now more easily meet the requirements of LaLiga’s broadcast guidelines.

As well as modernising the stadium’s image and providing greater comfort to fans, this will also help the stadium meet the television broadcast rules by improving our lighting and by allowing for the installation of an aerial camera.

When fans are able to return to stadiums, those who visit to the Estadi Ciutat de València will be able to enjoy a unique experience and a completely different atmosphere to what existed before.

The introduction of new technology will make an immediate difference., as Gil explained:

There will be better mobile connectivity and this can allow for better interaction with the fans in the stadium and the offering of products and services through the Granota fan club app.

The new acoustics enabled by the re-designed roof will also create a much more vibrant buzz during matches and, in addition, fans will be better sheltered from the sun and from the rain.

The new video scoreboards and sound system will also offer a better-quality experience.

A reference for medium-sized stadiums

While works are being completed, football is already able to take place. Levante’s home match against Deportivo Alavés last week was the first it has held at its stadium since 8th March 2020, a period of eight months.

For this match, we installed new hybrid turf, new lighting that meets the broadcast guidelines and the entire roof structure. Step by step, the roof will be closed up and the new video scoreboards and aerial camera will become operational.

Going forward, the club will add to the sporting and fan experience with new commercial opportunities, as he outlined:

Merchandising sales can be opened up at the stadium with many possibilities and with the objective of creating new revenue streams.

The fundamental objective of the plan we’re carrying out is to make our stadium a more modern one and a reference for medium-sized stadiums, thanks to the functional design that is focused on the fan experience and thanks to the way it is managed on non-matchdays.

A panel of high-ranking experts from LaLiga will be sharing insights during the next edition of ALSD International.

The event will be complemented by tours of Anfield, Goodison Park and M&S Bank Arena, as well as an innovative app and microsite – powered by Ungerboeck – providing attendees with unrivalled opportunities to network pre, during and post event.