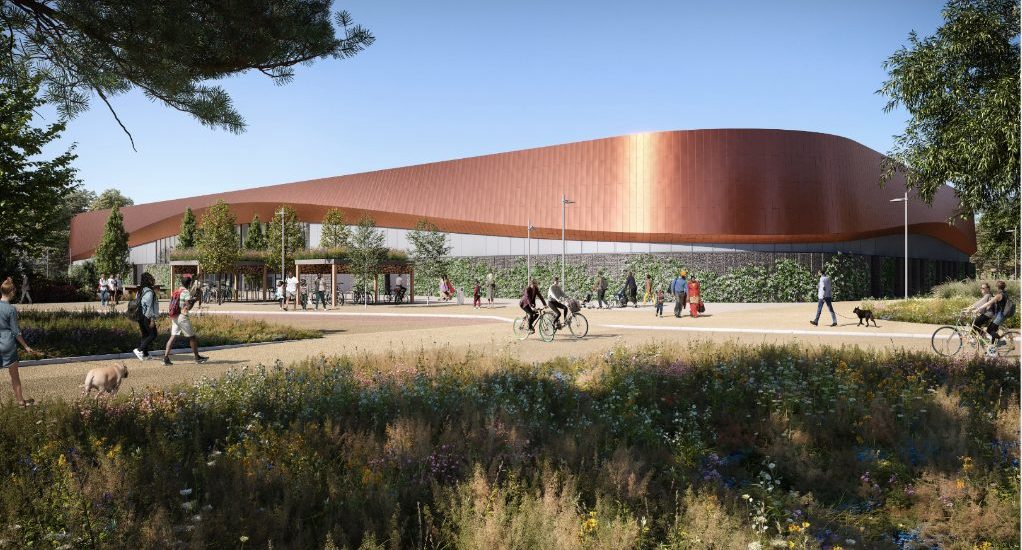 Designed by FaulknerBrowns Architects on behalf of Lee Valley Regional Park Authority (LVRPA), the new £30m venue will replace the existing single-pad Lee Valley Ice Centre which, after 36 years of use, is nearing the end of its operational life and struggling to meet demand.

The facility will include two Olympic-size ice rinks with capacity for 800 spectators, a gym and exercise studio, a multi-purpose studio and a café. The current Lee Valley Ice Centre is one of the most popular ice-skating venues in the UK accommodating around 279,000 visits a year from across London and the wider region.

The new building will double the capacity to 557,000 visits per year and will expand the range of activities that can be run at the centre concurrently. This will be to the benefit of the community which will also be able to use the new venue as a base to explore the surrounding green spaces.

The entire site for Lee Valley Ice Centre is within Metropolitan Open Land (MOL) — a land designation which is afforded the same level of protection as the Metropolitan Green Belt.

The northern edge of the site faces onto Leyton Marsh and the north west corner of the site is designated as a Site of Metropolitan Importance to Nature Conservation (SMINC), which extends along the edge of the River Lea to the north. As a result, the design team were acutely aware of their responsibility to bring forward a sensitive proposal for the site, which protected its unique natural character.

From the outset, one of the overarching principles of the project has been the need to produce as tight and efficient a building footprint as possible to mitigate the impact on MOL, the landscape of the Regional Park, and its biodiversity and habitat.

Locating the ice rinks to each side with the circulation and support spaces between, has allowed the building to be reduced to the minimum footprint possible, without compromising the functional layout. Further area savings have been made by closely following the curvature of the ice pads with the building line on the external corners.

The massing concept responds to its context by adopting the principle of a pavilion within the Regional Park, with a consistent architectural language to each elevation. There is no front or back to the building, each side addresses its surroundings in the same manner.

A heavy weight plinth to the lower portion of the elevation responds to the flat surroundings and anchors the building within the landscape. The plinth forms a podium, above which sit the ice halls, which are contained internally with insulated cladding panels to create two environmentally control “fridges”.

The two fridges are wrapped by a copper-hued, metal-clad band. The band is separated from the Plinth, with a flowing curving lower edge revealing the internal volumes and creating the impression it is floating within the landscape.

Movement data analysis showed that the location and orientation of the existing ice centre on the site interrupted key circulation routes through the park. Although larger in size, the new facility has been rotated and sited in a way that natural movement through the green spaces has been restored, the landscaping strategy creating a welcoming gateway to the neighbouring Leyton Marsh.

The new centre is highly sustainable and would see environmental improvements that would transform the area with significant native planting and landscape enhancements, which will result in a significant biodiversity net gain of over 35%.

Energy efficiency in the new Ice Centre will be maximised through high performance insulation and highly efficient air source heat pumps. Roof mounted photovoltaic panels will generate energy for the new centre and melted ice will be filtered through reed beds and then used to create new wetland habitats on site with an emphasis on biodiversity enhancement.

The Lee Valley Ice Centre represents an exciting opportunity to create a much-needed facility for London and the wider region, promoting participation in ice sports in a way that benefits the sustainability and biodiversity of this unique site.

The event will be complemented by tours of Anfield, Goodison Park and M&S Bank Arena, as well as an innovative app and microsite – powered by Ungerboeck – providing attendees with opportunities to network pre, during and post event.