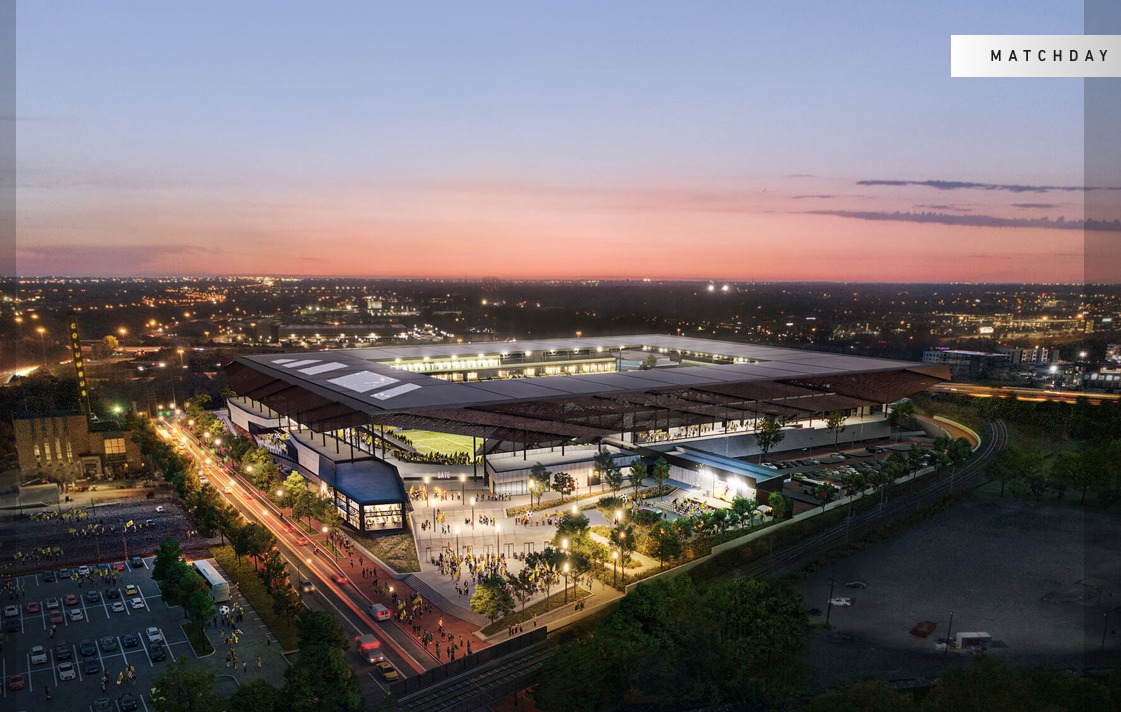 Major League Soccer side, Columbus Crew SC, has not only revealed a new stadium logo, but also unveiled updated renderings of their new US$230m (GBP£188.6m/€213.1m) Downtown Stadium, as construction on the 20,000-seat venue picks up pace.

Columbus Crew’s new stadium will be the crown jewel of the new ownership group, with the Haslam and Edwards families having stepped in to buy the franchise from Anthony Precourt, whose initial plan to move the club to Austin resulted in him securing the rights to an expansion franchise, Austin FC, which will make it’s MLS debut next year.

The latest imagery provides a more detailed look at the 360-degree roof and the special entrance for the Nordecke, where the Crew’s supporters group sits behind the goalmouth.

The venue will sit in the heart of the Arena District in downtown Columbus. In addition to serving as Columbus Crew’s new home, the stadium is set to include the first supporters’ beer garden in Major League Soccer and a brew hall that will be open on non-matchdays.

Beyond the stadium, the project includes a 40,000SF outdoor plaza, which will be open to the public on matchdays and non-event days. Current or new Full Season Ticket Members who maintain an active account status for the 2020 Columbus Crew SC season will have priority over the waitlist in selecting seats in the new downtown stadium.

The stadium will include a steep seating bowl, designed to put supporters close to the action and provide the best experience. Similarly, the stadium’s wrap-around roof will provide protection over each stand and amplify the noise back to the pitch, helping enhance the matchday atmosphere.

Crew’s new home will be divided into four unique stands, each of which will have its own identity and design that reflects the vibrancy and diversity of Columbus’ urban neighbourhoods.

In addition to the open concourse, the stadium will include the following:

Haslam Sports Group and the Edwards Family, investor-operators of Columbus Crew SC, announced earlier this month, in conjunction with Columbus-based The Pizzuti Companies, the creation of a joint venture for the commercial development of Confluence Village in downtown Columbus. The joint venture will develop the land adjacent to what will be a world-class open-air stadium that will host soccer, entertainment and corporate events, scheduled to open in July 2021.

Through their development of Confluence Village, the Crew and Pizzuti will transform the surrounding area that has been vacant for decades, with Phase I of the development anticipated to include office; other commercial, non-office; residential; and green space.

A key element of the joint venture includes a commitment to develop residential units that meet City Workforce Housing standards to better serve the Columbus community, and support the important work of The City of Columbus Departments of Neighborhoods and Development, led by Mayor Andrew J. Ginther.

Additional details regarding the residential component of the development will be announced in the near future.

Haslam Sports Group and Pizzuti’s joint venture expands their collaborative partnership, as the Club’s Experience Center was constructed at The Offices at The Sutton, Pizzuti’s latest mixed-use development in the Short North Arts District in Columbus. The Experience Center, which features 6,376SF of storefront along High Street and First Avenue, serves as the central location for premium ticket sales and sponsorships for the new Columbus Crew Stadium.

Construction is continuing apace on the Downtown Stadium, with the Columbus Crew SC and contractors, Turner Construction, having commenced the next major phase of development at the site on Wednesday by erecting the first steel beam in recognition of all frontline workers who continue to push forward during this time.

The first beam, labelled with an #InThisTogetherOhio decal and signed by members of the Crew’s Front Office, is over 23ft long and weighs 1.7 tons. It was erected in the Southeast corner of the stadium at pitch level and marks the start of the first sequence of steel to be brought in to Columbus and erected. The first sequence involved five truckloads worth of steel, with more to come over the ensuing months.

All of the steel material is domestically sourced, while the fabrication is occurring in three locations through the United States: Bellevue, Ohio, Charlotte, N.C., and Dublin, GA. The steel fabrication itself is estimated to take 113,610 manhours.

A dedicated crane for steel erection on the south and east side of the stadium was built on-site over the course of two days, with another crane set to be built and service the north and west sides as construction continues from the inside-out. As many as 50 beams are able to be placed in a day, though the higher the beams are placed – such as in the canopy – the longer it takes.

As each beam is placed, it’s done as straight and flush as possible, but it cannot be completely settled until every piece is erected. Once all the steel is laid out, a separate group of workers will come to tighten bolts and weld the steel to ensure everything is plum. The steel frame will be completed later this year, followed by the canopy’s completion closer to late autumn/fall.

With the first steel beam erected, the outward expansion of the stadium will quickly take shape, starting with the south side, while the Nordecke structural steel erection is targeted for August.

Barring construction delays and any other complications brought about by the Coronavirus pandemic, the stadium is slated for completion by the summer of 2021.