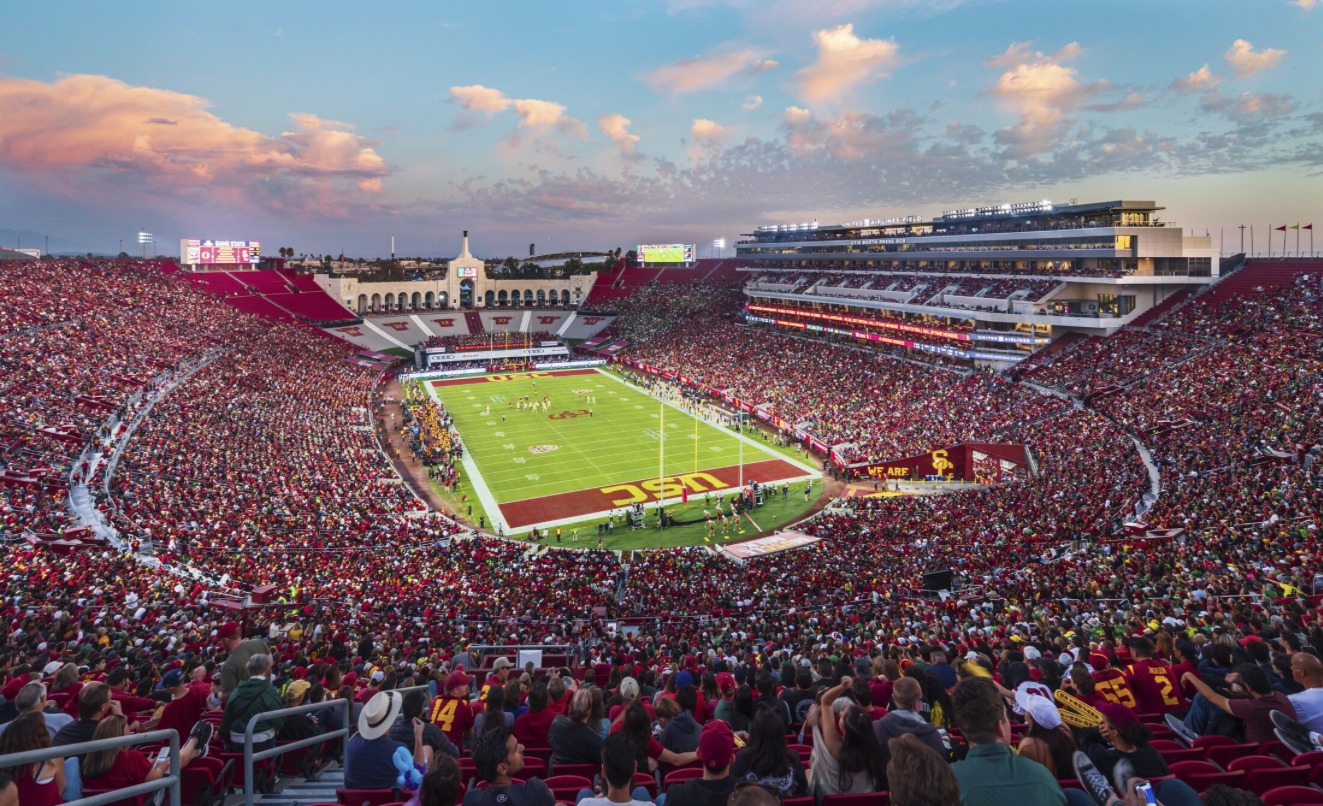 In this article, DLR Group Principal, Don Barnum, Global Sports Leader, discusses the subject of preserving the icon that is the Los Angeles Memorial Coliseum, and describes how they tackled the awesome challenge of its renovation and restoration.

Built in 1923, the Los Angeles Memorial Coliseum (LAMC) has been a beloved venue with both historical relevance and cultural significance worldwide.

Since the inaugural University of Southern California Trojan game held on October 6, 1923, the Coliseum has hosted two Olympics, two Super Bowls, a World Series, a Papal Mass, visits by three Presidents, and countless iconic sporting events. Now home to the USC Trojans and the Los Angeles Rams, the stadium is one of four historic athletic stadiums designated as a National Historic Landmark by the National Parks Service. Declared as a state and national landmark in 1984, the LAMC has welcomed more than 118 million visitors.

As many years of fandom have ensued, significant renovations were necessary to meet the high expectations of fans in Los Angeles, and the renowned USC Trojans. DLR Group was enlisted to enhance one of the most recognisable stadiums in the world, preserving the Coliseum’s official Landmark status while also maintaining the sense of place the Coliseum has in Los Angeles culture.

DLR Group led the design of the US$315m renovation that modernised the stadium, while honouring the tradition and heritage of the widely recognised venue. DLR Group’s design upholds the historical integrity of the LAMC by preserving the peristyle, as well as the entire perimeter enclosure and the profile of the original seating bowl. The iconic peristyle has been improved by removing all signage, advertising and video screens that were added over time, and restoring the travertine stone tile and decorative mural under the centre arch to bring it back to its intended grandeur.

DLR Group’s scope of work encompassed over 1,000,000 SF of space throughout the Coliseum. Improvements were made to enhance the fan experience. To upgrade comfort for spectators, DLR Group replaced every seat and added handrails in the seating bowl. The seats are now wider and have increased leg room in many areas. Adding aisles and repairing steps took place to ensure patron safety when traveling to and from their seats. The overall renovations have reduced the capacity of the Coliseum from 93,600 to 77,500.

During the renovation, the entry concourses were also updated, new field and stadium lighting were installed, and audio and video were improved with two new large screens placed at the east end of the stadium. Replacements to the electrical, mechanical, and plumbing systems took place to meet current standards. Additionally, Wi-Fi and Cellular service bandwidth was amplified throughout the venue.

The focal point of the renovation is the new Scholarship Club Tower. Located in the south grandstand, the tower is seamlessly embedded into the seating bowl and positions premium seating closer to the field than most similar scale stadiums. The new design element preserves the historic perimeter of the Coliseum exterior wall and impacts less than 15 percent of the existing seating bowl. This seven-storey tower gives fans new ways to experience Trojan football and other live events.

The tower includes an upgraded press box, 22 standard suites, 1,100 club seats with access to a private lounge, 24 loge boxes with a lounge, 20 Founder’s Suites and the Trojan Athletic Fund seating concourse. With its rooftop terrace, the tower gives field views while also providing breathtaking views of the ocean, downtown, the Hollywood Sign and the entire Los Angeles basin.

The design inspiration behind the tower was the city of Los Angeles and Trojan pride. The classic red and gold is seen throughout the space and creates an elevated game day experience.

Guests and visitors are enveloped in the vibrant culture of the school and importance of the Coliseum to the history and culture of the City of Los Angeles and southern California. Walking into the tower, people instantly feel connected to the rich history of the space and know that this sporting icon will continue to be a strong symbol of Los Angeles.

Promise for the Future

The renovation restores Los Angeles Memorial Coliseum’s standing as a viable public asset for the next century. It ensures that the facility meets the needs of USC football, as well as the needs of concerts, sporting and cultural events to create a multipurpose facility that is operationally and economically sustainable. And it maintains its notable stature as one of the most recognised stadiums in the world.

DLR Group designed the renovation, while the construction was a joint venture of Hathaway Dinwiddie and AECOM Hunt.

The renovation was privately funded by USC and, under the guidance of the Los Angeles Conservancy, preserves the Coliseum’s historic nature.

The renovated Coliseum is the crown jewel of the renaissance of Exposition Park, along with the new Banc of California Stadium and the Lucas Museum of Narrative Art.

Renovation at a glance

Those attending events at the newly transformed Coliseum can now enjoy:

The next edition of ALSD International – Europe’s leading event for the Premium Seat & Sports Hospitality sector – is being held at Liverpool Football Club’s iconic Anfield Stadium, October 12-13. The high-level conference will examine how to increase revenue through new builds, renovations, service expansions & the latest technology, and how to recoup lost revenue post COVID-19.

The 2020 edition of ALSD International – organised by the Association of Luxury Suite Directors together with Sports Venue Business – will feature an exhibition hall showcasing the latest products, services & solutions, behind-the-scenes tours of Anfield Stadium, Goodison Park and M&S Bank Arena, in addition to numerous networking events, ensuring optimised opportunities to knowledge-share, network and do business.