London Stadium and O2 team up to keep fans connected

London Stadium has kicked off plans to deliver the fastest free stadium Wi-Fi in the UK to sports and entertainment fans, following a tie-up with O2 Business and Cisco.

The new London Stadium Wi-Fi network will deliver high-speed internet to every seat in the UK’s  most successful multi-use venue, allowing users on any network to remain connected throughout every event day.

As part of a major improvement project, London Stadium’s original fibre backbone infrastructure from London 2012 has been enhanced with new high-speed data cabling. Designed, installed and tested by O2 Business, the new Wi-Fi access points use similar technology to that in use at The O2 Arena, Twickenham Stadium and the Coca-Cola London Eye.

As part of the introduction, the system will be tested during November and December, prior to a full launch in February 2020.

It’s our ambition to be the most connected stadium in Europe, and the delivery of super-fast Wi-Fi is just the beginning of these plans.

We’re committed to providing a world-class event day experience all year round, whether you visit London Stadium to watch Premier League football, Major League Baseball, international athletics, or an amazing concert, our goal is for fans to have access to the fastest Wi-Fi of any stadium in the UK, direct from their seats.

We’re very proud to be working with London Stadium to deliver fast, free, High Density Wi-Fi in such an iconic, multi-purpose venue. We know how important it is for people to rely on consistent connectivity, wherever they are – and we’re looking forward to helping sports and entertainment fans benefit from a seamless Wi-Fi service at every event and fixture.

The project has been aided by London Stadium’s unique architecture, too. Using the venue’s cantilevered roof and gantry, O2 Business has installed a bespoke overhead antenna design to support Cisco’s High-Density Stadium Wi-Fi hardware, allowing blanket coverage for every seat.

London Stadium is the UK’s largest multi-use venue, welcoming more than 2 million visitors a year for its programme of global events, and serves as a thriving community hub.

Home to West Ham United in the Premier League, to UK Athletics as well as playing host to global entertainers in concerts through the summer months. London Stadium has also hosted Major League Baseball, the Rugby World Cup, the RFL Four Nations and conferences.

London Stadium helps drive regeneration in east London and serves as a base for many community events.

O2 is a mobile network operator and the principal commercial brand of Telefónica UK Limited, which is part of the global telecommunications group Telefónica S.A, headquartered in Spain and operating in Europe, and North, Central and South America.

O2 was awarded Best Network Coverage in 2019 by uSwitch, for a second year in a row, and with over 34 million connections to the network, it runs 2G, 3G, 4G and 5G services across the UK, as well as operating its nationwide O2 Wifi service. The company is the network of choice for mobile virtual network operators such as giffgaff, Sky Mobile and Lyca Mobile as well as managing a 50:50 joint venture with Tesco for Tesco Mobile.

O2 has around 6,700 employees and over 450 retail stores and sponsors England Rugby, The O2 and 20 O2 Academy music venues across the UK. Through a comprehensive sustainability strategy O2 is also creating work experience opportunities for 16-24 year olds via its GoThinkBig platform, enabling customers to reduce their impact on the environment by recycling their old devices through O2 Recycle and, in partnership with the NSPCC, helping parents to keep their children safe online.

O2 is the only mobile operator in the 2019 Social Mobility Employer Index and was named as one of the best places to work in the 2019 Glassdoor Employee’s Choice Award.

Check out the video interview Sports Venue Business CEO Katie McIntyre conducted with Ken Martin, GM/Executive Director, Global Sales, Sports & Entertainment Solutions Group at Cisco, who explains how they work to help venues realise an ROI when it comes to investing in technology and to provide solutions to help enhance the guest experience. 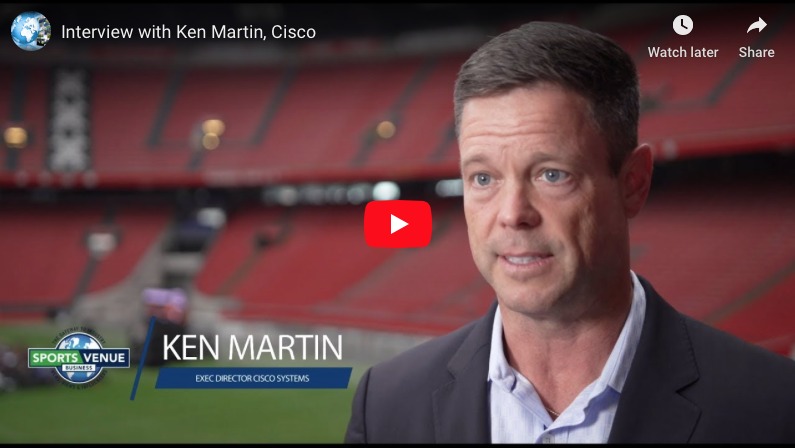