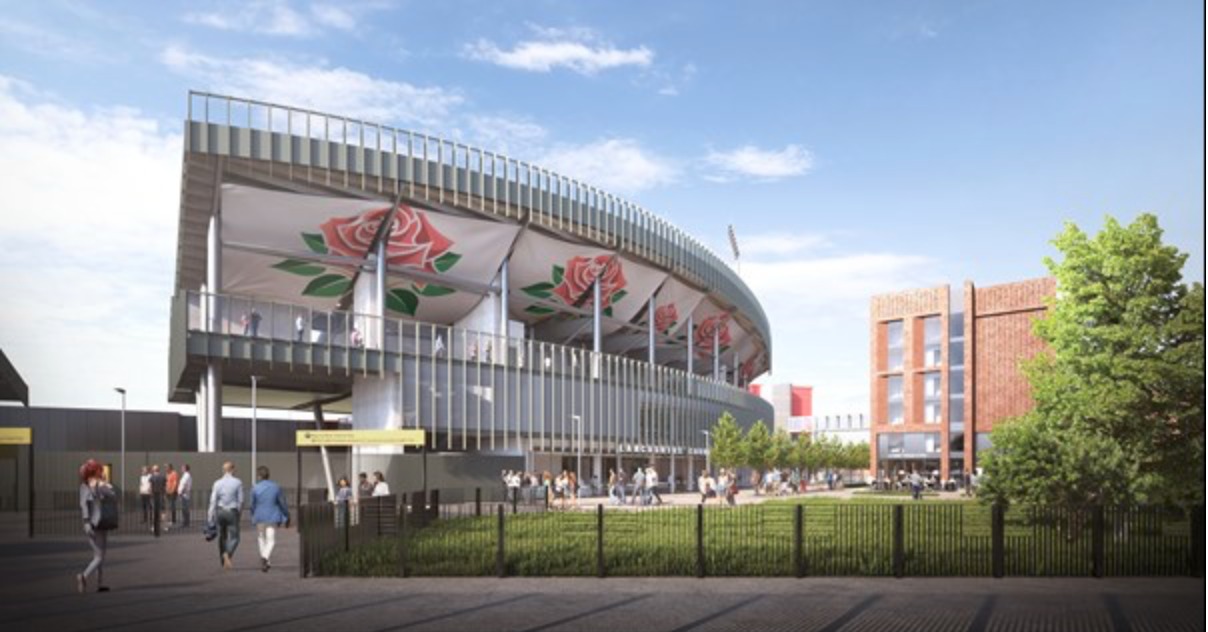 Trafford Council and Lancashire Cricket have announced transformational plans in the first phase of the development of the new Civic Quarter.

Trafford Council and its partners have taken a major step forward in delivering ambitious plans to transform the area around the Town Hall and surrounding buildings into a new ‘Civic Quarter.’

The Council’s proposals for the area include building a new leisure centre; an improved public realm, opportunities for new homes and offices and improved cycle and pedestrian routes. They also include the possible development of a new public piazza and ‘processional route’ linking Lancashire Cricket Club with Manchester United’s Old Trafford stadium. The strategic vision is being created with consultancy team Planit-IE, Feilden Clegg Bradley Studios and Avison Young.

And this week, Lancashire Cricket Club also announced it is progressing plans for further significant development at Emirates Old Trafford alongside the Council’s developing proposals.

The new 4,850-seater stand, which replaces the existing Red Rose Suite, is set to feature a pitch-view suite, enhanced Members facilities, a heritage centre, ticket office and retail shop which will face directly on to Brian Statham Way. It will take the capacity of Emirates Old Trafford to 26,700, making it the largest cricket ground outside of London.

The new stand, which will replace the Red Rose Suite, will complete the redevelopment of Emirates Old Trafford which is now an award-winning, world class and all-encompassing stadium.

The UA92 higher education establishment, which was an important first element to the development of the Civic Quarter, opened on the former Kellogg’s site in September and has taken on its first cohort of students. The next stage of development involves proposed plans for the remainder of the site, which is part of a joint venture between Trafford Council and Bruntwood; who will consult with residents on the proposals in early November.

We are really excited about these recent developments – the establishment of a Civic Quarter presents a fantastic opportunity to further develop local amenities, improve community use of the area and completely transform our public spaces. It aims to create a fantastic place for those who live and work here.

The people of Trafford are at the centre of these plans becoming a reality. We will consult with residents every step of the way as we continue the journey to creating a vibrant and amazing Civic Quarter.

Investing in our town centres and creating a vibrant and engaging retail and leisure proposition is crucial to future proofing our towns and shoring up our regional cities, and we are incredibly excited about what the future holds for Trafford.

The latest plans are key to the wider vision for the redevelopment of the area and it’s brilliant to see these continuing at pace. We look forward to seeing these plans come to fruition and will continue to work closely with the local community and our development partners as we bring forward this major redevelopment.

The vision for the redevelopment of the wider area, known as the draft Civic Quarter Area Action Plan, is also gathering pace and residents will be consulted on the proposals in early 2020.

ALSD International – Europe’s one and only event dedicated to the Premium Seat & Hospitality sector – is coming to Croke Park Stadium in Dublin, Ireland, this October 28-29, where some 50+ high-calibre experts from across Europe and North America will be providing insights on how to increase revenues through new builds, renovations and service expansions, as well as via the latest F&B and technology offerings.