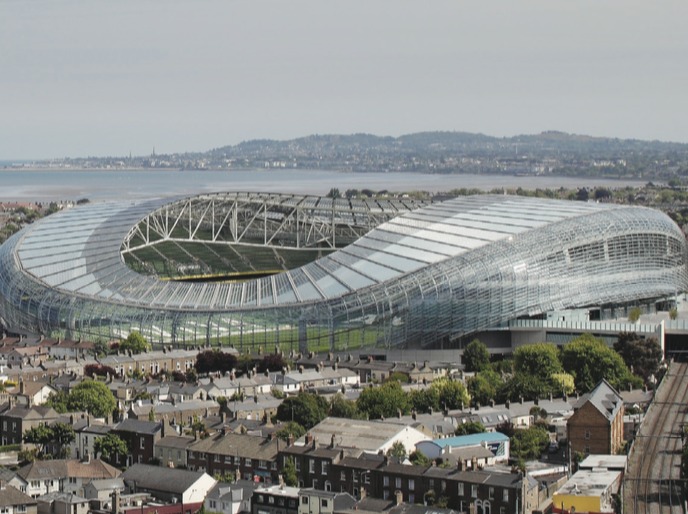 Athletes, spectators and fans watching any of the broad array of international events staged at Aviva Stadium are in store for an even greater entertainment experience thanks to a state-of-the-art LED lighting system installed at the venue.

Recognised globally for hosting everything from rugby, football and American football to world-class concerts and major international business conferences, Aviva Stadium has always prided itself on delivering the best possible stadium experience.

As one of the 12 host venues for the UEFA EURO 2020 Finals next year, the stadium’s board determined that it needed an advanced new lighting system for the international tournament. The new lighting would also need to meet the distinctive lighting requirements for the various other events at the stadium, such as those set forth by UEFA, FIFA and World Rugby.

Aviva Stadium is a unique international venue with a rich history and longstanding commitment to providing exceptional experiences. As we continue to evolve the stadium and stay at the forefront of sports and entertainment, it was vital to install a lighting system with the most advanced technology, capable of providing the best possible experience for players and spectators, meet the enhanced light levels required for a variety of sanctioning bodies, and produce exciting new special effects scenes and light shows.

Aviva Stadium operations and project managers conducted research into a range of potential options from a variety of manufacturers. They ultimately found that the Total Light Control—TLC for LED™ system designed by Musco Sports Lighting to be the best stadium lighting solution on the market.

Musco installed the original lighting system at Aviva when it was built in 2010, replacing the iconic Lansdowne Road stadium, which utilised a high intensity discharge (HID) light source. While that system was still performing well, the advanced technology of Musco’s system using the LED light source offers a number of key new benefits, including the ability to turn the stadium’s lighting on and off instantly, improving match continuity and efficiency.

The system also features patented fixture visoring that greatly improves light control and minimises the impact of glare, as well as innovative lighting controls by StadiumFX, providing an exciting range of cutting-edge special effects scenes and light shows with light-to-sound synchronisation. Installation was handled by McSherry Electrical, which also installed the stadium’s original HID lighting, allowing for a unique depth of knowledge of Aviva’s structural environment as well as Musco’s technology and team.

We’re very familiar with Musco and its exceptional reputation for designing stadium lighting systems. They bring proven expertise when it comes to LED technology, minimising glare, and managing the many different challenges of this project. In addition the long-term warranty means we won’t have to concern ourselves with maintenance costs well into the future. Once again, they proved to be an ideal partner.

The new lighting at Aviva is Musco’s same system-based LED technology that’s been installed at other iconic venues throughout Europe and around the world, including Tottenham Hotspur Stadium, Emirates Stadium, Manchester Arena, Twickenham Stadium and Wimbledon’s Centre Court. It’s backed up by a long-term warranty that includes all parts and labour, which will eliminate maintenance costs for stadium ownership well into the future.

Aviva Stadium hosts all kinds of different sports and entertainment events throughout the year, many of which are international in scale and draw a global audience. We worked closely with their team and our partners at McSherry Electrical and StadiumFX to deliver a customised LED system that will meet the unique lighting needs for all of those events and provide an unforgettable entertainment experience for fans.

The Aviva Stadium is a sports stadium located in Dublin, Ireland, with a capacity for 51,700 spectators. It is built on the site of the former Lansdowne Road stadium, which was demolished in 2007, and replacing it as home to the Irish Rugby Football Union (IRFU) team and the Football Association of Ireland’s Irish soccer team.

The stadium, located adjacent to Lansdowne Road railway station, officially opened on 14 May 2010, and is Ireland’s first, and only, UEFA Category 4 Stadium. In 2011, it hosted the Europa League Final. It also hosted the inaugural Nations Cup, as well as the regular home fixtures of the national rugby team, national football team and some fixtures for Leinster Rugby from August 2010 onwards. The stadium is owned by the IRFU and the FAI.

In two days time, the Republic of Ireland will take on Switzerland in a UEFA EURO 2020 qualifier at the venue.

Those attending next month’s ALSD International event will be treated to behind-the-scenes tours of 3Arena and also Aviva Stadium, where they will enjoy a networking luncheon provided courtesy of Compass/Levy Ireland, before returning to the event’s host venue, Croke Park. A stellar lineup of 50+ expert speakers will provide invaluable insights on how to increase revenues through new builds, renovations and service expansions, as well as via the latest F&B and technology offerings over the course of this unmissable two-day event.

ALSD International, Europe’s one and only event dedicated to the Premium Seat & Hospitality sector, is being held at Croke Park Stadium in Dublin, Ireland, this October, 28-29.