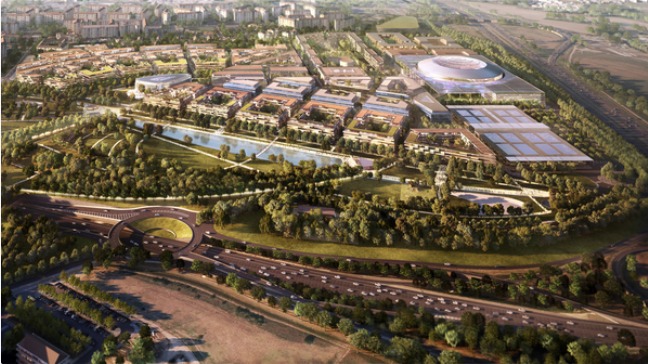 Venue development, advisory and investment company, Oak View Group (OVG), is set to construct and operate a new arena in Milan, Italy; its first music and sports arena outside of the United States.

Founded in 2015 by Tim Leiweke and Irving Azor, OVG has partnered with Live Nation – the world’s leading live entertainment company – to build and run the Santa Giulia Arena, a world-class sports and entertainment development, with an expected capacity of around 17,000.

The new privately-funded venue is to be located in Milan’s Santa Giulia district. A ‘head of terms’ agreement has been signed with property and infrastructure business Risanamento S.p.A and Lendlease to construct and operate the venue. The project is likely commence in 2021 as part of a wider regeneration of the Santa Giulia district, with the venue due to open by 2024.

We’re delighted to announce our first European partnership, bringing a state-of-the-art entertainment facility to Milan. The new arena will be an exciting addition for the city and an important part of hosting what would be an inspiring 2026 Winter Olympics.

Oak View Group and Live Nation have years of experience working together and are the ideal partners to deliver and run the Santa Giulia Arena.

We’re looking forward to working with Risanamento and Lendlease as part of their major regeneration project, and to announcing more European partnerships soon.

Existing music arenas and large scale venues in or near Milan include the 12,700-capacity Mediolanum Forum (opened in 1990 and managed by the ForumNet Group) and the 80,000-capacity San Siro stadium, which is set to host Ed Sheeran and Muse concerts this summer.

The combined Italian bid of Milan and Cortina d’Ampezzo is one of three candidates in the running to host the 2026 Winter Olympic and Paralympic Games alongside Stockholm. If Milan’s bid is successful, OVG say the new Santa Giulia Arena would host the Olympic Ice Hockey tournament.

This marks OVG’s first project outside of the United States and follows the launch of OVG International in March of this year, a London-based entity that will explore opportunities in the UK, Europe, Asia and the Middle East.

The live events market has grown significantly in the United States since Oak View Group launched three years ago, and we see a huge opportunity to drive similar growth internationally by creating world-class experiences in world-class arenas.

We look forward to extending the Arena and Stadium Alliance to like-minded venues outside North America and to announcing more about OVG International’s plans soon.

In addition to major arena development projects at the Key Arena in Seattle, Belmont for the New York Islanders in New York, and a new arena facility for The University of Texas in Austin, Oak View Group runs the Arena and Stadium Alliance, an invitation-only partnership of 28 arenas in the United States that enables independent venues to attract global sponsorship opportunities, additional events and content.