It was a little over a year ago that the Muttitt family put the first spade in the ground to mark the start of work on Brentford Community Stadium, the new home of Brentford Football Club and London Irish rugby football club.

The stands started rising from the ground a few months later following final preparatory works and 12 months on, the structure of the stadium is almost complete. Take a look at how the stadium has grown over the past year.

The new stadium will be capable of hosting 17,250 spectators, which includes 2,930 Premium Seats, allowing growth of support and the ability to realise an important new revenue stream in the pursuit of top flight football.

Premium seat hospitality packages are already on sale and preparation is underway for the sale of Season Tickets at the new stadium later this year. Some key dates for fans’ diaries can be seen below: 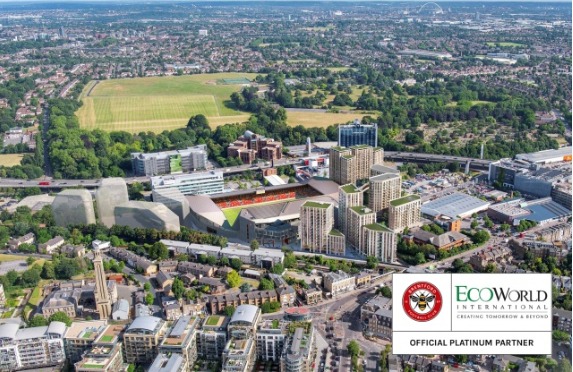 Brentford Football Club has enhanced its relationship with EcoWorld London, the business delivering the Sky Bet Championship side’s new home, alongside its stadium subcontractor, Buckingham Group. Already the Club’s development partner on its 17,250-seater Brentford Community Stadium, which is set to open next summer, EcoWorld London has strengthened that relationship with Brentford Football Club by becoming an Official Platinum Partner for the remainder of the 2018/19 season.

EcoWorld London was launched in 2018 after EcoWorld International acquired 70 per cent of Willmott Dixon’s residential business. It currently has nine ongoing projects in the UK, with a total value of around £3.4bn, which includes the Brentford Community Stadium development.

The project is an important part of the wider regeneration of the area known as Brentford East, set to create a new neighbourhood for London. In addition to the new state-of-the-art stadium, the development will deliver a new purpose-built location for Brentford FC Community Sports Trust, a public square with shops, cafes and restaurants as well as more than 900 new homes for sale and rent.

The partnership will see Brentford FC and EcoWorld London supporting each other on upcoming projects and events. On Saturday 6 April, the Verdo-Kew Bridge marketing suite, for the new homes within the stadium development, will open to the public. Fans are encouraged to visit the suite during April and learn more about the new neighbourhood being created around the stadium or visit verdo-kewbridge.co.uk for more information. Visitors to the suite in April will also have an opportunity to win prizes including a Season Ticket for Brentford’s final season at Griffin Park, a signed shirt and a signed ball.

We are delighted to be coming on board as an Official Platinum Partner for the season. As a business, our goal is ultimately to create sustainable places where communities can grow and thrive for years to come. The new Brentford Community Stadium and the surrounding development is just the beginning of the journey and this partnership is a testament to our commitment to supporting communities both old and new, from the fans to the residents of the new homes we are building. We look forward to further collaboration with Brentford FC through this partnership.

The stadium has been designed by AFL Architects.

Find out more at newstadium.brentfordfc.com

Industry experts from across Europe and North America will be sharing insights regarding Premium Seating & Hospitality and how to increase revenue through new builds, renovations and service expansions, as well as via the latest F&B and Tech offerings, at this October’s ALSD International event, being held at Croke Park Stadium in Dublin, Ireland.