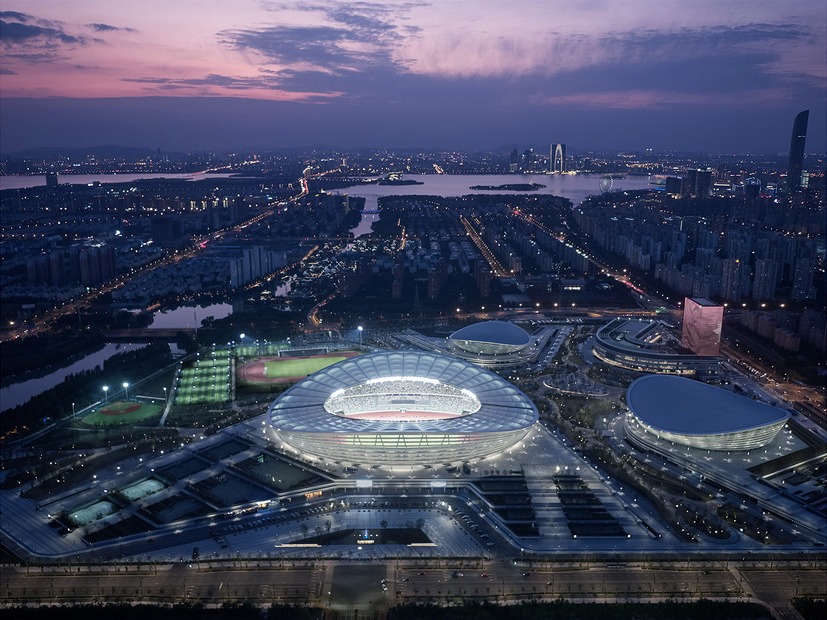 The Olympic Sports Centre in Suzhou, built to a design by Gerkan, Marg and Partners (gmp), has opened its doors. In a 47 hectare publicly accessible landscape park, a stadium, training and leisure pool, indoor arena, shopping centre and extensive sports facilities for the surrounding residential areas have been completed.

For the very first time in China, a single-skin cable network roof construction has been used to cover the large sports buildings. With their curved roofs, the buildings form a distinct ensemble and a new centre of that part of the city.

Suzhou is known in China as a garden city. Nine of its historic gardens have been awarded UNESCO World Heritage status. Unsurprisingly, the design of the Olympic Sports Centre took its cue from these Chinese landscape gardens. The result is a lively sports and citizens’ park with a pleasing mixture of functions, including four large buildings amongst green spaces and water features: the stadium with a capacity of 45,000 and a span of 250m, the aquatics centre with 3,000 seats, the indoor arena with 13,000 seats, and the shopping centre.

To the south, the park opens out to the Xietang River and, along winding pathways, provides various vistas across waterways, the architecture, and landscape.

The design of the building ensemble is deliberately minimalist in style and the individual buildings appear restrained despite their size. The 12m high podiums project into the parkland like peninsulas, and are accessed from the road. The podiums and the facades feature horizontal lines in light natural stone and aluminium panels that are sculpted like a relief. In their construction the buildings are uniformly developed.

For the first time in China, a single-skin cable network roof construction has been used to cover the large sports buildings. This results in boldly sweeping paraboloid shells that rest on V-shaped supports and can be seen not just in the immediate neighbourhood but also from further afield. The stadium roof is covered by a PTFE membrane, whereas the roofs of the aquatics centre and indoor arena are finished with metal sheets consisting of a durable aluminium/magnesium/manganese alloy.

A shopping centre with offices and a hotel supplements the three sports buildings, and contributes to the liveliness of the entire site. The park area contains a wide range of open sports facilities for football, tennis, and other ball sports that can be hired privately. Thanks to this multifaceted use concept, the Olympic Sports Centre has quickly become a template for the design of other sports facilities in China and has become an attractive neighbourhood centre. 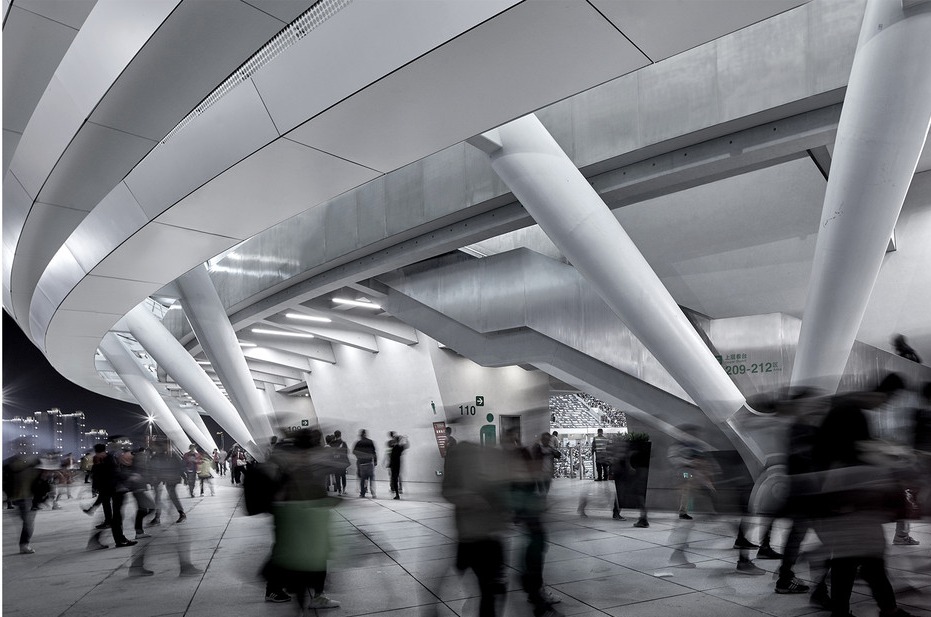