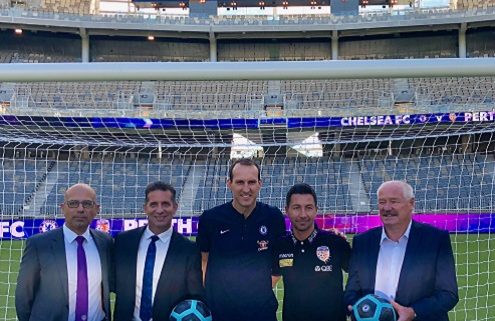 Reigning English Premier League (EPL) champions Chelsea, one of the world’s most popular football clubs, has announced they will play local A-League side, Perth Glory at Optus Stadium on Monday July 23, 2018.

This blockbuster match is set to attract a crowd of over 60,000 including a significant number of visitors from interstate and overseas who are expected to travel to Perth for this Australia-exclusive game.
Former Chelsea and Australia’s most capped international player, Mark Schwarzer, was at Optus Stadium for the announcement, he said:

This venue is truly spectacular, I know the team will be hugely excited to be the first Premier League club to play here.
There are thousands of passionate Chelsea supporters across Australia and south-east Asia. I’d encourage them to come and watch the team play at this world-class venue and take some extra time to enjoy the very best of Perth and Western Australia.

Chelsea Football Club Chairman, Bruce Buck, added that the match would be an exciting opportunity for the squad to visit supporters:

We will be taking a strong squad to Perth as we prepare for the 2018/19 season. Of course, we have a long way to go in the current campaign but we can already look forward to an exciting pre-season.
Optus Stadium will be a fantastic and fitting venue for us to visit our passionate Asia Pacific supporters once more and take part in an entertaining match against Perth Glory.

Optus Stadium has been open for less than a month and has already had nearly 180,000 visitors attend three sold-out events, receiving rave reviews along the way.
We can’t wait to welcome Chelsea in July, they are one of the biggest international football clubs with millions of fans around the world. To have the team play an Australian-exclusive match in our new Stadium is a huge coup for the State.
We look forward to welcoming thousands of West Australians plus visitors from interstate and overseas to Perth for this match.

The Blues visit to Perth is also expected to also include a schedule of activities leading up to match day to celebrate football and all things Chelsea.
A range of exciting Premium Hospitality and Travel Packages are on sale now.
Optus Stadium officially opened its doors on January 21, 2018, and hosted a record-breaking AFL Women’s match last Saturday, which will be followed by Ed Sheeran concerts on 2 and 3 March, the Perth NRL Double Header on 10 March, the opening round of the AFL Premiership Season on 25 March, Nitro Circus on 22 April and Taylor Swift on 19 October 2018.

The multi-purpose, 60,000-seat Optus Stadium is a world-class venue. The commitment to a ‘fans first’ stadium has resulted in an innovative design ensuring an exceptional event atmosphere and home ground advantage that can only be experienced by being there.