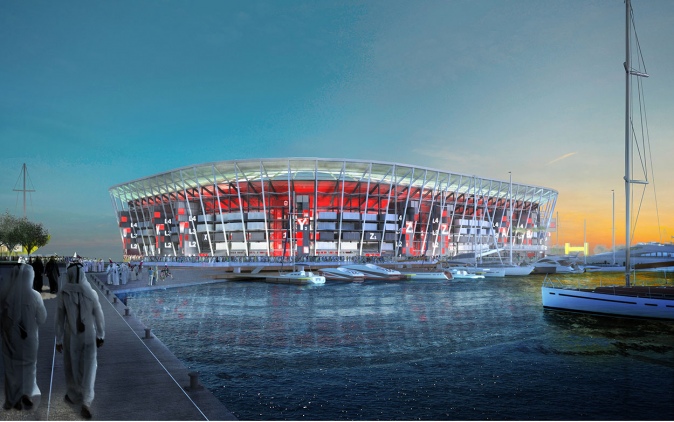 According to the Secretary General of the Supreme Committee for Delivery & Legacy (SC), the truly innovative design concept of Ras Abu Aboud Stadium could change forever the way in which major event venues are built and utilised moving forwards.

Speaking after the latest 2022 FIFA World Cup™ stadium design launch – taking the total to seven – H.E. Hassan Al Thawadi, Secretary General of the SC, said the groundbreaking project to efficiently build a ‘fully demountable’ venue will be another of the tournament’s lasting legacies:

It is a unique design that we believe will serve as a benchmark for demountable temporary stadiums throughout the world. That in itself will leave a legacy in the design of stadiums by the State of Qatar and the 2022 World Cup.

Designed by Fenwick Iribarren Architects – the firm also behind Qatar Foundation Stadium’s spectacular ‘Diamond in the Desert’ – Ras Abu Aboud Stadium will be completely disassembled after the tournament – a first for a FIFA World Cup™ venue and a signal of Qatar’s commitment to sustainability.

Many elements of the arena, including all 40,000 seats, the containers and even the roof, will be re-used, providing valuable infrastructure to sporting and non-sporting projects.

Something else that will mean the legacy of the FIFA World Cup™ in the Middle East lives long after the curtain comes down on 2022, as Al Thawadi commented:

The land will be re-utilised after 2022. It will either be returned to the government or utilised for private investment – and considering the land is in the heartland of the country, it will obviously benefit the local area.

The location of Ras Abu Aboud Stadium is indeed another of its draws. It will sit on the shoreline of the Arabian Gulf, and across the water from Doha’s stunning West Bay skyline. Quite the backdrop but also an area of historical significance.

The location of Ras Abu Aboud, for us, holds a very dear place in our hearts. It is home to Qatar Petroleum, and the location represents part of our development history – especially during the early days of Qatar’s story and Qatar’s growth and prosperity.

There is of course another element that makes this location very special – it is one of the few remaining areas in the city of Doha that is alongside a beach. It’s actually an extension of the Corniche, which is our water-facing area. It’s a very beautiful and valuable location for us. 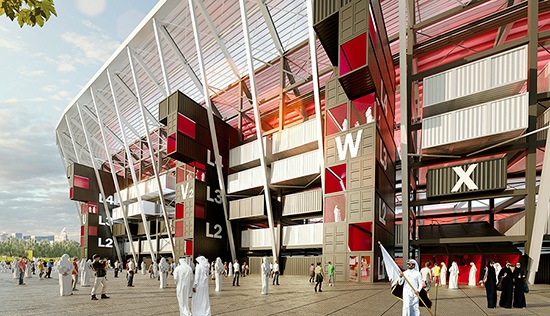 Constructed using shipping containers, removable seats and other modular ‘building blocks’, not only will this innovative, 40,000-seat venue have a remarkable design, but it will be entirely dismantled and repurposed after the 2022 FIFA World Cup Qatar™. Its parts will be used in other sporting or non-sporting projects, setting a new standard in sustainability and introducing bold new ideas in tournament legacy planning.

Much of Ras Abu Aboud Stadium will be created from recyclable sources, including the shipping containers used to transport materials for its construction, highlighting Qatar’s commitment to innovation and sustainability.

Located on the shores of the Gulf, looking across to Doha’s dazzling West Bay skyline, Ras Abu Aboud Stadium will be a spectacular venue for matches up to the quarter-finals of the 2022 FIFA World Cup Qatar™. Following the tournament’s conclusion, the stadium will be dismantled and make way for a waterfront development for local people to enjoy.

The venue’s temporary nature and clever modular design will mean that fewer building materials will be required than in traditional stadium building, helping to keep construction costs down. And with other projects re-using the seats, roof and other components of the arena, parts of the venue will be utilised for years and even decades to come.

Minimising construction costs and ensuring regular future use are the key ingredients in making a new stadium (and indeed sporting mega events) sustainable, meaning the Ras Abu Aboud Stadium project looks sure to create an innovative blueprint others will follow.