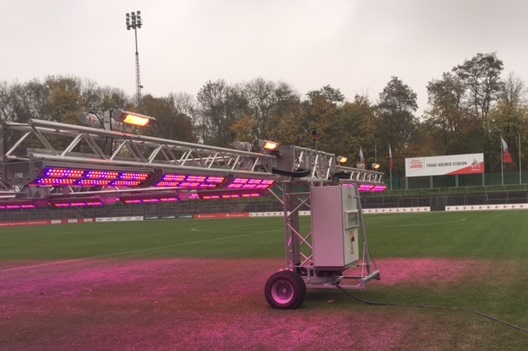 On November 9, 2017, a delegation representing the interests of a number of clubs and organisations from across Africa, Asia and Europe, along with members of the European Stadium & Safety Management Association (ESSMA) were treated to a special ‘Experience Tour’ of FC Köln’s stadium, which employs the revolutionary RHENAC GreenTec AG LED Stadium Grass Grow Lighting system that is being marketed by Recreational Systems Europe (RSE), an ESSMA Corporate Partner.

The day began in style aboard FC Köln’s team bus for the short journey from the KölnMesse – host venue for the biannual IAKS/FSB event – to the stadium. The expert guides for the morning Tour were Mr. Carsten Wenske, COO, Sport Turf Cultivation Department, RHENAC GreenTec AG, together with Mr. Arnoud Fiolet, Managing Partner, and Mr. Tom Mathys, Sales Agent, both of RSE, alongside Mr. Jungen Zielonka, FC Köln’s Head Groundsman.

Mr. Wenske started off by welcoming everyone and describing the problem at hand; being that today’s modern stadia feature aesthetically-pleasing roofs that protect fans from the elements, but by their virtue, they hinder healthy grass growth.

Mr. Mathys explained that RHENAC’s revolutionary solution is taking the stadium management industry by storm, with the German company being the first producer of LED Stadium Grow Lights that has managed to align the technical advantages of LED technology with the essential requirements for healthy grass growth; quite some achievement.

LED technology is known for consuming only a fraction of the energy conventional sodium vapour luminaires require when attributing to the growth of natural products like grasses. The technology also has an added advantage; it has a flexible approach to grass growth.

Light plays a different role in every stage of the lifecycle. First, it has to help the seed germinate, then, once the grass starts to grow, it requires continuous photosynthesis to ensure a strong, firm blade. On the other hand, the roots need to be able to settle firmly into the soil to deliver a dense and solid carpet. Most importantly, this whole process needs to happen in the shortest period possible, thereby ensuring a pristine pitch.

A LED luminaire is made up of many different LED’s that each can be directed and powered individually. They also produce a much wider colour rendering scope, allowing the system to be much more flexible, as well as more intense than conventional systems, delivering a tailored solution when it comes to the very specific growing requirements of each pitch. Despite the fact that to the naked eye, the lighting rig seemed to consist simply of red and blue LED’s, Mr. Mathys advised that each LED was in actual fact an ever so slightly different shade, so as to ensure that the full spectrum is covered. He advised that the red LED’s ensure healthy grass growth and the blue ones deliver grass density.

RHENAC’s LED Stadium Grow Lighting technology can be monitored and changed in real-time via the online dashboard. Being digital, groundsmen can follow events on-site – detecting changes in temperature and climate – and even change the program from their iPads accordingly.

For those stadiums experiencing colder climates, it is possible to have heat lamps integrated, which is highly beneficial, as Mr. Mathys explained: “The temperature can be measured automatically and the system reacts to ensure the best possible conditions for healthy grass growth. It is the decision of Groundsman to manage and influence how the grass grows (i.e. density, fast/slow, length, etc.), all of this can be controlled due to the fact the system offers the full light spectrum.”

Maintaining a quality training pitch is very important to us and has been an ongoing, continuous problem. However, the new LED’s have allowed us to take a giant leap in this regard and deliver a top quality, healthy pitch.

The system also contributes both to the environment and to the bottom line, as it delivers a significant reduction in energy requirements, meaning cost-savings for the users, and as the light is directed exclusively on the ground, it does not affect the surrounding flora and fauna.

In terms of the extensive research and development that has been conducted, Mr. Fiolet explained:

The RHENAC GreenTec AG grow lighting system has been extensively researched over the past three years. The Bio centre of the Ludwig-Maximilians University in Munich, Germany, being one of the partners.

Professor Dr. Jurgen Soll of the University, has said of the solution: “The LED lighting system provides, for the first time, illumination scenarios for physiological investigations in research, as well as optimised yields in production. They produce the spectral composition of the light according to the requirements set by the plant they illuminate [i.e. grass].”

When it comes to deciding on the number of Grow Lighting units required, Mr. Wenske explained that in order to deal with a full-size grass pitch, clubs/venues ideally needed to invest in twelve rigs/units, however, in most cases, he said eight was sufficient. He added that obviously, when using a smaller number, i.e. 4 or 6, the units would need to be moved more often.

In regards to physically moving the units, they can be moved in straight lines, thus ensuring minimum stress on the grass plants. The light weight of these rigs, with their wide tyres, is also an extremely important aspect, as other systems are heavy and can often cause tracks on the field, which is of course not good and places stress on the plants. And, when it comes to actually moving the RHENAC GreenTec AG solution, all that is needed is one groundsman and the touch of a button!

Most modern stadiums suffer from the same issue; the shadows caused by the roofing structures. This, in combination with humidity, means the grass plants are more vulnerable to fungus and algae infestations. RHENAC GreenTec AG have a solution for this too, in the form of their UVC lighting, which can be machine-mounted.

This virtually negates the need for pesticides by eradicating the DNA of the fungus and algae in the grass blades, which delivers significant cost-savings, as Mr. Zielonka confirmed:

We are employing the UVC lighting once a week and this is preventing new fungus and algae from growing. We now only need to use pesticides 3-4 times per year.

He also advised that it was necessary to drive at a set speed to ensure the UVC lighting was most effective.

The results we have achieved here at FC Köln are so good that we have decided to purchase a 6-metre-wide version of the UVC system to enable us to complete the job in half the time!

The next step in the evolution of this already revolutionary system will truly be the pièce de résistance, with RHENAC GreenTec AG together with RSE in the process of building a fully automated system at FC Schalke 04, which will cover the entire pitch. This will be a fixed structure, with lighting, sprinkler systems, IR heating and measuring devices all integrated. It will be able to adapt the light, heat and water emissions depending on the exact requirements of the area, and in real-time. Something that is unique in the world today!

Mr. Fiolet confirmed that the next Experience Tour will take place in May 2018 at FC Schalke 04, where attendees will be able to witness for themselves the brand new and totally revolutionary automated system in action, while also sharing their experiences and discussing the results with other groundsmen and women.

Many thanks to RSE and RHENAC GreenTec AG for inviting SVB’s Katie McIntyre to attend the Experience Tour at FC Köln and we will of course make sure to keep you updated regarding the Experience Tour to be held at FC Schalke next year. In the meantime, for further information on the system, go to: http://recreationalsystemseurope.com/