HomenewsFeaturesCase StudiesCASE STUDY: Celtic FC made history earlier this year with the installation of the first safe standing system at Celtic Park

CASE STUDY: Celtic FC made history earlier this year with the installation of the first safe standing system at Celtic Park 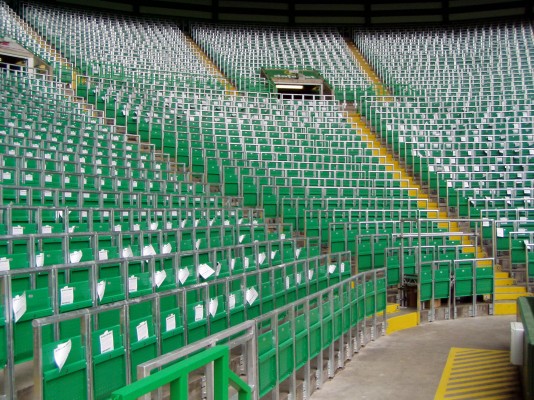 In 2016, Scottish champions Celtic FC made history as the installation of the first safe standing seating system (RailSeat) in the UK was completed at their home ground, Celtic Park. An area of the stadium features standing on the terraces for the 2016/17 season with the installation of nearly 3,000 Railseats.

Developed in response to fans’ demands for a return to standing sections at football matches, the RailSeat is an innovation in stadium seating, enabling spectators to stand safely to watch matches, whilst having the option to revert to seating when regulations require.

With Celtic pushing for this for over six years and Ferco supporting both them and the Football Supporters Federation (FSF) for more than 5 years, all eyes are now be on the English Premier League (EPL) for their reaction.

Jon Darch of the Football Supporters Federation (FSF), has visited numerous UK clubs with the Safe Standing Roadshow, demonstrating the benefits of standing safely at matches for both clubs and supporters alike.

With its design based on barrier technology and its robust seat and high back, the RailSeat forms a strong and continuous handrail to facilitate safe standing. Slim-line and compact, this unique stadium seat has been approved for use by both UEFA and FIFA for Champions League and World Cup matches.

Although widely used in Germany’s Bundesliga as standing accommodation for domestic matches, this is the first time RailSeats have been installed commercially in the UK.

The installation comes after Celtic were able to convince their local Safety Advisory Group and the authorities that these seats provided a safer environment for their fans.

The introduction of RailSeats is an investment in spectator safety by Celtic FC and an historic event for Ferco Seating Systems.

What is Safe Standing? (Wiki) >