In Brentford Football Club’s video interview with Director of Operations, Alan Walsh, we hear about the testing of Musco’s 168 LED lighting lamps at the new stadium, as well as the fact that the seating installation is now virtually complete at the 17,250-capacity venue that will be home to Brentford Football Club and London Irish.

In the interview, Walsh also advises how the two newly-installed LED screens totalling almost 11 x 6m have been installed, with “the highest resolution in UK stadia currently”.

In addition to the LED screens, there are six repeater screens on the west side and six on the east, 2m x 1m for fans at the very back, plus a brand new, state-of-the-art sound system from Bose. As Walsh was proud to advise:

We are the first new build stadium to have this system from Bose!

Walsh also confirms that the General Admission (GA) areas are now pretty much complete, with the taps going in for draft beer. Automatic turnstiles are being installed, half-height for home supporters and full-height for away supporters, allowing for entry via barcodes, mobile tickets and season cards, with a digital display welcoming people.

He also advises that the hospitality lounges are taking shape, with flooring, shutters and countertops all in, ready for the furniture to top them off. 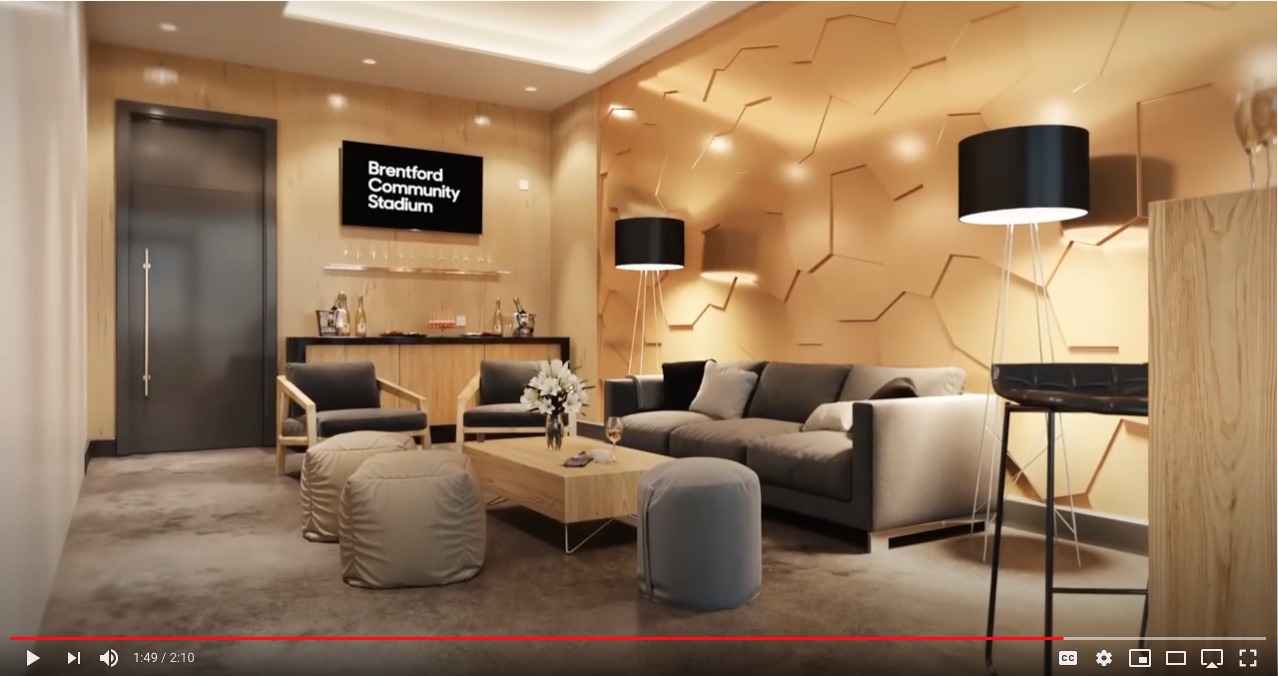 Including Premium Seats, more than 7,000 supporters have secured their place at Brentford’s new stadium. With the Reservation Centre currently closed due to Covid-19, sales of Premium Seats and Season Tickets continue, with supporters able to purchase their seats via phone appointments

Walsh explains too about the pitch, which benefits from a Desso GrassMaster fibre-stitched system; a proven dual sport pitch, the same system as at Wembley Stadium. It is 95% grass seed, 5% fibre, with the fibre providing stability, durability and performance levels, as Walsh advises.

The pitch is bigger than Griffin Park, being 109m x 70m, in accordance with Premier League requirements, with a metre either side of the touchline and behind the goal mouths of natural grass.

Walsh confirms too that test events will be conducted once the COVID-19 crisis over, as per the English Football League’s requirements, which will finally give supporters the “wow factor”.

Brentford Community Stadium is one of the most significant and exciting developments in the history of SkyBet Championship side, Brentford Football Club. The cornerstone of its long-term vision, the new stadium will help ensure a sustainable future for the Club. Situated next to Kew Bridge station, less than a mile away from Griffin Park, it’s much more than just a stadium for professional football, as upon completion, it will also become ‘home’ to London Irish. In addition, it is at the heart of plans to regenerate the area.

Capable of hosting 17,250 spectators, which includes 2,930 Premium Seats, the new stadium – designed by AFL Architects – will allow for the growth of support and the ability to realise an important new revenue stream. Supporters will have a stadium that reflects their ambitions and passion for the future of Brentford FC, and London Irish can finally return to their home turf. Brentford Community Stadium has also been confirmed as a host venue for the UEFA Women’s European Championship in 2021.

For more information, head to newstadium.brentfordfc.com

ALSD International, Europe’s leading event for the Premium Seat & Sports Hospitality sector being held at Liverpool FC’s iconic Anfield Stadium this October 12-13, will include a conference examining how to increase revenue through new builds, renovations & service expansions, and how to recoup lost revenue due to COVID-19. The high-level event will also feature an exhibition hall showcasing the latest products, services & solutions, plus behind-the-scenes tours of Anfield, Goodison Park and M&S Bank Arena, and numerous networking events ensuring optimised opportunities to knowledge-share and do business.