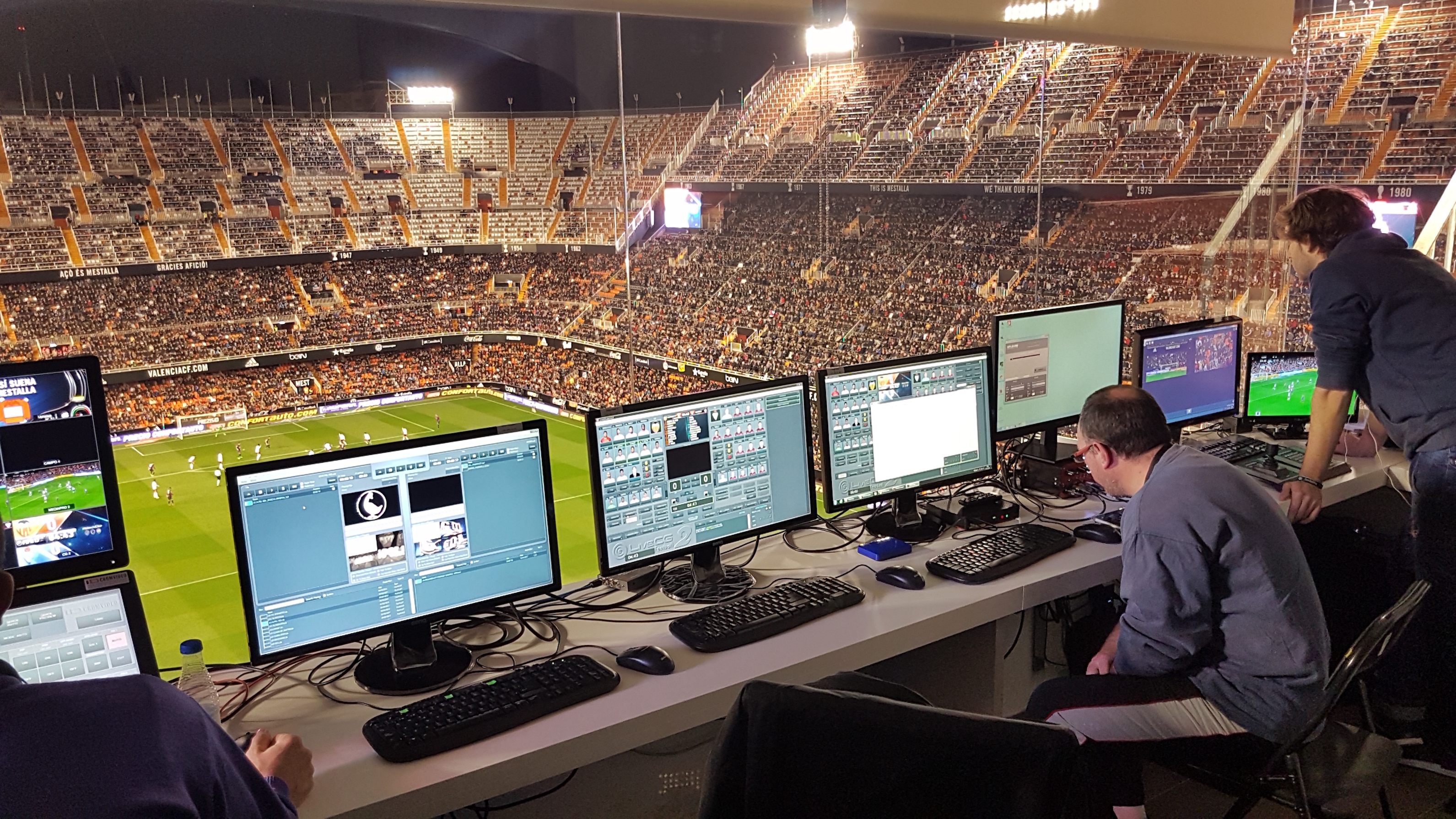 Something is changing in LaLiga venues. These mythical spaces have always been inspiring in terms of the game but until recently there was little or no regard to catching fan’s attention through AV technology; all that was displayed was simply the minutes and results. That is until now, as Yellow Bricks CEO, Juan Manuel Pancorbo, explains.

Today, LaLiga is going through an authentic revolution. There are new giant video scoreboards, 360-degree LED rings, interactive apps, 3D content… What is the reason for this? Step forward an ambitious small young company from the sunny Spanish city of Málaga, with experience in the NBA, Yellow Bricks.

From the funny Mestalla they have conquered in a few years almost half of the LaLiga stadiums, including the Wanda Metropolitano and its spectacular pre-game show. And they keep growing.

Juan Manuel Pancorbo, Yellow Bricks CEO, is able to share with Sport Venue Business the making of this revolution.

Yellow Bricks has succeeded in settling into almost half of the LaLiga football stadiums in a very short space of time. How do you explain this fast growth?

Well, some years ago we opted for translating the ways of doing shows on the screens of the sport stadiums in the USA to the Spanish league, this being with an attractive visual style and applying a trend that came to stay. It is a continuous request in the current football stadiums. The stadiums are upgraded and the clubs are in need of content and an operative solution to enliven video scoreboards. As the clubs have been becoming modernised, many have opted for the solution we offer, consolidating ourselves among LaLiga teams.

How was Yellow Bricks born and how has it been transformed into what currently is?

Yellow Bricks comes from basketball. Since 2006 we have been applying this show model. Seven years ago, we thought we could introduce our way of working in the world of football. It was hard at first. Clubs were not aware of the importance of giving a modern image to their stadiums, offering information to fans and giving them the possibility to interact and providing clubs with a source of extra income, for the world of sports sponsorship was changing.

Our first football club was Granada CF. Teams of the league liked our work and since that moment we have not stopped growing: then came Levante UD, Sevilla FC, Betis, Valencia CF, Atlético de Madrid, Málaga CF, RC Celta de Vigo and Real Valladolid. We have provided them all with a four-way solution that is content-related, operative, technological and with respect of raising income.

We are still making basketball. For almost 14 years we have been doing so and we have also established ourselves in the ACB league as a point of reference. 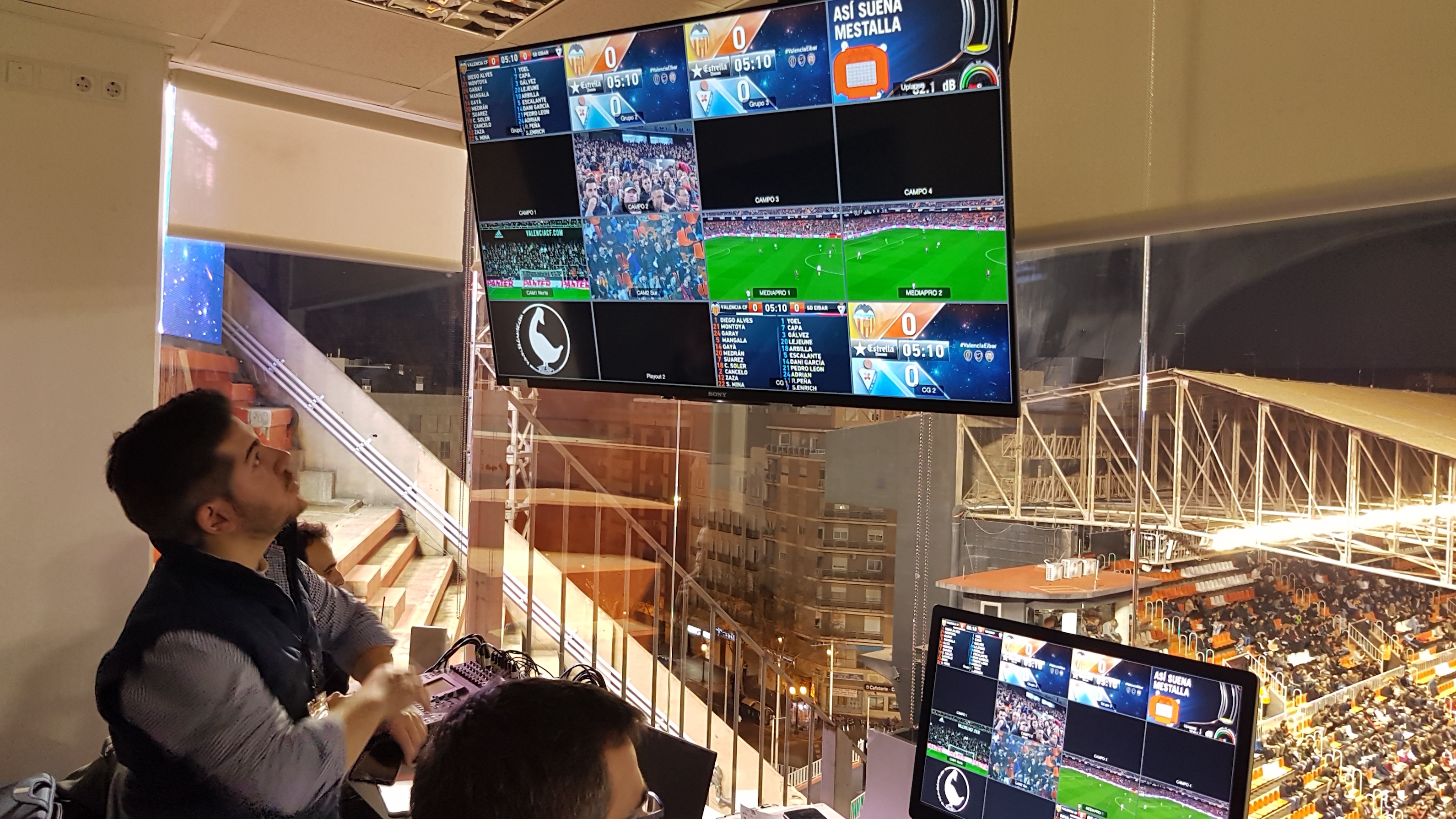 The Wanda Metropolitano stadium is internationally admired. What role did Yellow Bricks play in the technological conception of its screens and the well-known 360º ribbon board?

Well, almost always, it is the case that we end up working with a team coinciding with a technological improvement in a stadium. It has always been this way, because we are considered subject matter experts. We give advice and we adapt ourselves to each club’s needs. The feeling is that with us, the video scoreboards will have good content, with a personalised technological application; this is how we have gained the trust of our customers.

In the Wanda Metropolitano, we have made the most of a 360º screen but treated it as if it was a standard screen. We designed a coordinate system to locate the contents where we wanted, which allowed us to quickly and dramatically translate the design of events with flexibility.

What is the current role of Yellow Bricks in the Wanda Metropolitano on game days?

Everything is coherent to the spectator and the synchronisation ensures none of the detail of the information is lost, being able at the same time to enjoy the visual spectacle. We also carry out the operation of the content, so the club knows that we coordinate the graphic elements, we design them, adapt them and take responsibility for the live operation.

Do you offer all the Spanish clubs the same type of service?

We do everything on the same basis; as in we provide a solution of match content as a base. But all clubs keep incorporating fan engagement actions in their timings, because partners request it. Many times, it is us who encourage clubs to add events for the participation of the audience, so that what appears on the screens is a combination of information, entertainment, participation and commercial action. Except for Celta de Vigo, Yellow Bricks is responsible for all the operation of video scoreboards and their content. But several clubs have already requested that we create pieces for other media and RSS. We also made and designed the whole interactive museum of Sevilla FC. We always keep one hand on technology and the other on content.

It seems that the concept of football as a sporting spectacle has been changing over the last few seasons. To what extent do you consider yourselves promoters of these changes?

Well, without fear of error, our company has pioneered these changes. The stadiums that traditionally had video scoreboards only offered the minutes and results. We provide the clubs with a different and personalised visual style, with every sign of identity carefully treated, the possibility of permanent actions with cameras and the incorporation of brands in everything that involves the show.

In addition to football clubs, you have worked with ACB teams, federations and even the NBA. Does Yellow Brick have international expansion on their agenda?

Why not? Everything is very globalised. Having the seat in Málaga, we offer services to clubs more than 1,000km away. Nowadays distance coordination is feasible. We would love to export our success model to other leagues. 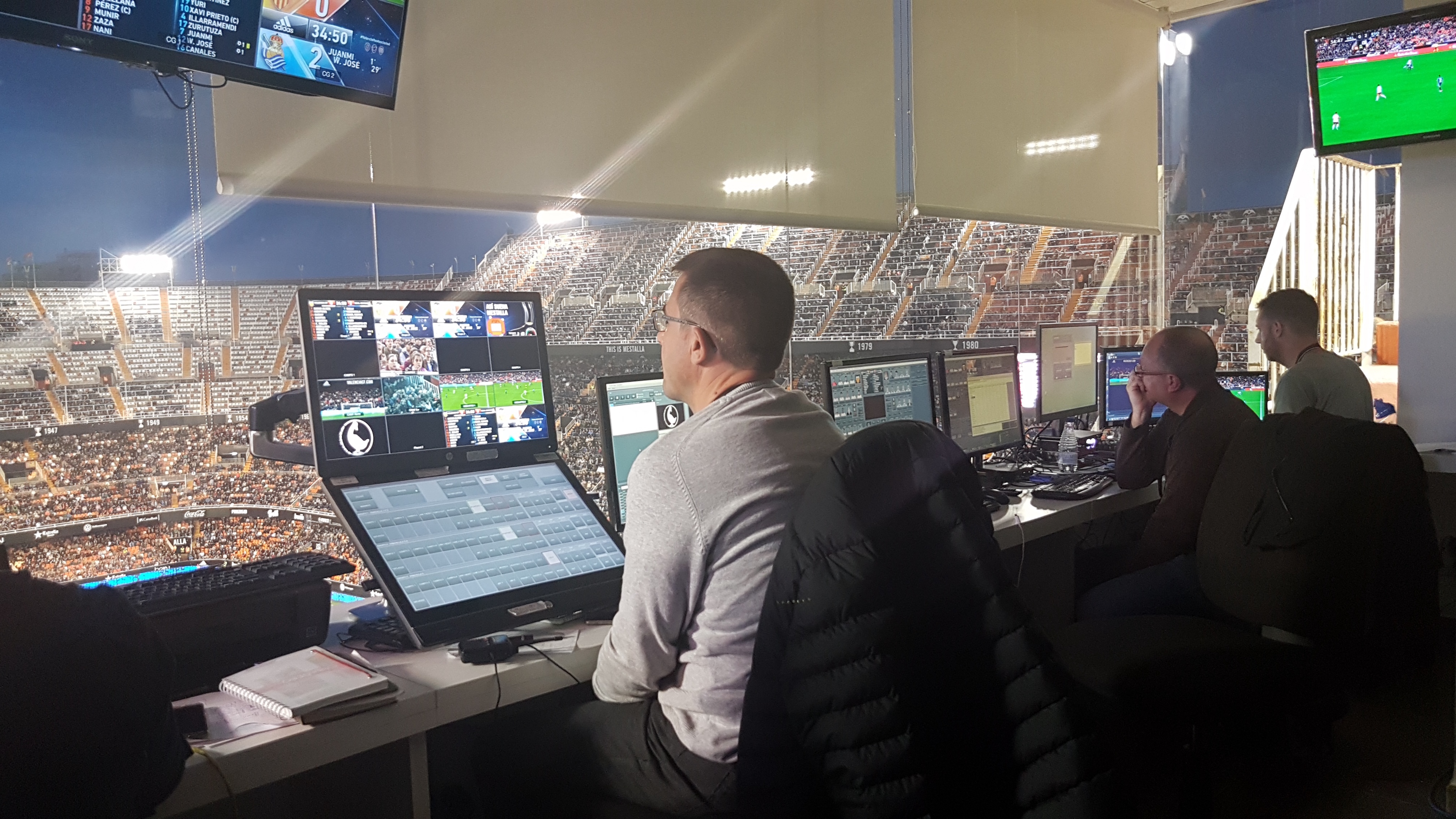 The coexistence of entertainment, information, interactivity and promotions is the key to making giant LED screens and ribbon boards attractive and thus make it possible to monetise them 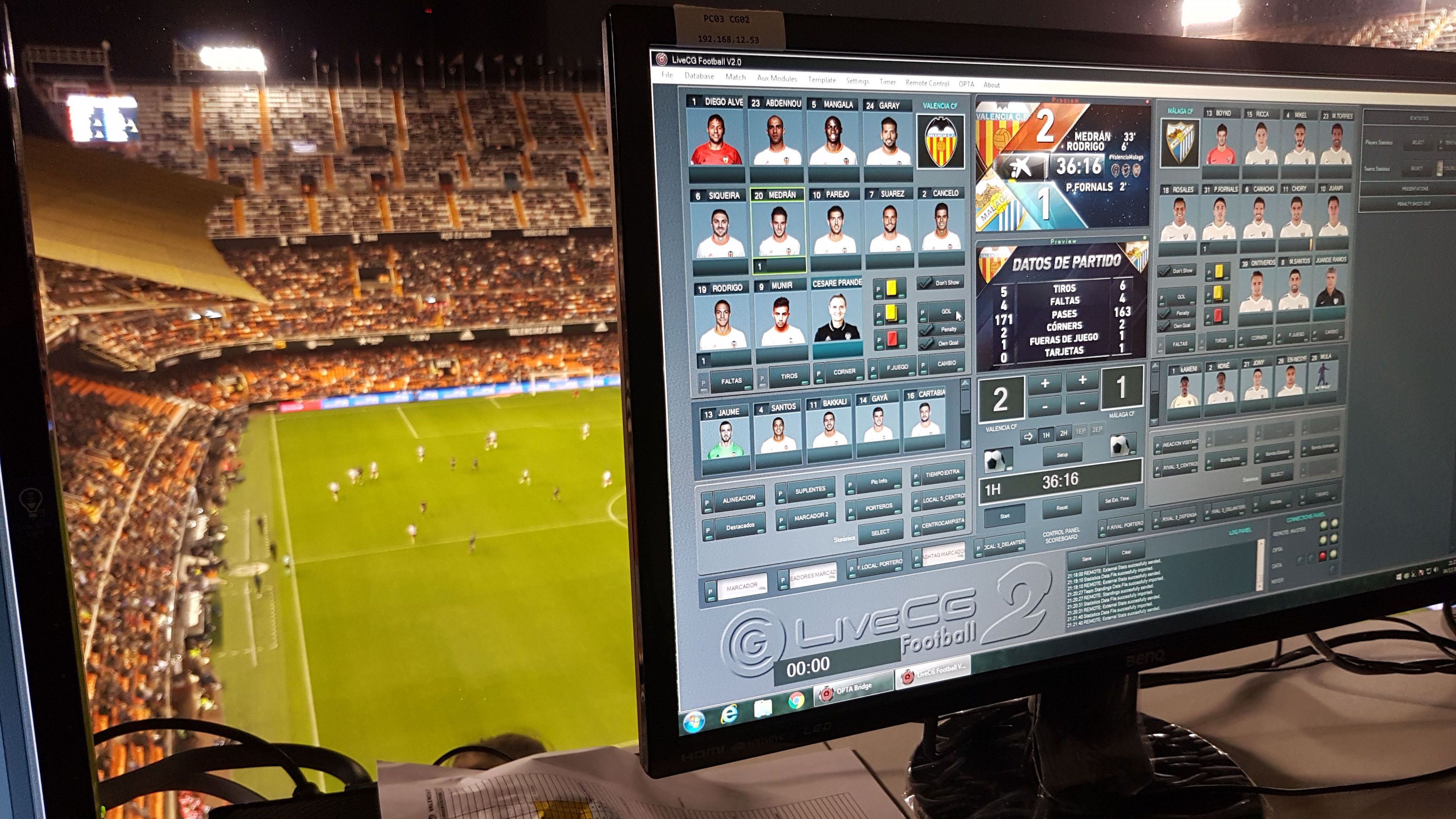 Everyone speaks of the importance of the fan engagement. Can fan loyalty be achieved through the screens of the stadiums?

Fans are very demanding. We compete directly against the mobile phone. And we offer fun, information and entertainment. The spectators request content. A giant video scoreboard cannot be treated like an advertising screen or a big television. Everything has its code, and the audience wants to interact. Fans request it as well as the quality of the lawn or the colour of the stands. We always say that our mission is to get the spectator to have a good time, should the team win or lose…

Can the audio-visual spectacle of the stadium be monetised?

Totally. Brands have noticed that an advertising billboard is obsolete, that an advertising spot is a television thing, and that the spectators do watch video scoreboards. During the two hours that the public remains seated, a multitude of content can be offered, and brands want to gain more prominence. Moreover, the audience is very captive and has a very specific target, and it is inevitable that the message does not reach the viewer through the giant screens. But we insist that it cannot just be a strictly advertising medium. The coexistence of entertainment, information, interactivity and promotions is the key to make it attractive and thus monetise it.

Where is the audio-visual technology of stadiums heading to? It seems that the Real Madrid is going to build one of the biggest 360 LEDs in the world…

Videoboard systems are increasingly acceptable for implementation. There are already perimeter ribbon boards and LED TVs. Why not do the same but larger? It is already assumable, both economically and technologically. There are very good examples in US stadiums, as well as in Europe, such as the Krasnodar with huge screens where this is as protagonist as the rest.

The spectacular nature it brings to the stadiums has already become a request. Many clubs have recently invested in big screens, but not of considerable size. This investment is already outdated, and we have just begun. Economically and as an infrastructure it is possible to add in the stadiums that plus of showiness that turns a match experience into a true one. It is still necessary to bet more on it, otherwise there will be a great experiential difference between one stadium and another. 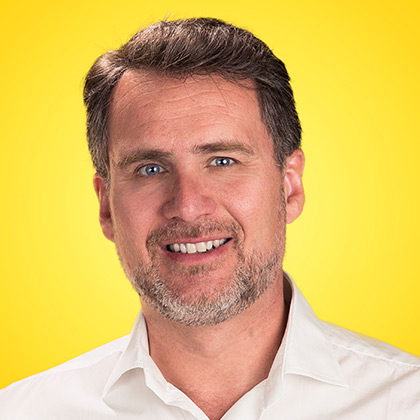