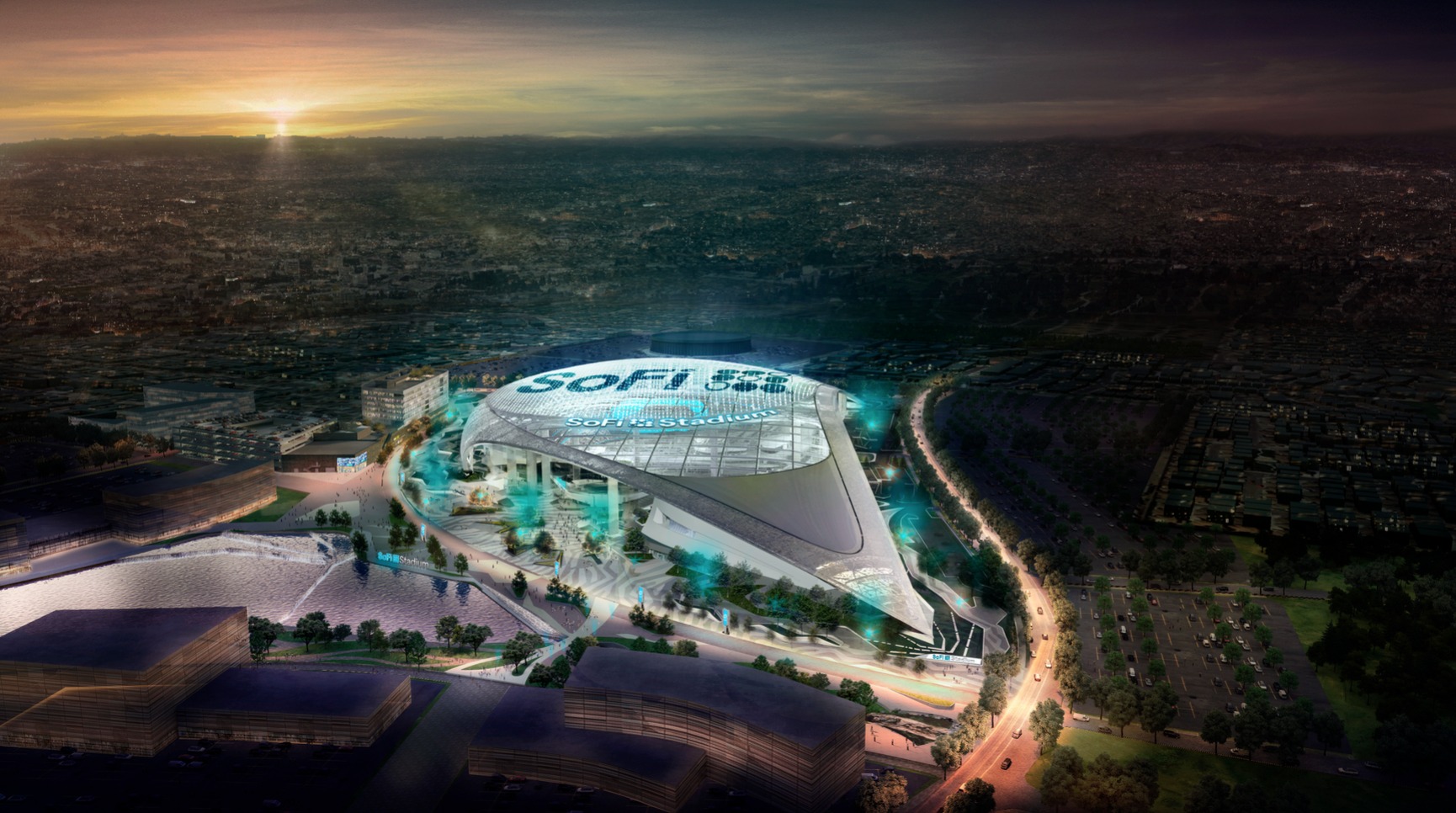 LA Stadium and Entertainment District at Hollywood Park (Hollywood Park) and SoFi are partnering in a 20-year agreement that makes the digital personal finance company the exclusive naming rights partner of the new SoFi Stadium, the future home of the Los Angeles Chargers and the Los Angeles Rams.

Opening summer 2020, SoFi Stadium is the centrepiece of Hollywood Park, a 298-acre world-class sports and entertainment destination being developed by Los Angeles Rams Owner/Chairman E. Stanley Kroenke. SoFi Stadium will hold year-round sports and entertainment events and will be the host of Super Bowl LVI in 2022, the College Football National Championship game in 2023, and the Opening and Closing Ceremonies of the 2028 Summer Olympic & Paralympic Games.

We’re thrilled to be introducing SoFi Stadium to the world, through our partnership with Hollywood Park. This is a giant leap toward achieving our company’s mission of helping people get their money right by reaching our members where they are. The partnership with this transformative project taking shape under Stan Kroenke’s leadership is the perfect opportunity to drive awareness and trust in the SoFi brand as we continue to grow and reach members on a national level.

It would be impossible to build a stadium and entertainment district of this magnitude without incredible and innovative partners who share our ambitions for Los Angeles, our fans worldwide and the National Football League. Since breaking ground at Hollywood Park, more than 12,000 people have worked side-by-side on this project, and we are proud to now have SoFi join us on this journey as we prepare to open in the summer of 2020.

From our first meeting with Anthony Noto and his team, it was clear that SoFi wants to transform not only the financial industry but also the lives of its members. SoFi has a deep appreciation of the aspirations of its members – quality education, home ownership and achieve their ambitions. They are helping millions of people achieve their dreams and helping us realize our own promise at SoFi Stadium.

Customer service and the fan experience is tantamount to everything we’ll do at SoFi Stadium. It was critical for us to find a tech-focused partner who is on the cutting edge and genuinely understands the needs of all of our constituents and who challenges us to think in creative ways to make every visitor to SoFi Stadium and Hollywood Park feel special and at home. 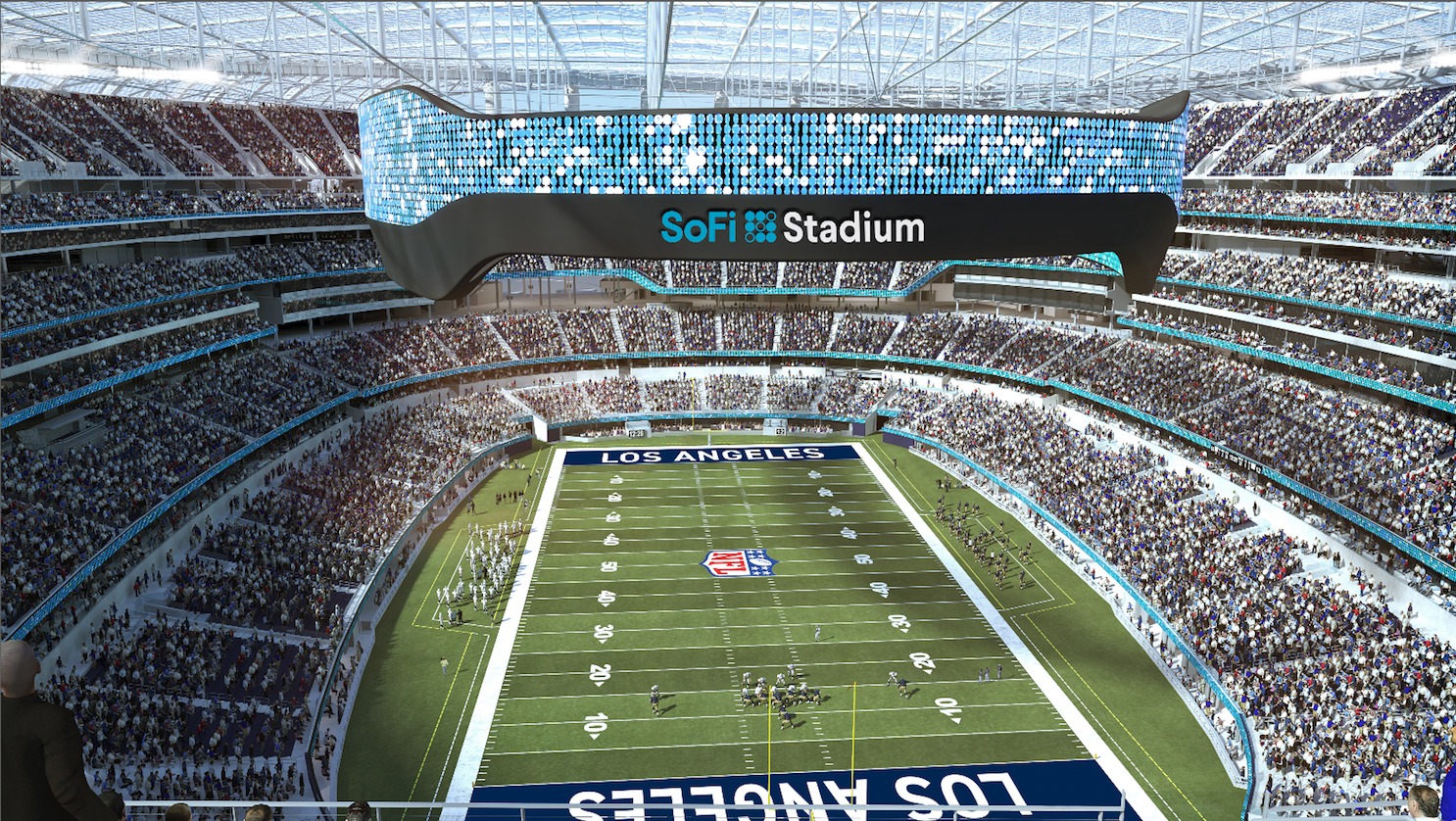 The 3.1 million square-foot SoFi Stadium is the largest stadium in the NFL, as well as the first indoor-outdoor stadium. It seats approximately 70,000, expandable up to 100,000, with more than 260 luxury suites and more than 13,000 premium seats

SoFi Stadium will have a seating capacity of approximately 70,000, expandable up to 100,000, with 260 luxury suites, more than 13,000 premium seats, and over three million square feet of usable space. A 27,000 square foot SoFi-branded VIP activation space inside the stadium will be utilised for special events, including a dedicated SoFi lounge for its members to access, one of the exclusive opportunities the company plans to offer members as part of this partnership.

SoFi’s commitment to disrupting the status quo within its own industry and becoming a leading innovator in financial services makes them the ideal naming rights partner for our new home. SoFi Stadium is reimagining how a stadium looks, feels and functions on gameday the same way SoFi is redefining access to financial tools for the next generation. We couldn’t be more excited to be aligned with a company as forward-thinking as SoFi, both as the naming rights partner for our new Hollywood Park home and as an official partner of the Los Angeles Chargers beginning in 2020.

We are working to deliver a fan-first stadium consistent with Mr. Kroenke’s dream to build a global sports and entertainment destination. SoFi Stadium will be a gathering place for the community, and we couldn’t have found a better partner to help us welcome the world when the building opens next summer.

SoFi Stadium is the first indoor-outdoor stadium to be constructed. Adjacent to the stadium and under the same roof canopy is a 6,000-seat performance venue and the 2.5-acre American Airlines Plaza. The performance venue will host a variety of events, including concerts, esports events, award shows, as well as community gatherings. Hollywood Park will feature more than 1.5 million square feet of retail and office space initially, 2,500 residences, a hotel, and more than 20 acres of parks.

In less than a year, the Rams will be running out of the tunnel into SoFi Stadium as people around the world see Mr. Kroenke’s creativity, dedication and hard work come to life through this game-changing building. We are thrilled to be teaming with SoFi on a partnership that will extend beyond the columns of the stadium, one that will combine our passions for inspiring people to realize their ambition and climb higher.

Community partnerships and programs will be announced in the coming months, leading up to the opening of the stadium.

Hollywood Park was represented by Legends Global Partnerships division, which sourced, negotiated and represented Hollywood Park in securing this wide-ranging partnership with SoFi. Financial terms of the agreement will not be disclosed. 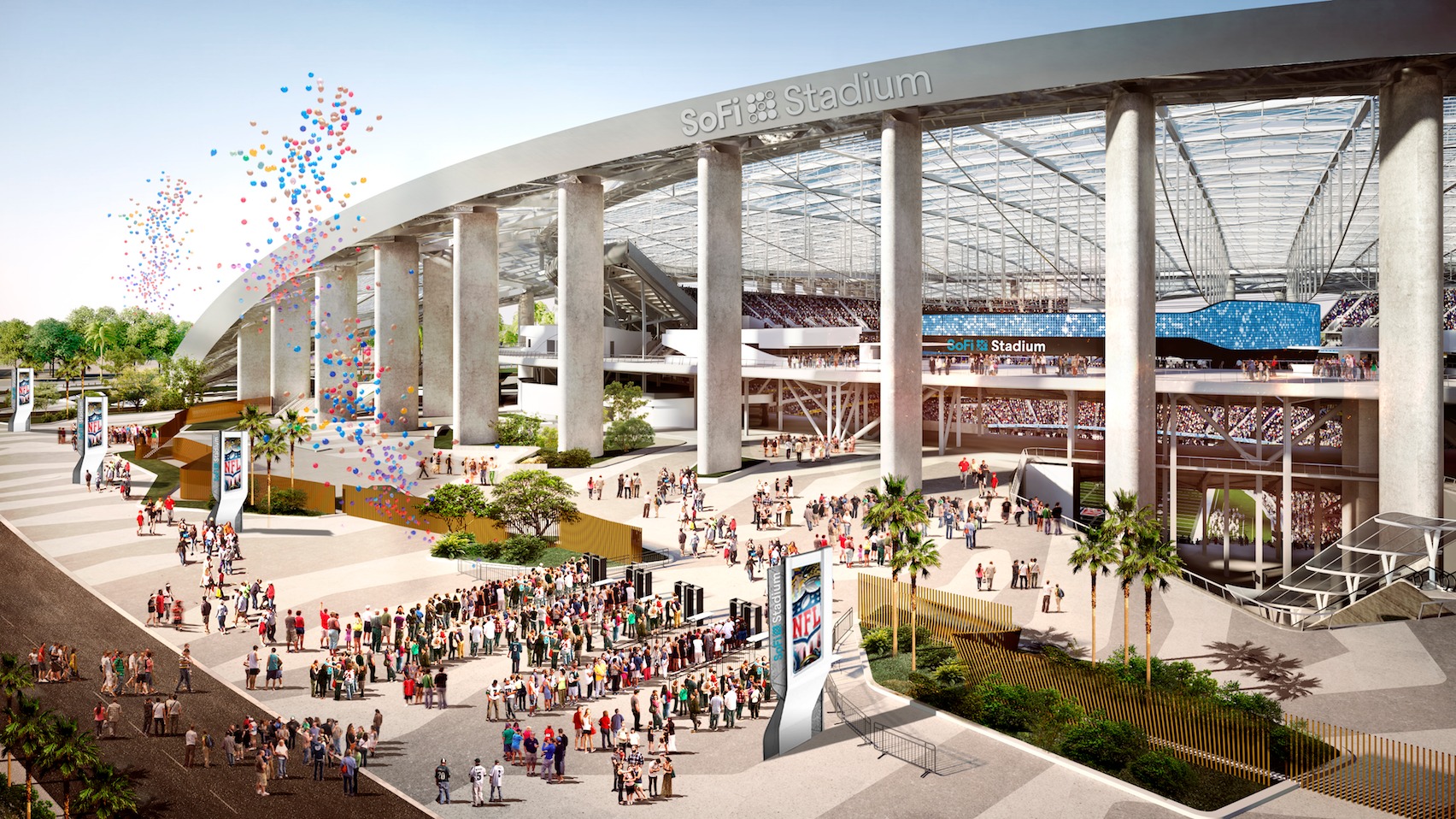 The 3.1 million square-foot SoFi Stadium is the largest stadium in the NFL, as well as the first indoor-outdoor stadium. It seats approximately 70,000, expandable up to 100,000, with more than 260 luxury suites and more than 13,000 premium seats.

SoFi Stadium has already secured Super Bowl LVI in 2022, the College Football National Championship Game in 2023, and the Opening and Closing Ceremonies of the Olympic Games in 2028.

Legends is just one of more than 150 entities confirmed to attend ALSD International – Europe’s one and only event dedicated to the Premium/VIP/Club Seat & Hospitality sector – being held at Croke Park Stadium in Dublin this October, 28-29. Some 50+ speakers, together with 40+ exhibitors/partners/sponsors from across Europe and North America, will be providing insights on how to increase revenues through new builds, renovations and service expansions, as well as via the latest developments in F&B and technology offerings.