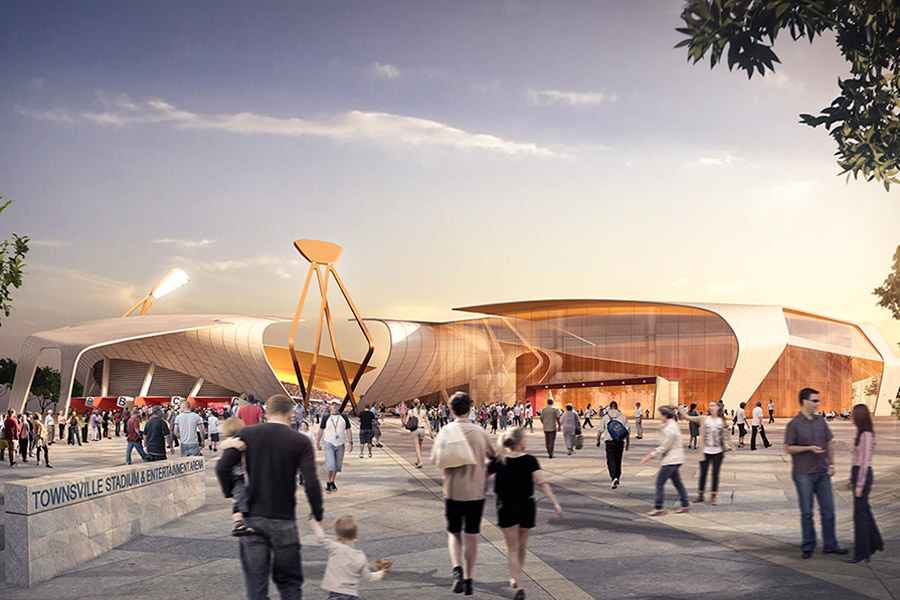 Construction is underway on the A$250m North Queensland Stadium with today’s turning of the first sod.

Three levels of government were on site for the official start to building works.

Queensland Premier, Annastacia Palaszczuk, said getting the project to this stage was also a clear demonstration of all the parties’ commitment to Townsville:

Breaking ground is an exciting time for the Townsville community as it will unlock hundreds of jobs and flow on benefits to the region during construction and beyond.

The Managing Contractor Watpac has worked hard to reach this significant milestone to ensure the project remains on track to deliver the Stadium on time for the 2020 NRL season.

Best of all, today we are seeing a further boost to local jobs with the award of the civil earthworks and roadworks trade package being award to local Townsville company Mendi Constructions.

One of my government’s key objectives has been to ensure this project delivers real benefits to local business and creates local jobs.

Federal Assistant Minister for Cities, Angus Taylor, said he was delighted to be in Townsville encouraging more investment through the City Deal:

Momentum is building around the job opportunities at the stadium. Today I’m exploring with Townsville leaders how we can get more local projects off the ground.

Fundamentally, the City Deal is a commitment to deliver for Townsville – more investment in local infrastructure, more contracts for local businesses and more jobs for local workers.

Townsville Mayor, Jenny Hill, said the turning of the first sod for the new stadium was a landmark moment for the city and the future of Townsville:

The start of construction of the stadium has lifted confidence and has begun to provide the economic stimulus we need to drive new jobs and investment opportunities for Townsville.

The stadium will continue to provide local employment during the construction.

Watpac has outlined a plan for more than 80 per cent of hours spent building the stadium to be by locals and at least 80 per cent of the value of the project to be spent on local subcontractors and suppliers.

For more information on the North Queensland Stadium visit: www.statedevelopment.qld.gov.au/nqs