After a four-year design and delivery phase, it is officially game time at Allianz Stadium. The redeveloped Allianz Stadium represents the latest in global sport architecture trends. A true multi-use rectangular stadium, it will host three sports – football, rugby league and rugby union.

The new home of the Sydney Roosters, NSW Waratahs and Sydney FC, the stadium is also ready-made for cultural and community events – gleaming as the trophy of Sydney’s unique inner-city precinct.

As the gates swing open for the first time, we not only celebrate the conclusion of years of hard work, but the beginning of a new chapter in Sydney’s sport and entertainment scene.

A ‘stadium in the park,’ Allianz Stadium enhances the significant recreation and sports precinct at Moore Park, creating new active spaces for patrons and the community, and reinforcing NSW’s ability to host international, national, and local events.

Nestled on the edge of the Sydney CBD between the open spaces of Moore Park and the heritage fabric of Paddington, the new Allianz Stadium provides a world-class football venue to this global city.

Hosting 33 sporting events and three concerts all within its opening year, will see Allianz Stadium set a global benchmark for multi-sport facilities. Designed by COX Architecture from a ‘fans-first’ perspective, the redeveloped 42,500 seat stadium redefines the game-day experience.

The goal of the redeveloped stadium has been to place the fan and players first, creating a home ground advantage for both.

Building on the legacy of the original stadium, the dynamic roof form provides cover to 100% of seats, simultaneously creating a signature for the stadium. A sculptural façade references technology, engineering, and art, with the materiality acknowledging its immediate surroundings of Moore Park with its mature fig trees, Kippax Lake, Paddington, and the iconic Sydney Cricket Ground. The façade shields internal areas and allows the stadium to blend in amongst the expansive parklands. 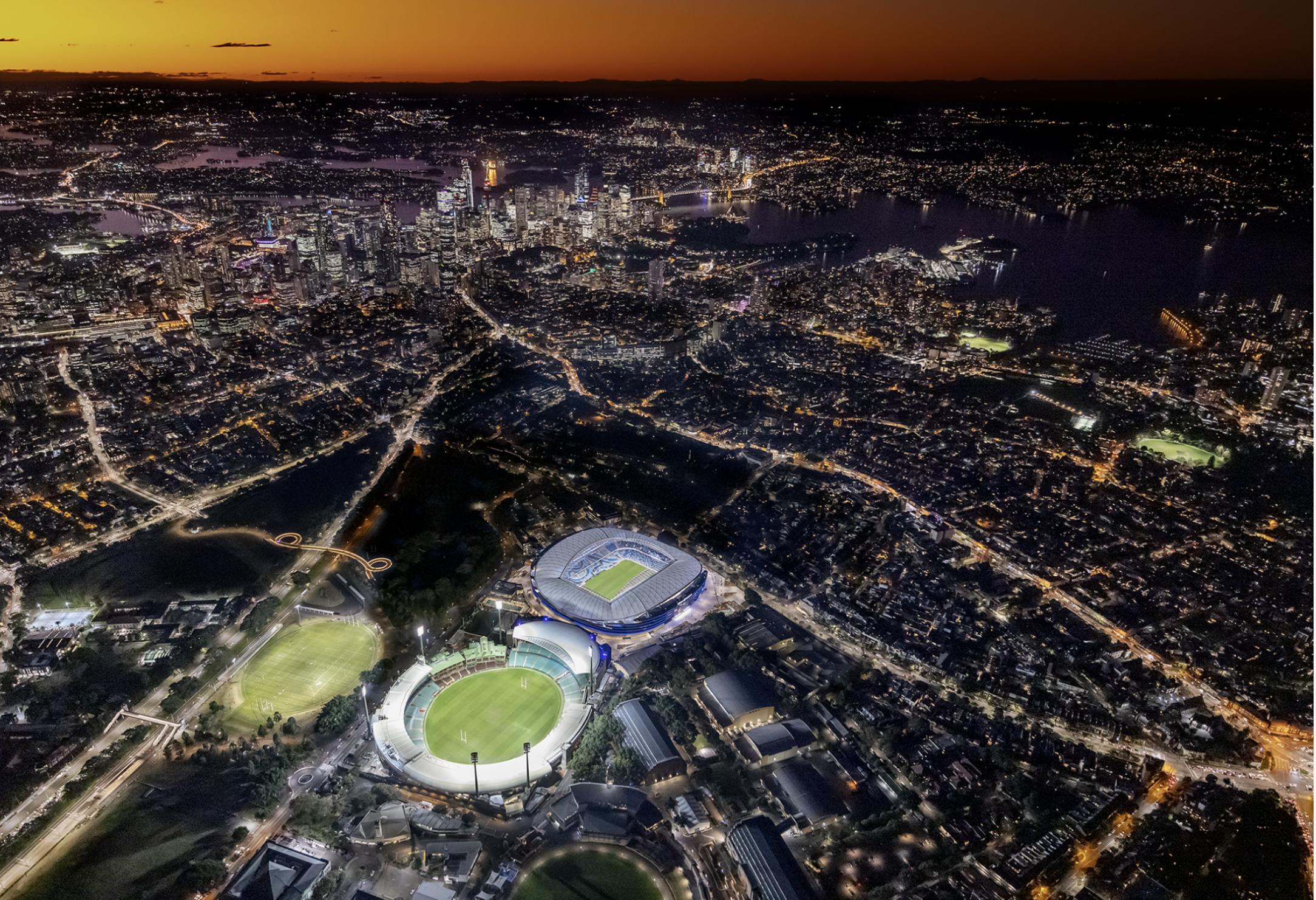 Careful analysis of preferred seating locations and designing the field of play to maximise proximity to the pitch results in Allianz Stadium providing a colosseum atmosphere that rivals iconic historic stadia in Europe.

The original Sydney Football Stadium represented a realisation that stadia could provide iconic architectural expression. Allianz Stadium builds on this with a unique diagrid roof form covering all seats and providing a distinct recognisable identity for the stadium.

SCG Trust Chairman, Tony Shepherd, says the stadium matches up with some of the best in the world. Speaking to the Sydney Morning Herald, he said:

I’ve been around the world looking at the best stadiums. This is right up there.

Indigenous artist Tony Albert is responsible for the design of the artwork that is displayed across the seats. The work, titled ‘Two Worlds Colliding’, looks to bring together two separate groups imagined as land and sea, like home and away teams playing one another.

This project could not have been delivered without the highly collaborative and interdisciplinary approach to design. COX worked closely with long-standing partners Arup and Aspect Studios, the delivery team that included Aurecon and Schlaich Bergermann Partner, led by design and construct contractor John Holland and funded by the NSW government.

The redeveloped Allianz Stadium rewards match-day and event patrons with a rich and engaging experience – inviting regular use by neighbouring residents, and attracting city-wide, year-round patronage of what is a remarkable public space.

…the 2022 event will feature a high-level conference, an exhibition showcasing industry-leading products & services, networking events and a behind-the-scenes tour of Tottenham Hotspur Stadium, powered by THFC and Levy UK + Ireland, plus a networking app to ensure engagement pre and post event.