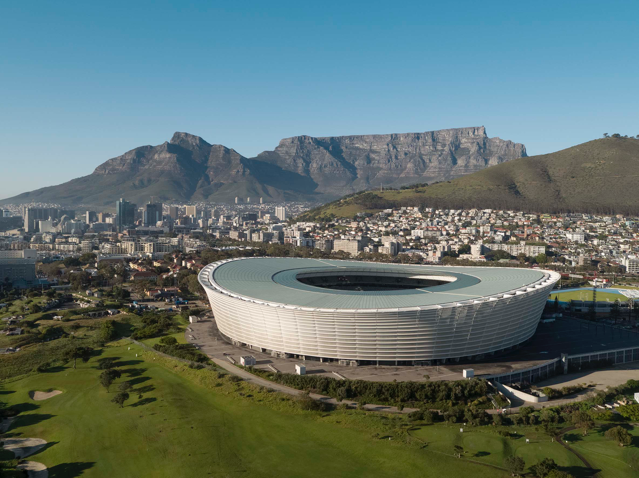 DHL Cape Town Stadium, a 62,000-seater stadium, built for the 2010 FIFA World Cup, has used challenges brought on by Covid-19 and Africa’s highly complex and volatile business and social environments, as an opportunity to redefine how public amenities, like sports stadium, should operate more sustainably, in a time of unprecedented challenge.

Africa requires creativity and ingenuity, especially during times of crisis like the Covid-19 pandemic. Where countries in Europe and North America have plenty of reserves to draw on, Africa’s economic circumstances mean that if businesses and organisations are to remain profitable, they need to come up with new ways of doing things.

Hard lockdowns in South Africa have taken a severe toll. A multitude of people have lost their jobs, with the country’s already high unemployment rate being inflated further.

Yet in Cape Town, South Africa’s tourism hub, two entities have bucked the trend by employing creative strategies that have not only allowed them to negotiate the Covid fallout, but enhance their future offerings.

During the period when Covid-19 was raging, Cape Town continued to rack up a host of international accolades. At the 28th annual World Travel Awards last year, the city was named Africa’s Leading City Destination, Table Mountain was honoured as Africa’s Leading Tourist Attraction and, despite not being able to host many festivals or events, Cape Town also took home the award for World’s Leading Festival and Event Destination.

Where others might have sat back waiting for the storm to pass, Cape Town Tourism adopted an innovative approach, focusing on domestic travellers to sustain the industry.

Our pocket-friendly campaign aimed to inspire South Africans and locals to get out and about in Cape Town, no matter how much or how little they have to spend.

Another standout performer has been Cape Town’s DHL Stadium, one of Africa’s premier sports and entertainment venues.

With the stadium already globally recognised as part of Cape Town’s breathtaking landscape, enjoying the backdrop of the iconic Table Mountain and Atlantic Ocean, it annually plays host to the Cape Town Sevens, one of the most popular events on the HSBC World Rugby Sevens Series calendar, as well as some of the world’s leading music artists.

The likes of U2, Ed Sheeran, One Direction, Michael Bublé, Foo Fighters, Red Hot Chilli Peppers and Lady Gaga have all played to capacity audiences at the stadium, while tennis star Roger Federer’s Match in Africa against Rafa Nadal at DHL Stadium in 2020 set a new world record for crowd attendance at a tennis match, with 51,954 people watching the two greats battling it out on court.

A year later in 2021, the stadium also hosted a total of five matches in the British & Irish Lions rugby tour of South Africa – an incredible achievement given the lockdown still in place in the country.

With Cape Town being a favoured location for international film shoots, the stadium has become sought after for its interesting angles, sets and backdrops. From the Stadium Bowl, pitch, tunnels and podium to the parking lot, forecourt and passages, it is cinematically versatile, and has already appeared in many commercial and full-length feature films.

Where DHL Stadium has truly stood out, however, is in the areas of innovation and sustainability.

The operating system ensures that all facility operations are centrally controlled and operated with automated monitoring and control to stadium systems. These include fire, CCTV, access control, air-conditioning, ventilation, plumbing and drainage, electrical, lifts and sprinklers.

The operating system accesses its own servers and incorporates graphical representation on a virtual platform, indicating respective stadium levels as per its built design. The systems consist of a wide range of network control units, data analytics and safety and security features.

Africa is a highly complex environment where maintaining stadiums sometimespresents a major challenge given limits on funding and resources. Stadiums on the continent also struggle to implement the use of renewable energy as a result of high global costs and countries’ dependence on fossil fuels.

Yet DHL Stadium is meeting these challenges by developing a comprehensive maintenance programme that protects the value of stadium assets through corrective and preventative maintenance while ensuring financial prudence, operational efficacy and environmental sustainability.

These programmes have given rise to a state-of-the-art intelligent building that is able to host a multitude of world-class events, whether they are sport, concert or corporate-based. Each aspect of the stadium meets the highest international standards, while the asset also recently finalised its

Environmental and Event Sustainability Policy directive and strategy, which aims to substantially reduce its carbon footprint and energy consumption in the next three years.

The Covid-compliant venue has also developed operational models that have allowed it to remain event-ready.

During the pandemic, it rolled out the use of a QR health ID code for stadium staff and specific events, while encouraging event organisers to ensure online ticketing solutions. To this end, DHL stadium boasts outstanding access capabilities thanks to its partnership with SKIDATA South Africa.

In 2020, the company introduced a host of new technologies, including “Touchless” with a “Wave” to obtain a parking ticket, a ticketless” Licence Plate Recognition (LPR) solution for access and egress to parking garages, and “Cashless” Ingenico Tap & Go and Chip & Pin devices installed on automatic payment machines that accept credit and debit card payments.

It also developed its “Scan to Pay” via a Mobile Smart Phone and the Masterpass App. These technologies have propelled DHL Stadium into the future, further confirming its status as one of the world’s great stadiums.

Now that the worst of Covid-19 has passed, DHL Stadium is looking forward to hosting a number of marquee events later this year.

In September, pop superstar Justin Bieber will take to the stage, the first big name international performer to do so since the start of the pandemic in March 2020.

Promoter Big Concerts says Covid-19 took an enormous toll on the live music industry, with artists having no opportunities to perform. However, with the South African government relaxing Covid regulations and ending the national state of disaster, Cape Town is looking forward to once again hosting the world’s biggest names.

Event operational plans are essential to making an event successful and memorable. The venue needs to be well maintained, service providers need to be experienced, and everyone needs to be focused on the fan experience.

DHL Stadium is perfect in this regard. It is a world-class venue in the most beautiful location with its breathtaking views, architecture, culture, amazing restaurants and first-class hospitality. DHL Stadium is also easily accessible to all attending an event. It offers wide-ranging facilities and services, and the core management team has remained with the venue since its inception.

Van Wyk added that pent-up demand is strong and several markets are reporting they have even improved on pre-pandemic levels:

The future is bright.

DHL Stadium boasts seating capacity of 62,000 and all home matches of DHL Stormers and DHL Western Province Rugby, as well as Cape Town City Football Club are played at the stadium.

This world-class venue, built for the 2010 FIFA World Cup, is globally recognised as part of Cape Town’s breathtaking landscape, enjoying the backdrop of Table Mountain and the magnificent Atlantic Ocean.

Beyond the Stadium Bowl, the 62,000-seater arena has hosted giants of the sporting and music world, including U2, Ed Sheeran, Foo Fighters, Red Hot Chilli Peppers and tennis legends Roger Federer and Rafa Nadal, among others. In September it will host pop superstar Justin Bieber, and in the same month the Rugby World Cup Sevens, with the HSBC 7s following in December. The Covid-compliant stadium’s incredible facilities are tailormade for star-studded occasions, high-end business events and private family functions.