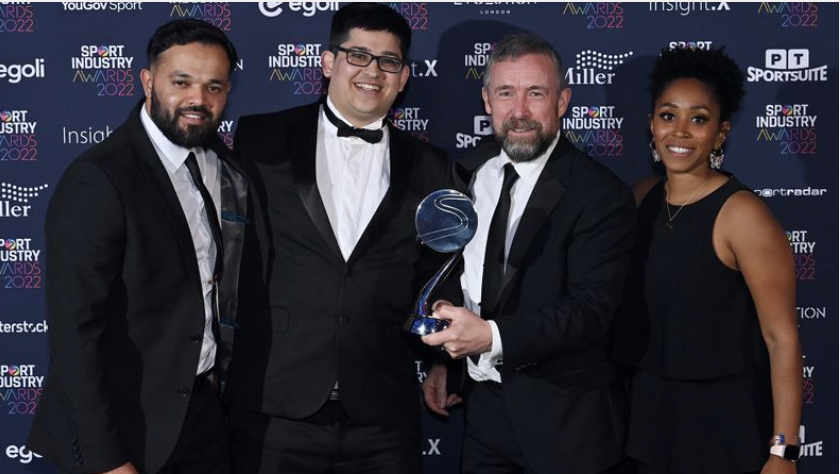 Wigan Athletic and partners Stadimax have been recognised for their commitment to Fan Engagement since Phoenix 2021 Limited became custodians of the Club in March 2021, as Latics received the Sport Industry Award for Fan Engagement.

Earlier this year, Wigan Athletic and Stadimax were named as finalists for the award alongside Cardiff City FC, Chelsea FC, Aston Martin, Heineken and Pepsi Co, with Latics’ nomination based on the #BELIEVE FansFund.

The #BELIEVE FansFund is a unique and unprecedented fan engagement initiative in English football, whereby supporters can directly influence the strength of the Club’s football operation through a monthly subscription, with 100% of subscriptions ring-fenced to improve football operations across the Academy, Sports Science and High Performance.

Over 1,600 Latics supporters have become #BELIEVE FansFund Founders in the past 12 months, with their support aiding the Club’s Academy facilities, including significant investment from the FansFund to Academy performance equipment at the Stadium Way facility.

Equally, Latics’ 2021/22 campaign consisted of 61 league and cup matches for Leam Richardson’s first team, with Latics’ manager stating the importance of recovery and regeneration in the teams’ success. To support this, specialist recovery facilities were installed at Christopher Park, and mobile cryogenic facilities were used immediately after matches in the latter stages of the 2021/22 campaign to aid players’ recovery between midweek and weekend fixtures – all funded by FansFund Founders.

The #BELIEVE FansFund has not just centred around additional financial support for football operations beyond the incredible support of Latics’ owners, though, as the FansFund has re-engaged supporters in their Club, especially those who cannot attend matches on a regular basis and perhaps those who felt like they weren’t tangibly involved by supporting from afar.

FansFund Founders from all over the world enjoyed Zoom calls with first team players and Club management staff, while exclusive prizes and competitions have seen FansFund Founders win money-can’t-buy experiences, including places on the 2021/22 Team Photo and the chance to meet the players before first team matches! Perhaps most notably, all #BELIEVE FansFund Founders will have their name on next season’s third shirt, as revealed by chairman Talal Al Hammad last year.

Sports Venue Business organises and delivers ALSD International, the leading event for the Premium Seat & Hospitality sector outside of North America, with a focus on optimising revenue through New Builds, Renovations & Service Expansions, on behalf of the ALSD (Association of Luxury Suite Directors)…

…the 2022 event will feature a high-level conference, an exhibition showcasing industry-leading products & services, networking events and a behind-the-scenes tour of Tottenham Hotspur Stadium, sponsored by THFC and Levy UK + Ireland.