The FA and UEFA have released the UEFA Women’s EURO 2022 Pre-tournament Impact Report, confirming it’s on track to be the biggest women’s European sport event in history.

The Host Cities are expecting 96,000 international visitors from 95 territories and there will be engagement from fans from all over the world as the international broadcast audience could reach over 250 million across more than 195 territories. Host cities will also see a positive socio-economic impact thanks to over 5,500 people taking part in the volunteer programme.

The report reveals ticket sales for the tournament are on track to double the attendance of the UEFA Women’s EURO 2017 in the Netherlands that welcomed just over 240,000 fans. 51% of football fans plan to attend or watch the games that will take place up and down the country across nine English cities in 10 stadiums.

Providing a platform for greater participation in the game and community engagement, the tournament also represents a huge opportunity to drive a further step change in women’s football in England. It aims to leave a lasting legacy by inspiring the next generation of players and fans, providing opportunities for more than 500,000 women and girls to participate and engage with football through focused efforts of legacy groups within each of the Host Cities, with many more additional opportunities nationally. 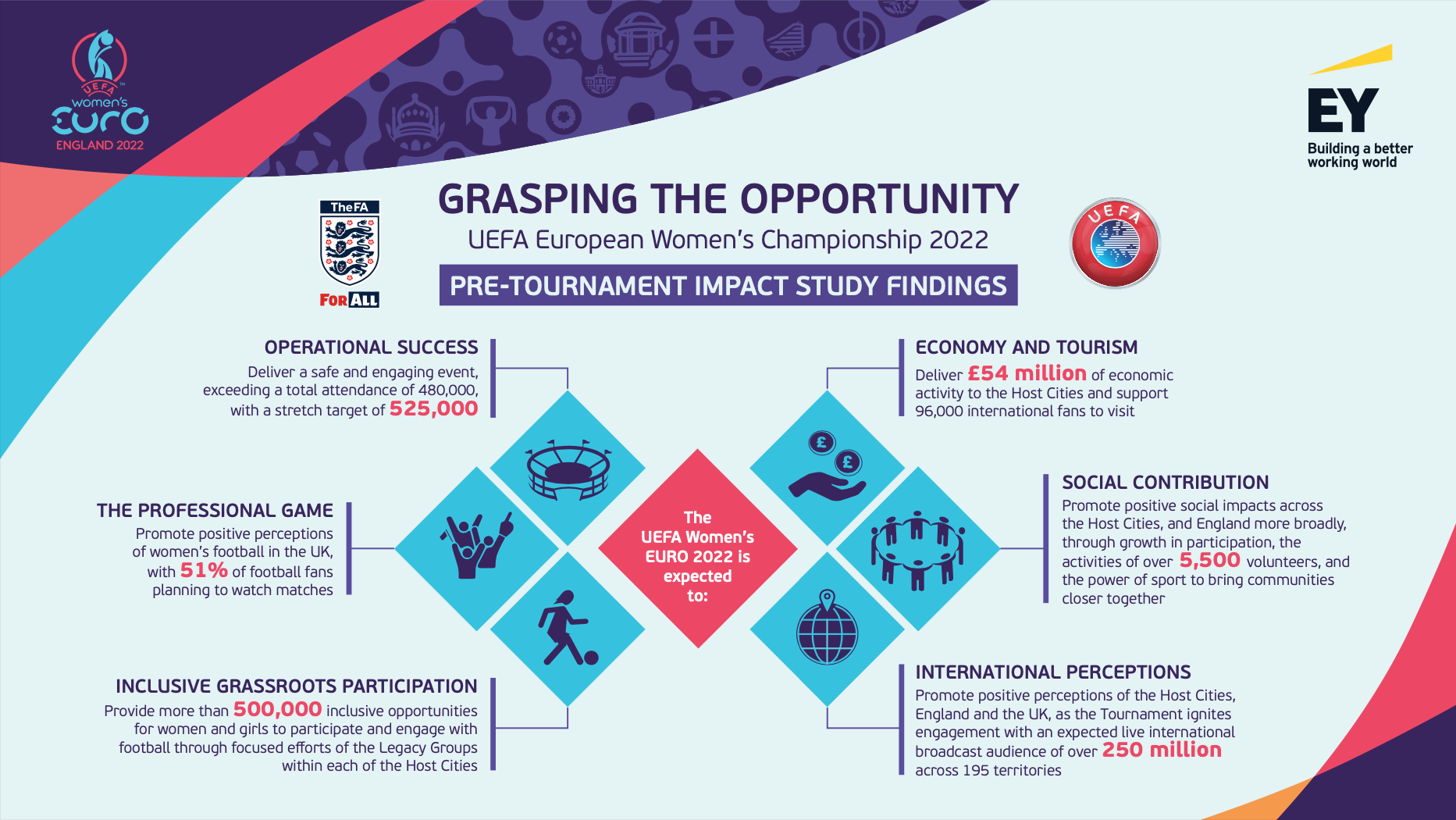 With less than 50 days to go until the Tournament gets underway, this report highlights what we can achieve with a continued focus on capitalising on the opportunities offered by UEFA Women’s EURO England 2022 and importantly how we can measure our success.

Our aim is twofold: to deliver a record-breaking tournament and to leave a tangible legacy to grow the women’s game. By inspiring fans at home and abroad, and by committing to provide playing opportunities to girls in every school and club across the country, I am confident we can deliver on both aims.

This pre-tournament report proves that the impact won’t stop with the final whistle at Wembley. UEFA Women’s EURO 2022 has a unique chance to be a catalyst for change locally, nationally, across Europe and beyond. The tournament and our collective ambition will positively impact local economies and tourism, people and communities and the global visibility of the women’s game, whilst providing valuable inspiration for the future.

EY will produce a ‘flash’ report that will be published in the autumn of 2022 following the tournament to provide an initial indication of the impacts achieved. Developments in participation and interest in women’s football will be monitored to inform the full post-event impact study, which will be produced in the summer of 2023.

Sports Venue Business organises and delivers ALSD International, the leading event for the Premium Seat & Hospitality sector outside of North America, with a focus on optimising revenue through New Builds, Renovations & Service Expansions, on behalf of the ALSD (Association of Luxury Suite Directors)…

…the 2022 event will feature a high-level conference, an exhibition showcasing industry-leading products & services, networking events and a behind-the-scenes tour of Tottenham Hotspur Stadium, sponsored by THFC and Levy UK + Ireland.