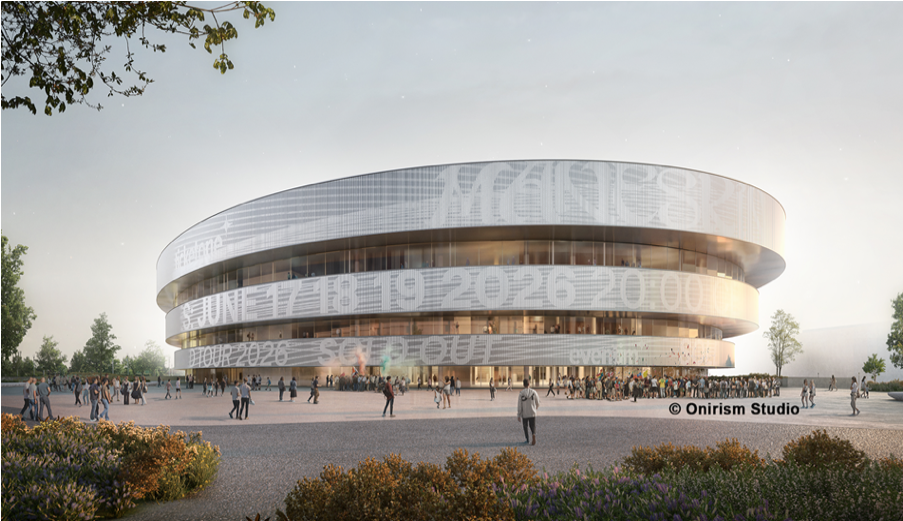 During the launch, German event giant CTS Eventim presented the design of the new flexible 16,000-seat capacity arena, one of the country’s largest multipurpose spaces, which will play host to the city’s 2026 Winter Olympics and will then be used for large concerts and festivals.

Designed by Arup and David Chipperfield Architects’ Berlin office, the arena is wrapped in three stacked shimmering aluminium rings. Connected by light, transparent glass bands, the different heights appear to float during the day, coming alive at night with LED strips to showcase the range of sports and cultural events.

Located on the southern corner of the Milano Santa Giulia site, over the public piazza, the arena appears to float on a plinth. A wide flight of steps will connect the arena with the surrounding square, with extensive green spaces and trees creating a welcoming public space for local residents and spectators alike.

Sustainability is a key driving force in this arena design. As well as working on the architecture, Arup’s sustainability and design specialists created a plan to minimise carbon emissions and resource consumption to design a climate-resilient development.

Inspired by a zero-carbon design approach, the arena joins a growing number of large-scale venues powered by solar energy, with around 4,000 south-facing photovoltaic panels installed on the roof to meet the bulk of the arena’s energy consumption needs.

The arena is part of the wider Milano Santa Giulia urban regeneration scheme to the south-east of the city, designed to include a mix of residential, commercial, retail and educational facilities anchored by a large park.

Arup’s architectural design team has also worked closely with CTS Eventim to optimise the existing masterplan, resulting in the creation of a public Piazza, which creates continuity with the arena, promoting the integration of public space and architecture.

Aligned with circular economy principles, the arena’s design goes beyond carbon reduction to consider the entire lifecycle of the building, prioritising modular and off-site components to reduce site waste and create opportunities for future disassembly and re-use.

Inside, the arena will feature two covered tiers above the stalls, as well as sky boxes. All seats are accessible via spacious lobbies on all levels, as are catering and service facilities.

The team has used digital tools to develop the arena, harnessing parametric design modelling tools to arrive at the arena’s final bowl design, which optimises views for every spectator in the building.