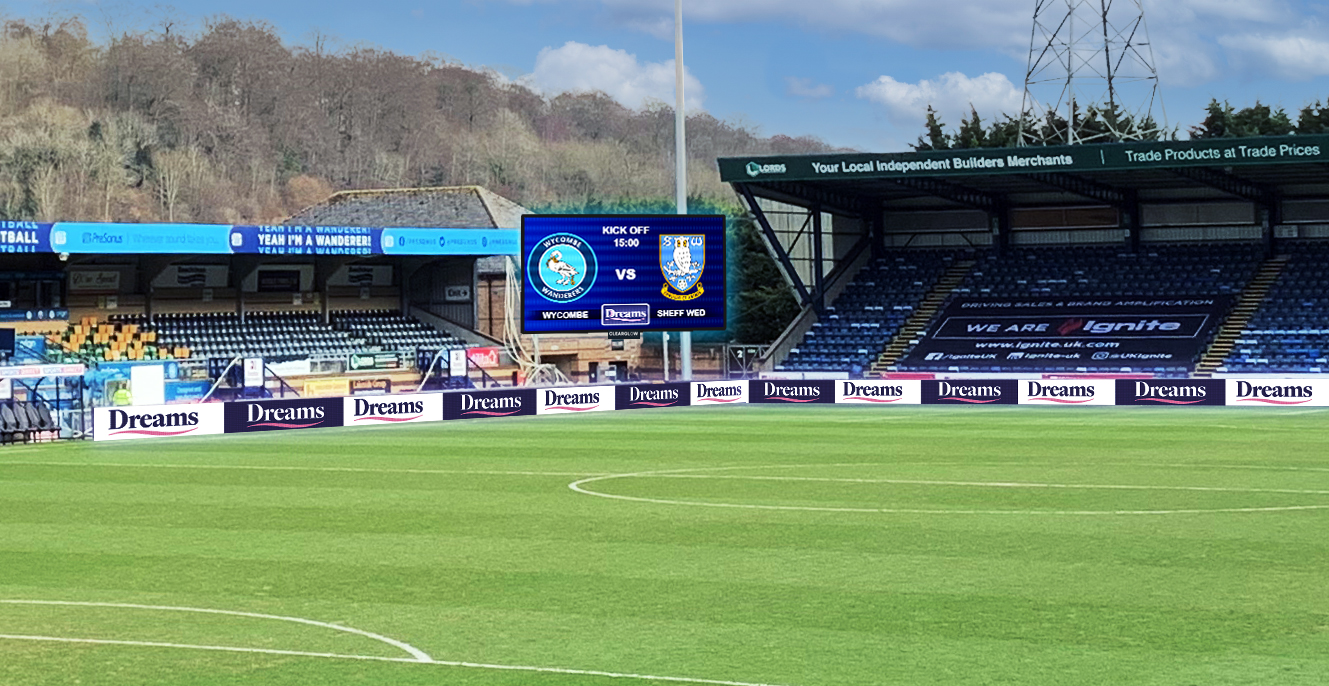 The new 42sqm LED screen will provide a huge platform through which the club will be able to inform and entertain fans on a much larger scale than the previous screen it replaces. The high-resolution perimeter system will create a powerful channel through which to activate brand partnerships and drive revenue.

Since acquiring ownership of Wycombe Wanderers in 2020, club chairman and chief executive, Rob Couhig, has been determined to invest in the club and reward fan’s loyalty with an incredible matchday experience. The new LED screen and perimeter system will play a large part in helping the club to achieve those ambitions.

Clearglow Sport will work closely with Wycombe Wanderers to create an outstanding fan engagement platform to rival that of any stadium. As well as being able to deliver live match content, the club will be able to use the screen to keep fans up to date with match stats, team line ups, social media content and much more.

The new perimeter system will also enhance the stadium, offering a hugely powerful platform for the club’s commercial partners to reach fans and the wider TV viewing audience. The system, which will span three sides of the pitch, will measure an impressive 900mm high, making it one of the largest in the EFL.

Clearglow Sport will install their industry leading technology at Adams Park in collaboration with global leaders in LED manufacturing, Unilumin, whose pitchside perimeter LED system will also be installed at Manchester City’s Etihad Stadium this season.

We can’t wait to welcome fans back into Adams Park, and we’re excited to be able to enhance the matchday experience for our incredible supporters. We’ve invested in new technology throughout the stadium, with the aim of bringing fans closer to the action and offer a strong platform for our commercial partners.

After a thorough review of the market, we’re delighted to appoint Clearglow Sport to help us deliver our vision. The team at Clearglow Sport have an incredible record in delivering large scale stadium LED projects which, combined with their industry leading technology, and powerful content management solutions, made them the ideal choice to help us grow.

The screen and perimeter system will be installed by Clearglow Sport over the summer, ready for the planned return of fans to Adams Park at the start of the 2021/22 season.

We are incredibly excited to be working with Wycombe Wanderers, who have demonstrated huge ambition throughout the planning of this project. By combining a giant stadium LED screen with our high impact perimeter technology, Wycombe Wanderers will be able to create an incredibly powerful platform for fans and sponsors.

It has always been our ambition to make high quality, revenue generating, LED platforms accessible to clubs of all sizes. No club should have to compromise on quality because of the league in which they are playing, and we’re delighted to be able to deliver the same industry leading LED display solutions for Wycombe Wanderers as used by some of the very top teams across Europe.