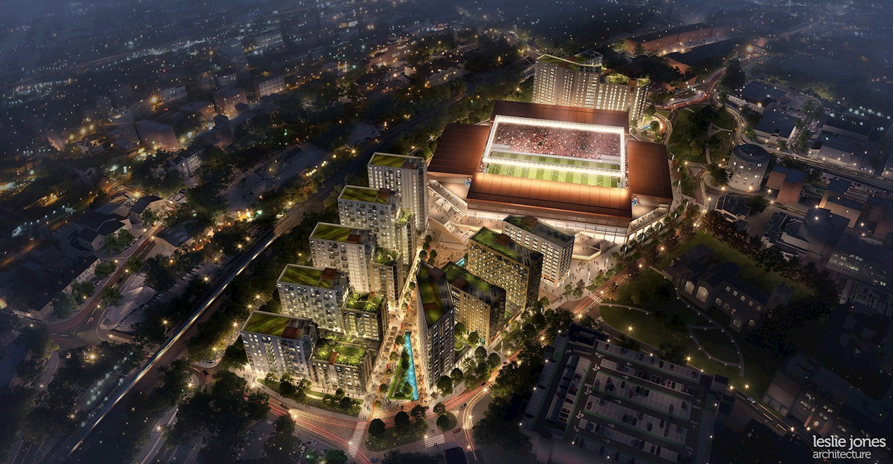 Further to the update provided by Luton Town Football Club earlier this month, with two new images of the developments at Power Court and Newlands Park, the EFL Sky Bet Championship club has now shared the image above of its planned new stadium lit up on a match night.

The sight of the club’s new home, from Leslie Jones Architecture, is something fans will be looking forward to with eager anticipation ahead of the proposed move-in date of 2024.

2020 Developments Chief Operations Officer, Mike Moran, was on BBC Three Counties Radio discussing the latest plans to be submitted to Luton Council, which went public on February 17, 2021. You can listen to what Mike had to say by clicking HERE and scrolling to 1:51:00 – with Save Our Town’s Nigel Green talking to Andy Collins afterwards.

Luton Town and 2020 Developments have provided the following update on the latest plans and timescales for construction of Power Court and Newlands Park:

Both sites are owned 100% freehold by 2020 Developments (Luton) Ltd having been acquired in various stages between 2015 and 2018. Outline planning consent received for both sites during 2019.

Structural changes in the way the UK consumer shops, works and plays has required a revision to scheme plans originally conceived in 2015/2016 prior to submission of original planning applications. The Coronavirus pandemic has generally served to accelerate these structural changes. Our challenge has been to ensure our vision for both sites remains viable and deliverable.

Several changes were already being considered by the development team ahead of any impact from Covid-19. This is standard for any development between early stages of the process.

The English Football League side’s core objective remains to deliver a truly great new stadium and home for Luton Town FC. The intended capacity remains set at 23,000 (with potentially an initial cap at 17,500 for transport assessment reasons) and a target opening date in 2024.

By taking control of its own future the club can ensure the new stadium is not burdened by external debt. Just as importantly we can help to shape a vision that is transformative for our local community and delivers real and tangible benefits for the people of Luton. 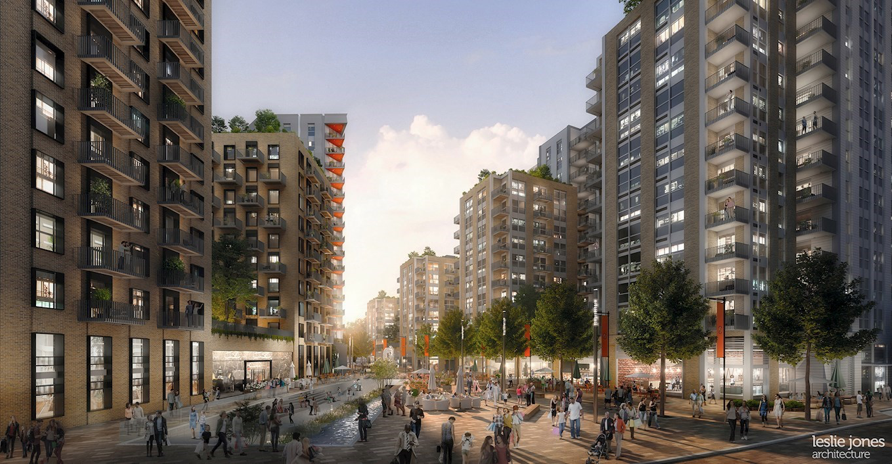 In late 2020, the club signed a Planning Performance Agreement (PPA) with Luton Borough Council in respect of revised planning applications for both Power Court and Newlands Park. The aim of the PPA is to meet all statutory requirements in a timely manner with a target date for determination of April/May 2021.

For Power Court, the new application focuses on changes to the West and East ends of the site. Here the vision is that, from Guildford Street/Church Street, the site will be entered at ground level so that the walk from the town centre will be easy and seamless. By dropping the original vision of steps up to a podium, we can now make use of the River Lea that is currently culverted through the centre of the site in its natural route.

The new plans see the river brought back to life and made into a feature that will add character and a cultural identity to the piazza space at the heart of Power Court.

St Mary’s Church remains a key feature in our design thinking. With the removal of the podium at the West End of the site we reduce the mass of the buildings by a considerable margin. We are also now able to open-up the site to allow greater access from St Mary’s Road.

In the original plans for Power Court, we proposed relocating the River Lea to run down St Mary’s Road. With further work investigations we feel this is unviable and simply does not work as, in practice, the river would sit many metres below the ground and so would look and feel more like a moat or a trench and act as a barrier to access the stadium from St Mary’s Church, the University and the rest of the town centre. Instead, we want to work with the Council and our neighbours to reduce traffic on St Mary’s Road and introduce green space and a high-quality public realm.

In revising our plans for Power Court, we have been able to increase the number of residential units to approximately 1,200 without materially increasing overall building heights. We have also increased our commitment to working with LBC and helping local housing need by volunteering a policy compliant 20% affordable provision on-site.

Diligent followers will have noticed we agreed a ‘non-material amendment’ to the original Power Court planning permission with LBC in December 2020. The purpose of this change was to ensure early delivery of a first phase of housing and commercial space at Power Court. Fronting on to St Mary’s Road we hope to see a start on-site before the end of the year. 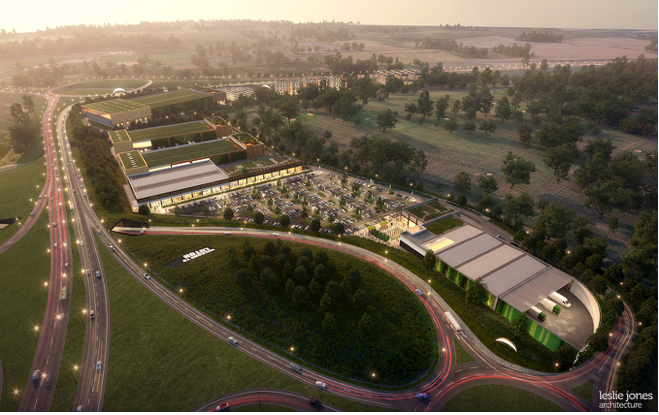 At Newlands Park at Junction 10 of the M1 (pictured above) our plans remain set on delivering a new attractive gateway for the town. The focus has shifted away from a retail and leisure led scheme to one with a broader mix of uses to include business space, research and development, distribution and office uses. We will still seek to deliver retail space, but it will be of a much lower scale than previously planned but still retaining its aspiration.

Newlands Park continues to play an essential role in our plans and its contribution to the local economy is also incredibly important. At a time of wider economic uncertainty, we are seeking to deliver the type of flexible commercial space that successful companies are demanding but without compromise on environmental standards. The potential of the site is unmistakable with its ability to deliver approximately 4,000 new jobs and a contribution of some £240m each year to the Luton economy.

To facilitate the planning process, we have split the Newlands Park site into a West and an East (either side of Newlands Road) and we hope both will be considered alongside our vision for Power Court.

Ultimately our position remains the same in that a stadium at Power Court will not come forward without Newlands Park.

In terms of our stadium plans, we are working within the original planning permission to bring forward a final and detailed design for our club’s new home. In addition to the stadium itself the central area of the site will include a mix of food and beverage, retail, business and community space such that it will be a hive of activity on non-match days. We believe this is critical to making Power Court a genuinely thriving new quarter for the town centre.

We are currently engaged with Historic England in a formal process to gain their feedback and support for our evolving stadium design (with particular focus on the St Mary’s Road frontage). As this process continues through the year, we will be in a position to engage with supporters and wider stakeholders.

We have been delighted so far at the response from the market and businesses wanting to work with us and make our plans a reality. Our consideration of who to work with is incredibly important and we will shortly be able to announce partnerships with sector specialists in residential and commercial development.

We will always seek to keep supporters as informed as possible and our target indicative timetable is: