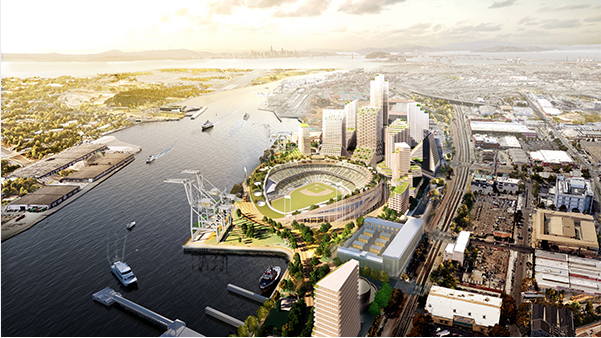 The City of Oakland’s Draft Environmental Impact Report, which the city released today, offers an incredibly thorough analysis showing the path forward for the Oakland A’s privately financed project at Howard Terminal that will be important to the environmental, transportation and housing future of Oakland.

The Draft EIR illustrates how current and future Port activity and a new neighbourhood can not only coexist but also thrive.

The release of the Draft EIR is another important step forward in the process of building a new privately financed ballpark at Oakland’s Howard Terminal.

The analysis shows, along with the plans the Oakland A’s have unveiled, how a once-in-a-generation project like this can contribute to the health and vitality of Oakland, including improved infrastructure and transportation solutions, measures to improve air quality and supplying additional housing.

Opening the Waterfront to the Community

Caring for the Environment for Generations

The Athletics are the last professional sports team in Oakland. We employ thousands of Oakland and Alameda County residents, and local businesses, the City, and County derive significant economic benefits and revenue from our games. While the release of the draft environmental report is a great milestone, it is imperative that the City Council take a vote on the project this year. We look to the City for their support and partnership to keep the A’s in Oakland for generations to come.