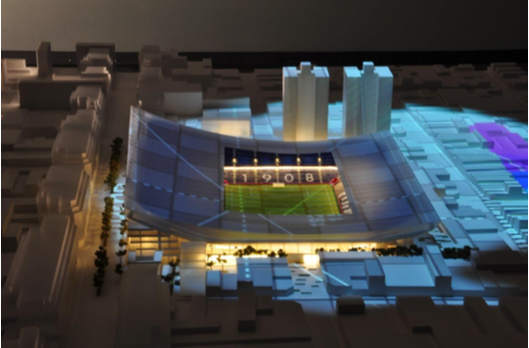 On Monday, at the San Lorenzo Project Interpretation Center, Argentine Primera División side, Club Atlético San Lorenzo de Almagro, presented the integral plan for the implantation of its new stadium in the Boedo neighbourhood, along with the model of the development.

The project falls within the framework of the Rezoning Law project, the first draft of which was approved in the Porteña Legislature and which has led to the mandatory Public Hearing.

It is a dream come true to see the model of the San Lorenzo stadium. It is one more folly that we are now going to spearhead to carry it out. More than a stadium, it is an integral centre with a stadium in the middle. We will do what the neighbours ask of us, fulfilling the real needs that they demanded of us.

Starting Tuesday, and over the next few weeks, the doors of the Center will be open to all San Lorenzo fans and neighbours, so that they can see the proposal first-hand.

Regarding the stadium, Tinelli added:

I really like the roofed part, it is something that I find spectacular. It is a stadium with more than 46,000 seats. I like all the common areas, which will be the ones that people will be part of and, of course, the commercial part, which will be at the head, which for me will be very important.

Diego Rodríguez, an architect of the IDOM design team, explained that this stadium is characterised by a design which physically and socially integrates with the Boedo neighbourhood, with a scale that has been thoroughly studied to integrate into the neighbourhood.

Azcárate added that this is a state-of-the-art stadium, meeting all FIFA and CONMEBOL standards, attentive to the tradition and history of Club Atlético San Lorenzo, which goes beyond football, integrating neighbourhood uses, public and green space, commercial uses in the Avenida de la Plata, grandstands creating an intensity on the pitch and a unique roof that contributes to generating the best football atmosphere, while at the same time boosting the activity of the environment in all aspects.

Click here to watch a video of the event and here to see the mockup model video.