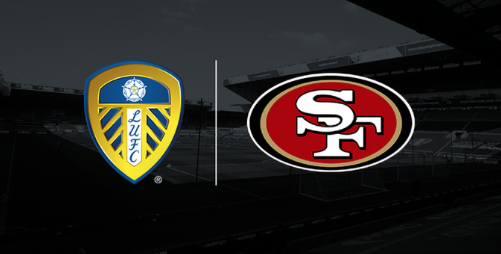 We are delighted to welcome further investment into our club from 49ers Enterprises and I am confident that this latest partnership will help Leeds United continue to grow and develop into the team our supporters deserve.

I have always been open to bringing partners on this journey with me, as long as these actions can benefit the long-term strategy of the club. Paraag and the team at 49ers Enterprises are uniquely positioned to collaborate with myself, Angus Kinnear, Victor Orta and our management team to help us achieve our goals.

This latest announcement builds on a strategic partnership and equity stake initiated in 2018 when 49ers Enterprises purchased 15% of the club from Andrea Radrizzani. The Chairman and controlling owner of Leeds United since 2017, Radrizzani remains the majority stakeholder of the English Premier League (EPL) club.

Our 49ers Enterprises team has always shared Andrea’s vision for constructing a powerful and winning club in the most competitive football league in the world, and the experience of the last three seasons has been more exhilarating than we could have ever imagined. The hard work and bold leadership demonstrated by Andrea and his talented team has restored Leeds United’s rightful place in the Premier League and we look forward to playing an even bigger role in supporting their efforts to climb the table this year and into the future.

The three years of collaboration between Leeds United and 49ers Enterprises has seen the club grow significantly, posting record-breaking commercial revenues, as well as earning promotion to the EPL from the Championship League during the 2019-20 season.

Now that we have achieved promotion and made a positive start to the new campaign, there is no better time to be looking ahead to the future, as we aim to take this football club to the next level, initially by becoming an established Premier League side before chasing our dreams of taking Leeds United back into Europe. We must also be focused on reaching our potential commercially and developing Elland Road and our training facilities.

Marathe – supported by 49ers Enterprises Vice President, Collin Meador, and other key 49ers personnel – will be more involved in the decision-making process and day-to-day operations of the club moving forward, both in football and business operations as he has done for the 49ers for the last 20 years and maintains his place on the Leeds United Board of Directors.

Throughout his tenure with the 49ers, Marathe has served in a number of strategic leadership positions for the National Football League (NFL) franchise. As Executive Vice President of Football Operations, Marathe is well-respected in contract management and negotiations with extensive experience running all aspects of a global sports organisation. While serving as 49ers Chief Operating Officer and team President, Marathe oversaw the innovative design and construction process of Levi’s® Stadium – the internationally recognised state-of-the-art home of the 49ers.

We are increasing our investment in Leeds United now to support and augment the organisational infrastructure needed to remain competitive in the Premier League. We are committed to doing all we can to help the club compete for championships against the best football clubs in the world while providing an elevated supporter experience at Elland Road.