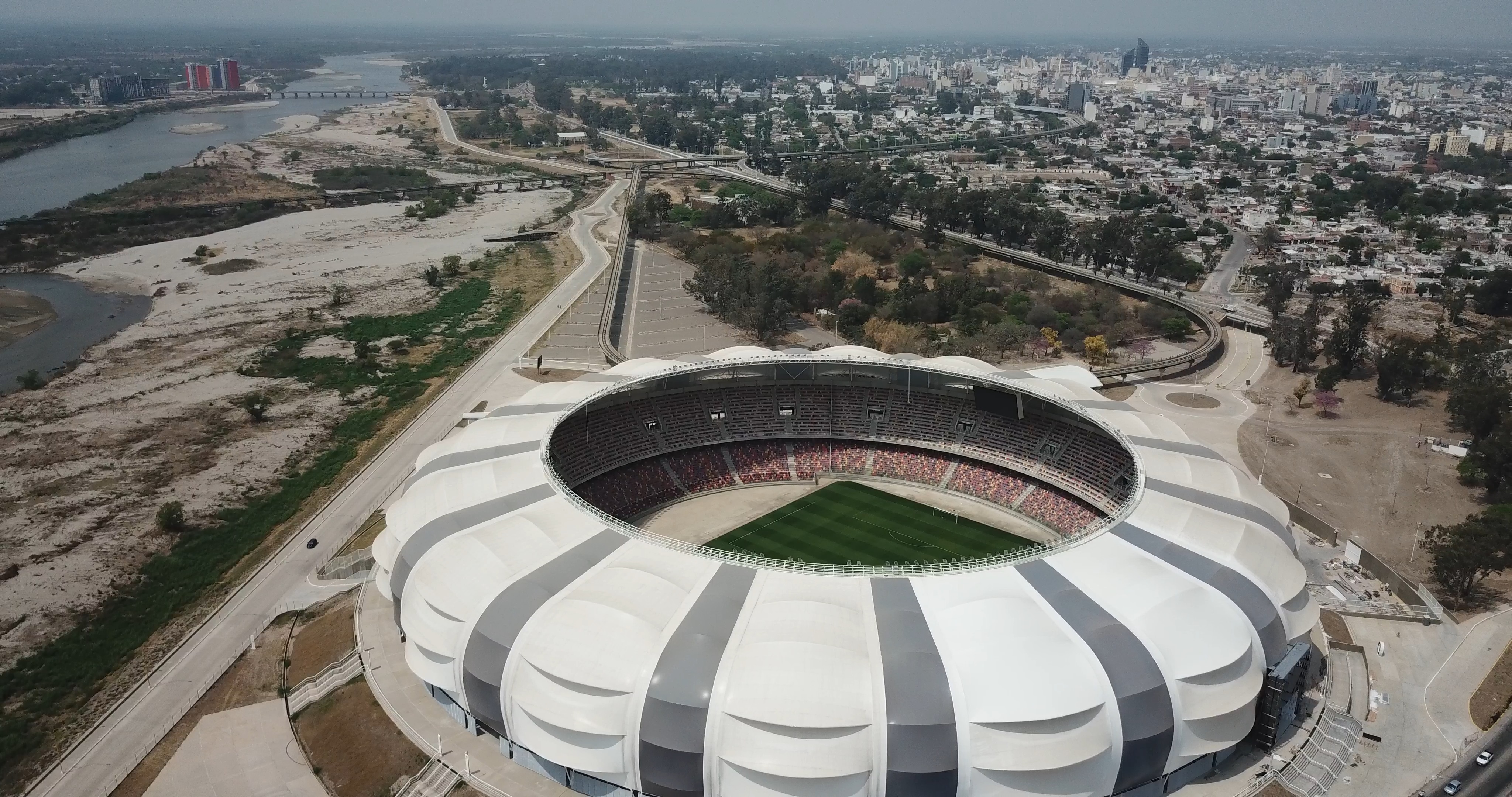 In April 2018, the Government of Santiago del Estero, together with the Argentine Football Association (AFA), began drawing up plans for a new provincial stadium. Although its destiny of serving as a host venue for the 2020 Copa América was derailed due to the pandemic, the stadium was completed nevertheless, its final design complying with all FIFA, CONMEBOL and AFA standards.

The finished Estadio Único Madre de Ciudades consists of a cylindrical covered stadium with a capacity of 28,000 seated spectators, and includes VIP sections, press booths, spaces for catering, and covered parking for 400 cars; as well as a main access plaza and sports museum. It will host some matches during the binational 2021 Copa América in Argentina and Colombia.

It is the first stadium in the country to be designed with the sound system in mind from the early stages of construction, making it one of the most future-proof venues in Argentina.

The audio portion of this ambitious project was entrusted to Equaphon Sistemas de Sonido SRL, an Argentine company with more than 45 years of experience in the professional audio market.

In this type of venue, the safety of the equipment is a determining factor. Thanks to the different limiters offered by the Powersoft amplification platforms, a very high degree of system security is achieved.

As of June this year, all Powersoft amplifier platforms have achieved EN 54-16 certification, which provides an extra layer of certainty to the customer as they now meet the testing and performance criteria to be used as Voice Alarm Control and Indication Equipment / Public Address and Voice Alarm systems.

We’ve been representatives of Powersoft for more than 15 years and have been just as pleased with the performance of the system we deployed at the Estadio Único Madre de Ciudades as we always are. The monitoring functions of ArmoníaPlus in particular, such as impedance measurement, allows the operator to verify the operation of all speaker systems at once, which is invaluable in an installation as complex as this.

The main sound system features stadium voice, emergency and paging functions, and is divided into a number of distinct areas. The team installed a total of 19 Quattrocanali 4804 DSP+D amplifier platforms to cover the majority of the stadium, as well as two Mezzo 322 AD and two Mezzo 604 A for some of the smaller rooms. 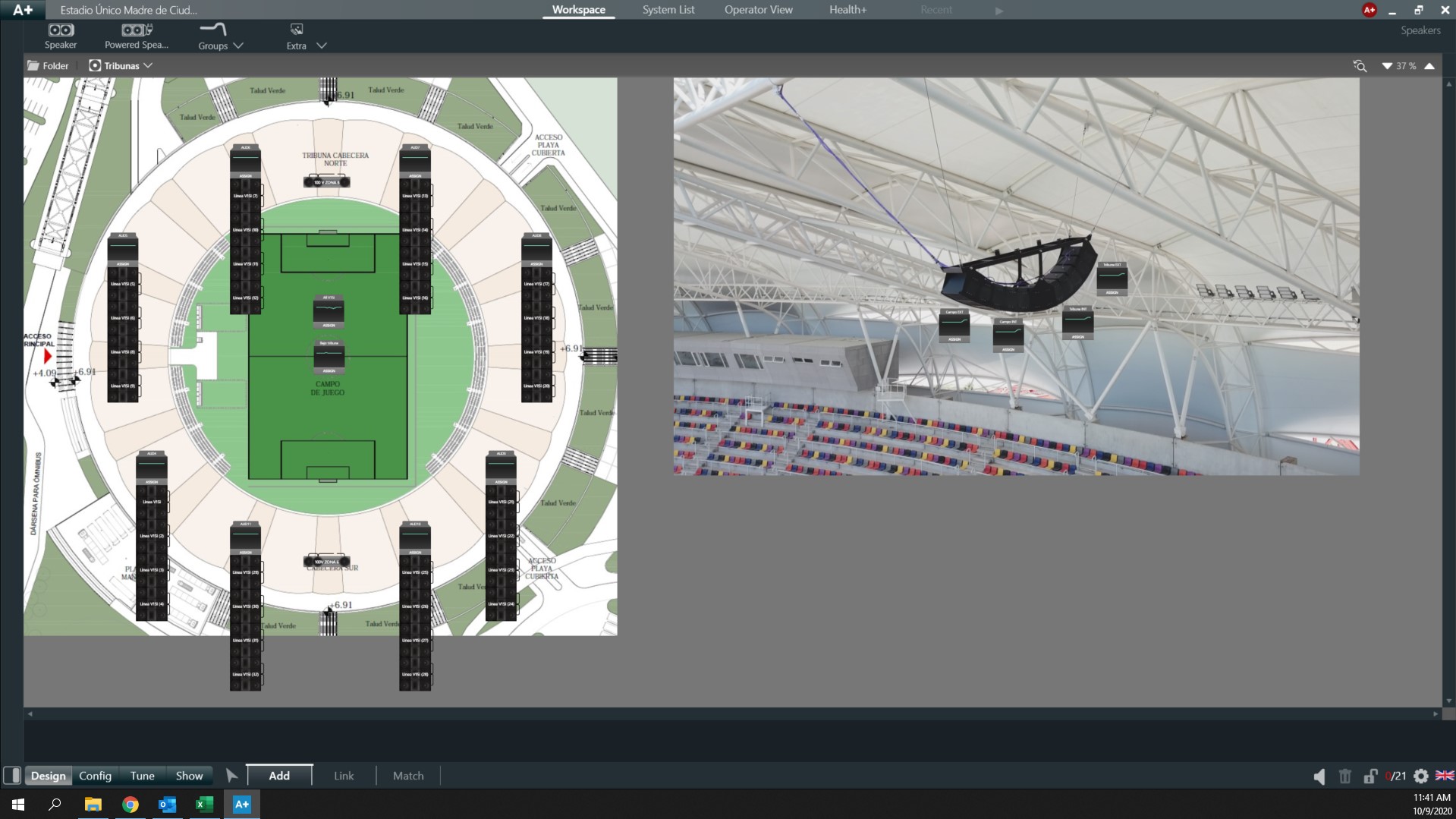 At the design stage of the project, working with acoustic simulations, the team decided to cover this area by hanging up eight arrays from the stadium ceiling, which were made up of 12 Equaphon-manufactured STS Touring Series V15+ cabinets each. This model is an active line array system powered by a two-channel Powersoft D-Cell504 IS module and has a 10” 500 W neodymium speaker and a 1.4” 160 W neodymium driver.

As the system was to be permanently hung outdoors, work was done to optimise it for these circumstances. It became a bi-amped passive box, with a newly designed fixed rigging structure. The amplifier chosen was the Quattrocanali 4804 DSP+D, which drives six cabinets at once.

The system design decentralised the amplifiers by taking advantage of the Dante protocol and the fibre optic ring, distributing them in 11 racks placed at strategic points of the stadium. This minimises cabling, which, in turn, reduces costs while allowing for the maintenance and inspection of the amplifiers without the need to disturb the whole system.

In the north, east, and south stands, the high tray blocks the coverage of the upper part of the low stalls. For that reason, 100 V line speakers are used to reinforce that area, which is amplified by two channels of another Powersoft Quattrocanali 4804 DSP+D.

Both the home and the visiting teams will have access to video rooms where the coaching staff can play motivational or tactical videos. Both rooms have an STS Touring Series mikra4 stereo setup and a mikraSub12 subwoofer as a complement; all of which is powered by a Powersoft Mezzo 604 A.

The final rooms, where press conferences are due to be held, features two portable STS Touring Series Suono8 systems in a stereo configuration. Each one includes a 15” powered subwoofer and a column with 8 3.5” speakers and is powered by a Powersoft LiteMod HV module and processed with a DSP-Lite. As it is a portable and active system, the user has the flexibility to locate them as required by the application.

A video chronicling the installation (with English subtitles) can be found here: https://youtu.be/HGvxWsukX4E

The event will feature a high-level conference, exhibition and networking events, as well as technical tours of Anfield, Goodison Park and M&S Bank Arena. NB: The microsite is now ‘live’, enabling registered attendees to start networking, so make sure to secure your place at this industry-leading event.