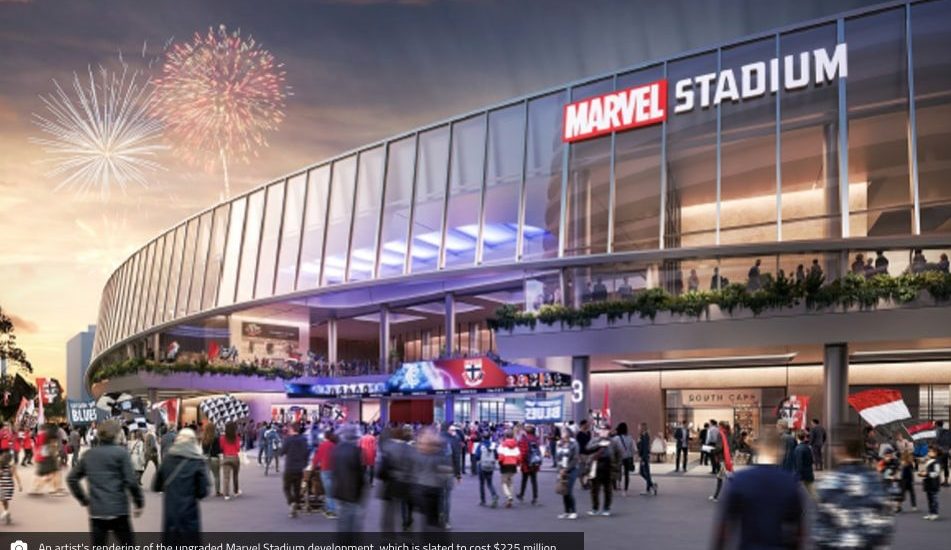 The AFL in conjunction with the Victorian State Government, has revealed the designs for the Marvel Stadium and Docklands precinct upgrade, which will deliver a 365-day-a-year hub for all things sport and entertainment. The AFL-owned venue is set to be transformed into ‘one of the best sports and entertainment destinations in the world’.

The Minister for Tourism, Sport and Major Events, Martin Pakula, helped unveil the initial designs from renowned architects Grimshaw with Smartform, and announced that the project will shortly go out to tender to deliver the transformation of Marvel Stadium.

The Marvel Stadium and surrounding precinct works will include revitalised eastern and southern entry points, including a new ‘Town Square’ transforming the space into a seven-day-a-week, open and accessible area to gather Monday to Sunday or when attending a sporting event or concert.

A new city-side extension will include function rooms with views of both the arena and CBD as its backdrop.

The signature new Town Square plaza will welcome pedestrians arriving on the Bourke Street footbridge from Southern Cross Station – a combination of indoor and outdoor spaces with some stadium walls removed to provide a visual connection to the field of play.

Markets and community gatherings will fit naturally in the space, while hospitality businesses on two levels will be open to the public and able to be converted to ticketed areas for AFL matches and concerts.

The fan experience will be enhanced with major renovations to public food and beverage areas connecting into the arena and overlooking the field of play. More spaces will be provided to catch up with friends pre-, during and post the match. Two new and bigger scoreboards will hang from the roof at either end of venue. And a new sensory room and changing places facility will ensure Marvel Stadium is a place that welcomes people of all abilities.

There will be a further boost to the event-day experience through improved lighting and technology upgrades throughout the stadium. Home clubs on a matchday will be able to fully integrate their brand and club colours into the exterior and interior of new development – from the concourse, new entrances and through to function rooms.

Athletes will also be supported with upgrades to the team facilities to provide state-of-the-art male and female changerooms.

AFL Chief Executive Gillon McLachlan said the upgraded design will deliver the best experience for fans in stadium and visitors to the precinct:

The Marvel Stadium precinct will be one of the best sports and entertainment destinations in the world, with its proximity to the city and a world class entertainment and food offering pre-and post-event.

The designers have captured our desire to amplify the stadium’s ability to host multiple events across a calendar year and ensure fan experience has been front of mind when designing the upgrade. By renovating the existing structure, it will provide a more environmentally sustainable way of building, as well as ensuring minimal disruption to fans.

On behalf of the AFL I want to thank the Victorian Government for their continued partnership across both elite and community football.

Construction will begin in 2021.

Pre-pandemic, the venue hosted more than 75 sport and entertainment events annually from the AFL Premiership season, Big Bash cricket to concerts of major acts like Taylor Swift, U2 and Ed Sheeran. This revitalisation will ensure Marvel Stadium continues to attract the biggest major events.

Working in partnership with the Victorian Government, the revitalisation of Marvel Stadium will help build on the venue’s global reputation as an entertainment hub.

The project is part of the Victorian Government’s $225m partnership with the AFL, which in addition to the transformation of Marvel Stadium, secured the Toyota AFL Grand Final at the MCG until at least 2058, delivers a better deal for fans and clubs across Victoria and includes a continued partnership across a range of sport development programs to support multicultural, Indigenous and women’s football.

The upcoming hybrid edition of ALSD International will focus on increasing revenue via new builds, renovations, service expansions & technology, and reopening with confidence.

It will be complemented by tours of Anfield, Goodison Park and M&S Bank Arena, with an innovative app and microsite – powered by Ungerboeck – providing attendees with unrivalled opportunities to network pre, during and post event.