In this interview, Danny discusses the challenges of COVID-19 and speaks about the out of the box thinking that has seen the EFL Sky Bet League Two side grow domestically and globally, and the “exceptionally strong board” and “proactive initiatives” which are driving revenue at the Club.

In this interview, Danny, who has enjoyed 13 years of sports administration, firstly, eight years in various senior marketing and commercial roles at Essex County Cricket Club, two as Commercial Director at Southend United and approaching three years as CEO of Leyton Orient Football Club, speaks about how Orient has been truly innovative in their approach during the pandemic.

Firstly, the successful FIFA ‘QuaranTeam’ competition launched by the Club drew participation from 128 teams across the globe generating exceptional coverage and social media reach. This was then added to with a very innovative and unique shirt sponsorship by no other than England Captain, Harry Kane (ex Orient loanee). All of which generated much needed revenue, extraordinary global coverage and unprecedented replica shirt sales.

As we’re reported over the past few months, Orient is a Club well known for its innovative thinking, with concepts like pitch side dining proving hugely popular, as was highlighted by the fact that the first set of dates sold out in less than 48hrs, with a second set recently announced. Danny highlights how the Breyer Group Stadium has seen usage grow from around 1% to 20%, and has yet more plans afoot to continue this upwards trajectory.

Danny also speaks about the importance of sharing best practice and learning from others, both from within your own sport and other leagues, as well as wider sectors, specifically pointing to their UK/US ownership, which has seen him visit with the likes of the Boston Red Sox, New England Patriots, Boston Celtics, and a number of other teams to see how they do things thanks to Orient’s Boston-based Chairman & Co-Owner, Nigel Travis, who is also CEO & Chairman of the Dunkin’ Brands. 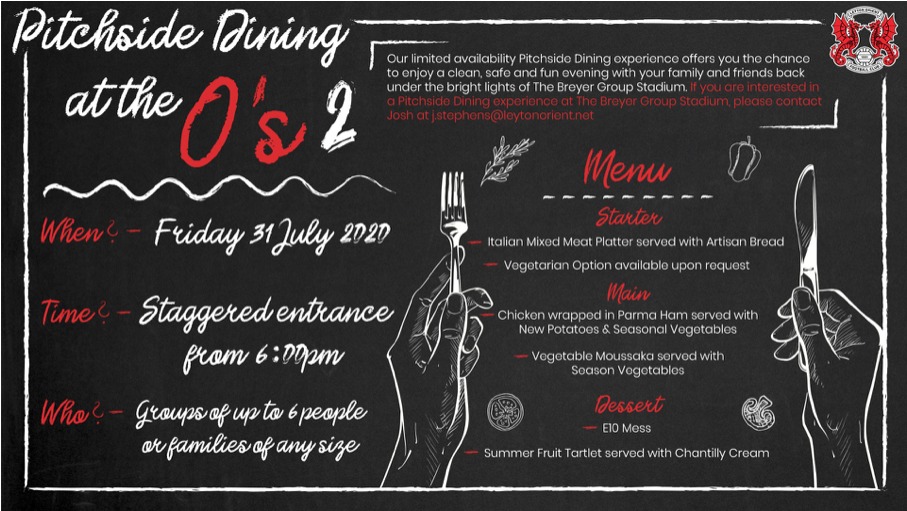 Orient has strong ties with the local community and its partners, as was highlighted back in March, when the Club confirmed that the Breyer Group had extended their stadium naming rights agreement into the 2020/21 season.

Danny said at the time:

Leyton Orient are a professional football club based at the The Breyer Group Stadium, Brisbane Road in Leyton, East London, England.

For more details, visit the official club website at www.leytonorient.com

The next edition of ALSD International – Europe’s leading event for the Premium Seat & Sports Hospitality sector – is being hosted at the home of the newly crowned Premier League champions, Liverpool Football Club’s Anfield Stadium, October 12-13, and will examine how to increase revenue through new builds, renovations, service expansions and technology. The physical event will be complemented by virtual elements to ensure that no one misses out.