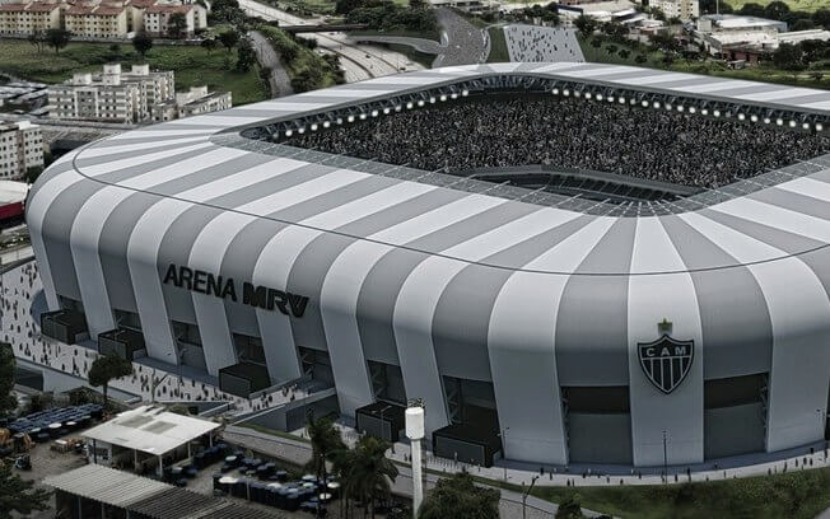 Clube Atlético Mineiro’s dream of having a new stadium took a step closer to becoming a reality this week, as earthworks got underway on the site of what will become the new MRV Arena.

With a capacity for 46,000 fans, the new home of Brazilian side, Clube Atlético Mineiro (CAM), commonly known as Atlético Mineiro or simply Atlético (and colloquially as Galo, meaning ‘Rooster’), will be built in the California neighbourhood, in the Northwest region of Belo Horizonte (Minas Gerais/MG).
The team competes in the Campeonato Brasileiro Série A, the premier league of Brazilian football, as well as in the Campeonato Mineiro, the top tier state league of Minas Gerais.
Atlético President, Sérgio Sette Câmara, highlighted his joy at the beginning of this important stage in the construction of what will be the best and most modern stadium in the country, stating on the Club’s website:

It is a very special moment for Massa Atleticana. Our dream of having our own stadium is beginning to become a reality. It is a great gift and a huge pride for all Athletes. I sincerely thank everyone who is helping Galo to build the best arena in Brazil.

Vice-President of Atlético’s Deliberative Council and one of the main supporters of the project, MRV’s President, Rafael Menin, also celebrated the effective opening of the works, saying:

The MRV Arena had its installation license approved on December 21, 2019. The enclosure of the environmental reserve began on January 28 this year, together with the vegetation suppression, which consists of the management of some animal and plant species on the land.
Arena MRV CEO, Bruno Muzzi, emphasised the importance of this new stage of the enterprise:

This is one of the main milestones at Arena MRV since the installation license was approved. For us, it is a cause for great joy to reach the earthworks stage, as our planning is taking shape. For years, we have had a multidisciplinary team committed to the project and I see that we are very aligned so that each stage goes according to the established schedule.

With the current scenario of the COVID-19 pandemic, the construction site will respect the determinations of the current municipal and state laws and will strictly follow all safety and hygiene protocols, as a way to prevent the spread of the coronavirus, as Muzzi highlighted:

We go to great lengths to protect employees at the construction site. The suppression phase continued in the last month, with great security and awareness. We are all respecting social distance and following all recommendations.

About the MRV Arena

The MRV Arena will have capacity for 46,000 fans and will be a multipurpose arena, with complete structures and flexibility in place to host shows and other non-sporting events. It is estimated that the completion of the works will take in the region of 30 months.
The project includes 40 bars, 68 cabins and 2,400 parking spaces, in addition to a green area of ​​34,000m².
The 130,000m² of land on which the MRV Arena is being built was donated to Atlético by businessman Rubens Menin.
The company responsible for the construction is Racional Engenharia and approximately R$80m will be used to improve the urban infrastructure of the region.
Source: https://www.atletico.com.br/home
Images, courtesy: Clube Atlético Mineiro