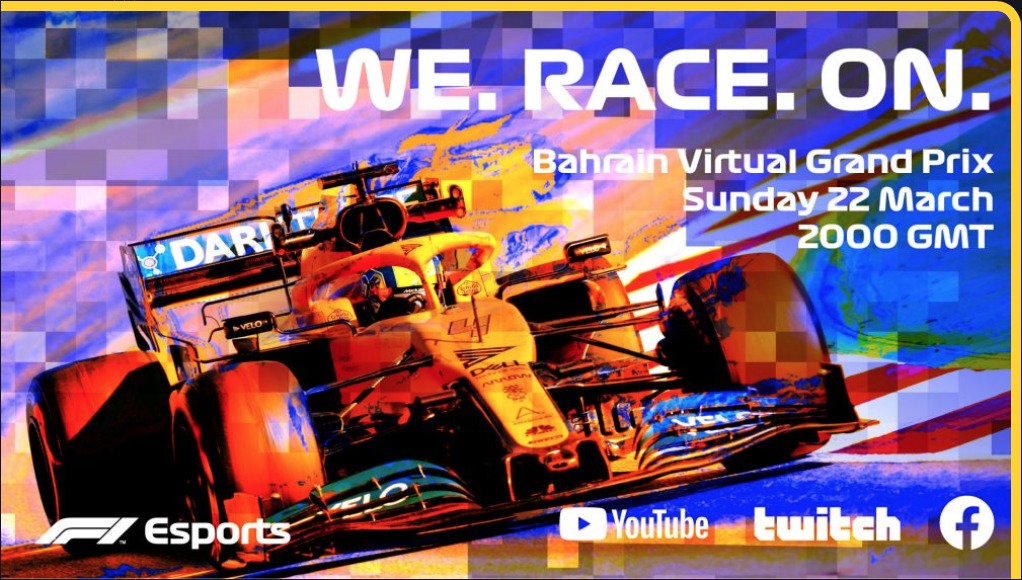 Formula 1® launches new F1 Esports Virtual Grand Prix series, featuring a number of current F1 drivers, along with famous faces from the wider world of sport, music, etc. The series has been created to enable fans to continue watching Formula 1 races virtually, despite the ongoing COVID-19 situation that has affected this season’s opening race calendar.

The virtual races will run in place of every postponed Grand Prix, starting with the Virtual Bahrain Grand Prix on Sunday March 22. Every subsequent race weekend will see the postponed real-world Formula 1 race replaced with a Virtual Grand Prix*, with the initiative currently scheduled to run until May**.

The first race of the series saw current F1 drivers line up on the grid alongside a host of stars. In order to guarantee the participants safety at this time, each driver joins the race remotely, with a host broadcast live from the Gfinity Esports Arena (or remotely if required) from 8:00pm (GMT) on Sunday March 22.

The series will use the official F1 2019 PC video game, developed by Codemasters, and the first virtual GP on the Sakhir track will be a 50% length race with 28 laps. The broadcast, which will be available on the official Formula 1 YouTube, Twitch and Facebook channels, is expected to run for 1 hour 30 minutes, with a qualifying period where grid positions will be determined based on the drivers’ fastest lap time.

Due to the wide variety of gaming skill levels amongst the drivers, game settings will be configured in such a way to encourage competitive and entertaining racing. This includes running equal car performance with fixed setups, reduced vehicle damage, and optional anti-lock brakes and traction control for those less familiar with the game.

F1 and coronavirus: An update from Formula 1 CEO Chase Carey

The series is strictly for entertainment purposes, to bring racing action to fans in this unprecedented scenario the world has been affected by, with no official World Championship points up for grabs for the drivers.

During non-race weekends, Formula 1 will also be hosting online exhibition races, where fans from around the world will be given the chance to go head-to-head with F1 drivers. More details of these events will be available across the official Formula 1 social media channels in the coming weeks.

We are very pleased to be able to bring some light relief in the form of the F1 Esports Virtual GP, in these unpredictable times, as we hope to entertain fans missing the regular sporting action. With every major sports league in the world unable to compete, it is a great time to highlight the benefits of esports and the incredible skill that’s on show.

We’re excited to be a part of the new F1 Esports Virtual Grand Prix Series. With sporting events currently on hold around the world, it’s great that the official F1® video game can help fill the void by bringing together an exciting line-up of talent to race online during the postponed race weekends. It’s going to be competitive, action-packed, and a lot of fun for everyone involved.

Gfinity is proud to be playing its part in the design and delivery of the F1 Esports Virtual Grand Prix series, which will bring exciting virtual racing to a legion of Formula 1 and Esports fans around the globe. The virtual Bahrain GP will feature all the thrills and spills of racing with F1 drivers and special guest celebrities going head-to-head, which promises to put a smile back on the faces of millions of sports fans.

*Grands Prix not available in the 2019 official F1 video game will be replaced with an alternative Grand Prix.

**The F1 Esports Virtual GP initiative will be extended beyond May if the coronavirus pandemic results in further Grand Prix cancellations/postponements. 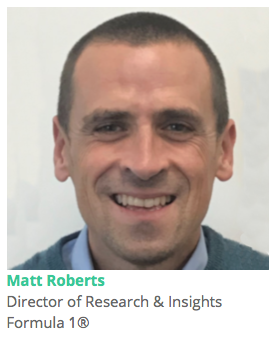 Formula 1®’s Director of Research & Insights, Matt Roberts, is one of the many industry expert speakers confirmed to share insights during the next edition of ALSD International; Europe’s leading event for the Premium Seat & Hospitality sector being hosted at Liverpool Football Club’s iconic Anfield stadium.

The high level conference will focus on how to increase revenue through new builds, renovations & service expansions, and also include behind-the-scenes venue tours, networking events, access to 1-on-1 meetings, and an exhibition showcasing the latest products, services & solutions. In light of the global COVID-19 crisis, the conference will also include sessions on how clubs, stadiums, venues and event organisers can look to recoup lost revenue and put more stringent systems in place moving forward.