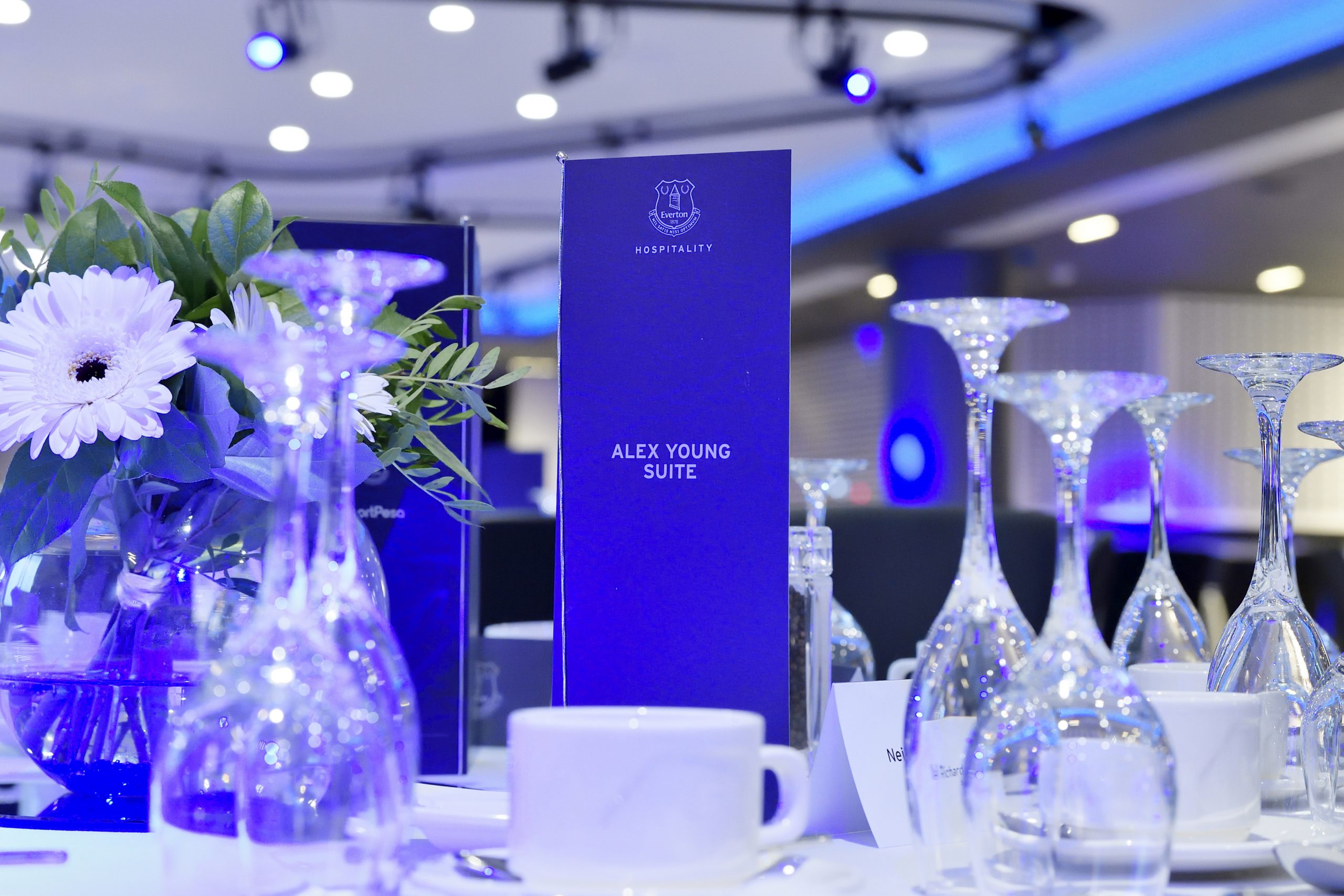 Premier League side, Everton Football Club, invested in a major renovation project last year, which saw the transformation of Goodison Park’s hospitality lounges, with all of the stadium’s suites and event spaces refreshed and upgraded.

Work on all nine hospitality lounges took place during last year’s close season, with a full transformation of the lounge appearances, along with updates to audio-visual equipment, all completed ahead of the 2019/20 season.

Ahead of the Club’s proposed move to Bramley-Moore Dock, subject to planning approval, the multi-million pound investment has improved matchday facilities for Members, while showcasing and testing new concepts which the Club could look to take forward into a new stadium.

Oliver Wright, Head of Hospitality and Sales at Everton, said prior to the project’s commencement:

This project will help us bring Goodison Park’s hospitality offer up to a level which reflects the aspirations of the Club. The refurbishments to all our lounges will enhance the experience for Members and demonstrate what our approach to hospitality at a new stadium could be like.

The Club’s more informal lounges, The People’s Club and The Captains’ Table have both benefitted from an upgrade, creating a ‘sports bar’ feel with industrial textures, modern loose furniture, better positioned big screens and colourful Everton graphics. The new brushed concrete flooring sees both lounges paying homage to Goodison Park’s concourses and the raised uplifted ceilings give both refurbished spaces an airier feel. The People’s Club now has an island feature bar, whilst The Captains’ Table features artwork that salutes the Club’s illustrious former skippers.

The Joe Mercer Lounge, which is accessible from Goodison Place, has been refurbished in the same vain, with contemporary warehouse décor, new timber flooring and modern loose furniture. A range of new street art graphics on the walls pay tribute to World War II hero Mercer who won two league titles at Goodison Park between 1932 to 1946.

Two of the Club’s ‘food inclusive’ lounges, The 85’ Lounge and The 1878 Brasserie, have been redesigned to maximise their available space with a palate of Everton Blue, greys, polished metal, as well as raised ceilings helping to deliver a sophisticated makeover. New timber flooring, banquet and loose furniture give the rooms a modern bistro feel, whilst celebrating the heroics of the Club’s most successful ever season (1985) and founding year (1878).

One of the Club’s most popular event spaces and matchday lounges, The Alex Young Suite, now sports a new décor of muted and neutral tones offering Members a brighter and more elegant setting to enjoy their three-course meals on matchdays. Enhanced mood lighting creates an ambiance that can be altered to suit different occasions, functions and events. New graphics and memorabilia celebrate Alex Young, who was adored by fans as ‘The Golden Vision’ and recognised as one of the Club’s greatest ever players.

The Brian Labone Lounge received an elegant and sophisticated modernisation, with new furniture, audio-visual screens and enhanced lighting giving Members of the Club’s most sought-after lounge a premium environment, fitting of one of the Club’s greatest ever defenders and Evertonians.

The ultimate matchday experience can now be experienced in The Dixie Dean Suite.The Club’s exclusive, fine dining lounge, which now benefits from a modernised warm and sleek fit-out with the introduction of plush leather, pendant lighting and a newly positioned bar. The opulent room with private tables pays tribute to the Club’s greatest ever goalscorer, who still holds the record for the most goals (60) scored in one season.

For organisations who have invested in matchday sponsorship packages, the Club’s Sponsor’s Lounge has seen a more futuristic makeover. New modern furniture and audio-visual equipment has been installed, as well as a new entrance to the lounge which means improved access on matchdays.

Hospitality Lounges at Goodison Park have, and continue to be, sold out for a number of seasons and the move to Bramley-Moore Dock will enable the Club to further expand its hospitality offering.

The exciting new concepts we have created are uniquely Everton and will be a test bed for themes as well as an opportunity to expand the appeal of our hospitality experiences in the future.

The Club worked with 2M2 Studio, the architectural firm responsible for delivering the first-class facilities at the Royal Liver Building for the designs of all nine hospitality lounges at Goodison Park.

For more information on the Club’s Hospitality offer or to secure a place on the waiting list for any of the lounges, please email Hospitality@evertonfc.com

Everton’s Oliver Wright, Head of Hospitality & Sales and Aidan Miller, Stadium Development Head of Finance, were both in attendance at the 2019 edition of ALSD International. Attendees at this year’s event will benefit from a behind-the-scenes tour of the newly-transformed hospitality lounges at Goodison Park, as well as a networking luncheon, before being whisked to Liverpool FC’s Anfield stadium; host venue for ALSD International 2020.

Industry professionals will hear from the likes of G2 Strategic CEO, Marshall Glickman, 20.20 Strategy & Development Director, Michael Artis, and Borja Gonzalez, Stadium Business Manager, Athletic Club Bilbao, who will join a special panel session with other executives from LaLiga clubs on how to increase revenue through new builds, renovations and service expansions.

#ALSD – leading the Premium Seat industry for the last 30 years