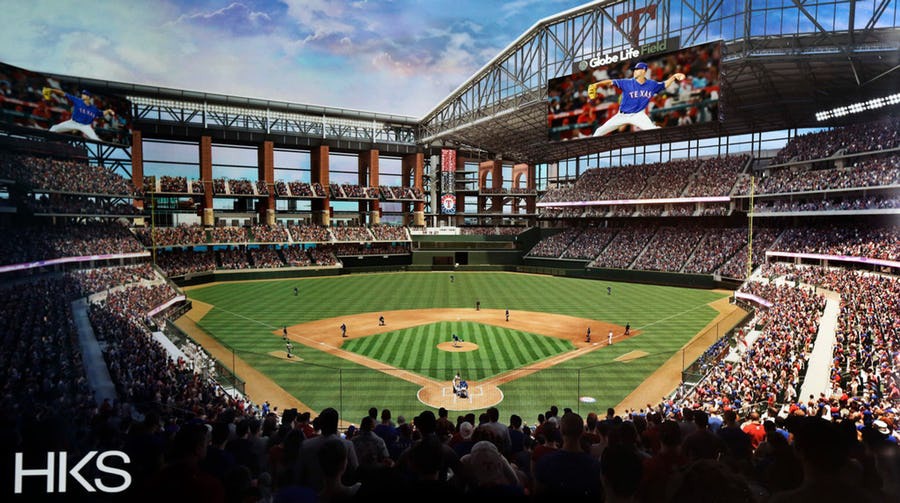 The Texas Rangers have chosen the fully drivable cover system terratrak® plus-ID, by Terraplas, for their new ballpark, Globe Life Field, opening in March of 2020.

We are ecstatic to purchase 133,000 square feet of terratrak® plus-ID. It has the ability to both cover and protect our playing surface for major events. We conducted a thorough review process in search of a product that was best suited to handle the diversity of events we are striving to accommodate.

Sean summarised the Rangers management team decision with this statement:

In the end, we felt the fully-drivable terratrak® plus® ID system best suited our needs to protect the playing surface, enhance production capabilities and ultimately provide a world-class atmosphere for our fans.

Robert Else, Terraplas Chairman, and the originator of the Terraplas brand in 1991, had this to say about the product the Rangers chose:

The terratrak®plus-ID is the latest version of the extremely successful terratrak® line of products that was first introduced in 2010. The ID refers to the cover system being used ‘Indoors’, and it fits perfectly with the synthetic turf and the retractable roof design at the new Globe Life Field.

Michael Beane, Director of Sales for Terraplas in the Americas, added some final comments when discussing the lengthy warranty that was offered with the ID product:

Over the last 10 years, the Texas Rangers regularly rented the terratrak®plus product, so they were very familiar with its superior strength and longevity.

The Texas Rangers will now add Globe Life Field to the prestigious list of stadiums that own terratrak®plus, such as Levi’s Stadium, home to the San Francisco 49’ers, the LA Coliseum home to USC and the LA Rams, Dignity Health Sports Park (formally Stub Hub Center) home to the LA Chargers and the LA Galaxy, and Paris La Defense Arena in France, home to Racing 92, as pictured.

This Press Release has been distributed with the permission of the Texas Rangers Baseball Club.

The new Globe Life Field, which is being built as a public-private partnership between the City of Arlington and the Rangers, will not only be the team’s new home but also a multipurpose sports and entertainment venue that will include capabilities for hosting high school, college and international sports, as well as entertainment tours.

Globe Life Field – designed by HKS and being built by Manhattan Construction – is expected to open in March 2020 in time for the Rangers’ season.

The official groundbreaking for Globe Life Field took place on September 28, 2017, with construction beginning the following week. The new 1.7 million square foot ballpark, which will be located on 13 acres just south of the current Globe Life Park in Arlington, will include a retractable roof – the first retractable roof beam truss having been installed this week – for climate control and shelter for fans during the hot summer months.

The new ballpark’s seating capacity is expected to be approximately 43,000.

Terraplas is a long-standing VIP Sponsor of Sports Venue Business (SVB). For further details on their world-leading products and global portfolio, click on their banner below…