JMA has announced the completion of the final design phase of its 5G millimetre-wave product, specifically designed for in-building, enterprise and factory applications.

This considerable milestone paves the way for formal testing with mobile operators that have acquired millimetre wave spectrum.

JMA’s 5G in-building focused solution has been designed to meet the stringent quality and reliability requirements critical to complex millimeter wave deployment scenarios, and is composed of two elements:

The announcement was made during a 5G focused event on July 11 in Castel San Pietro Terme, Bologna Italy, organised by JMA in collaboration with the Art-ER Agency and the Emilia Romagna Region.

The event was attended by members of the press, local technology partners, mobile operators, and government officials Stefano Bonaccini, President of the Emilia Romagna Region, and the US Consul General Benjamin V. Wohlauer.

This development milestone unites two groundbreaking platforms into a single end-to-end solution, providing an in-building solution not available to date due to the size and scale required to support millimetre wave technology.

An important element of the development process was JMA’s ongoing collaboration with Intel, the local carrier community, as well as local system integrators, understanding each of their unique challenges.

JMA has been active in the Intel Network Builders program since 2018. The XRAN platform is the only 100% LTE software based platform that runs on commercial Intel processors using x86 architecture. The 5G solution presented includes a radio component using Intel technology, including Intel® Xeon® and Intel® PAC N3000 FPGA.

Pat Mead, FPGA Sales Director in the Network and Custom Logic Group at Intel, attended the event as a speaker, while Telecom Italia (TIM) was among the carriers represented.

5G, which TIM has already launched with macro coverage in Turin, Rome and Naples and will soon be available in other major Italian cities, marking a radical change in the way in which wireless technology enters our personal and work life. JMA is one of our established technology partners, and we are looking forward to seeing their 5G in-building solution in our Turin lab.

I am excited and honoured to have had the opportunity to present our 5G solution in the presence of guests so important to us: from the Region that supported our development projects to our partners who believed in us and continue to support and trust our development capabilities.

JMA Wireless designs and builds next generation in-building and outdoor mobile wireless systems, delivering the industry’s most powerful technologies that enable LTE, 5G, and CBRS services on mobile operator networks worldwide. The company’s XRAN™ leads the industry with the only 100 percent virtualised RAN platform, combined with its TEKO, NWAV, and RF distribution technologies. JMA Wireless is a US-based company with manufacturing, R&D and sales operations in over 20 locations worldwide.

JMA Wireless is a VIP Sponsor of Sports Venue Business. For more information on the company’s world-leading solutions, simply click on the banner advert below…

Make sure to check out our interview with JMA Wireless Senior Vice President of International Business, Andrea Casini, filmed on site at Johan Cruijff ArenA during World Stadium Congress… 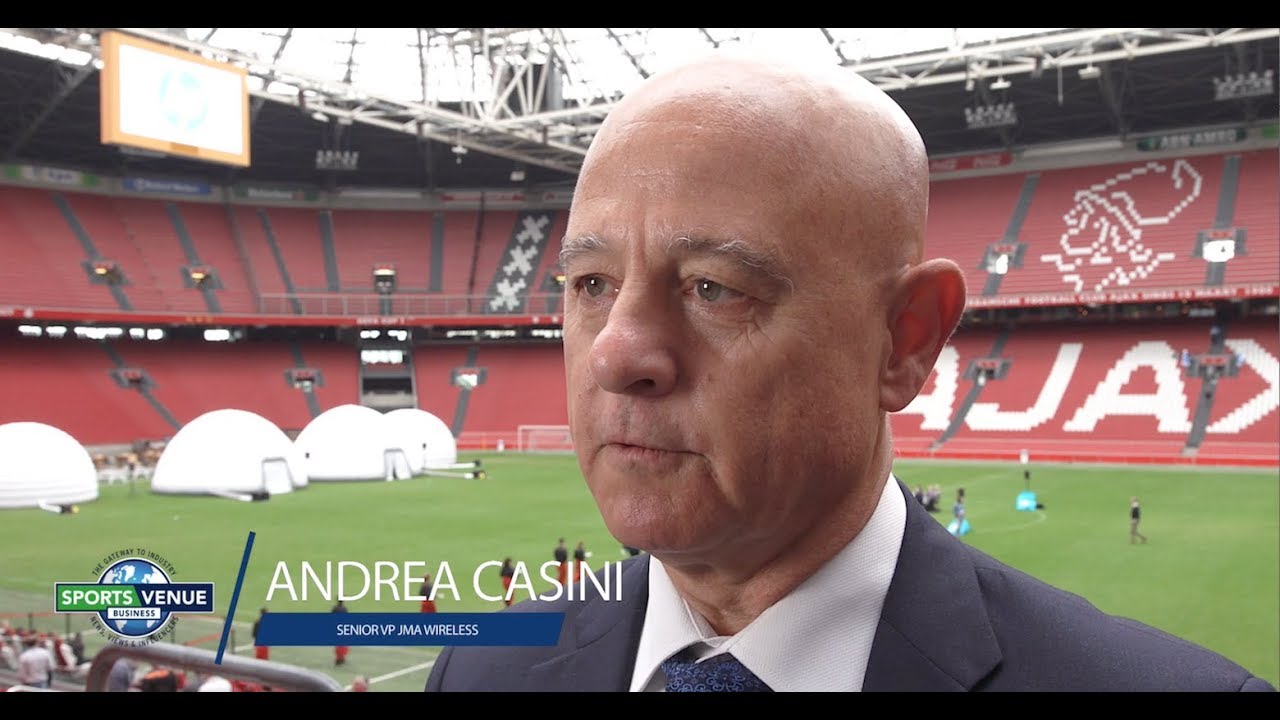