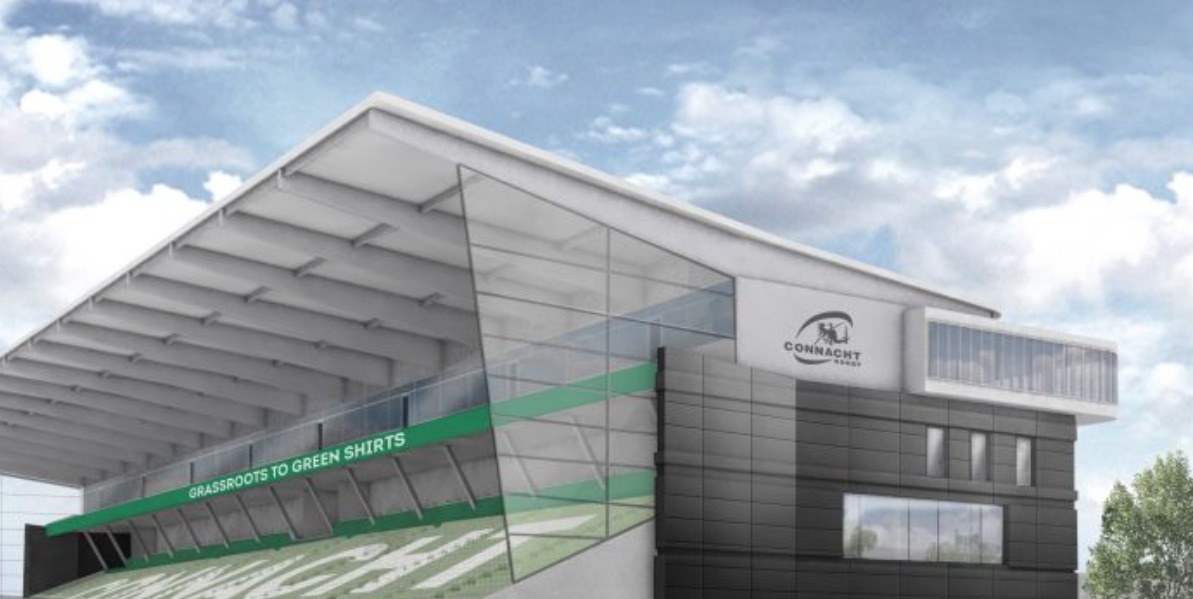 An Taoiseach Leo Varadkar T.D. was the special guest at the Sportsground last Friday, as Connacht Rugby announced that its redevelopment on College Road is now “shovel ready” with full planning permission secured.

The initial redevelopment plans were launched following an arrangement reached between the Irish Greyhound Board and the freehold owners of the Sportsground, the Galway Agricultural and Sports Society, with respect to a shared vision for the future of the Sportsground.

During his visit, Mr Varadkar was introduced to the professional playing squad who were hosting a community visit for 200 children from Scoil Chaitríona NS, Renmore. He was also briefed in detail on the progress of the Sportsground redevelopment, which involves licence agreements with Special Olympics Ireland and the Community Games for use of the upgraded facilities.

The €30m project will include a full redevelopment of the stadium, as well as a multi-use indoor High Performance Training Centre. With €10m in private funding approved through a mixture of Connacht Rugby funds and an approved bank credit facility, the state investment of €20m is now critical to the delivery of the project. The project has been the subject of an independent economic appraisal by economist Dr Kevin Hannigan of KHSK Economic Consultants who found through a cost benefit analysis that the project will yield a net benefit of 53%.

The strategic benefits of the project to the entire region are also closely aligned with the Government’s National Planning Framework, Project Ireland 2040 as well as the National Sports Policy, all of which highlight the need for a regional spread of capital investment throughout the country. It also fulfils the need for improved sports infrastructure in the region, identified in the Galway City Development Plan.

Welcoming An Taoiseach to the Sportsground, CEO of Connacht Rugby, Willie Ruane, commented:

We are delighted to have An Taoiseach in the Sportsground to receive an update on our redevelopment project. There has been huge momentum behind the project since we announced last October, and we now have the final granting of planning permission. With 130 people employed throughout the province by Connacht Rugby we are extremely proud of the annual contribution of €34.4m we are making to the regional economy. We have €10m in private funding to bring to the table through a mixture of Connacht Rugby funds and an approved bank credit facility. The project is now shovel ready and the remaining €20m state investment is critical to its delivery.

As part of Connacht Rugby’s announcement of planning permission for the Sportsground development their new video “HOME’ was also launched by An Taoiseach on his visit. The short film was produced by award-winning film maker Lorcan Hynes from Foxford, County Mayo, and shot in various locations around the province over the past few months. The film highlights the people and the diverse nature of the landscape of the West of Ireland.

Commenting on the video, Ruane added:

The concept of the film is based on Connacht Rugby’s purpose which goes beyond the role of rugby and represents everything that is good about the province of Connacht. The video coincides with our journey to build a new home at the Sportsground, but our home and our purpose extends far beyond that to every corner of the province.

Brian Mahony, Head of Commercial & Marketing at Connacht Rugby, is one of a host of industry expert speakers confirmed to share insights at the 2019 edition of ALSD International – Europe’s leading event for the Premium Seat & Hospitality sector – coming to the iconic Croke Park Stadium in Dublin this October, 28-29.